It’s remarkable, really, for a country where operatic origins run shallow, that some of the greatest internationally recognised proponents of the bel canto style have been Australian.

There was Dame Nellie Melba in the late 19th and early 20th centuries, then Dame Joan Sutherland and her husband, Maestro Richard Bonynge, in the mid-late 20th century. 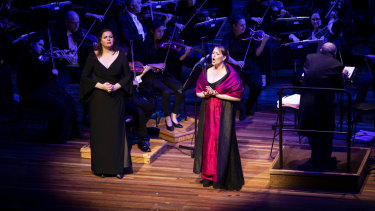 And now Jessica Pratt, whose annual return to Victorian Opera has given Melburnians the chance to hear a voice that has wowed the public and critics alike in New York, London and all over Italy.

But it’s a reflection of great casting and the strength of Victorian Opera’s young artists that in a program of exclusively her specialty repertoire, Pratt doesn’t particularly stand out.

Bel canto, or “beautiful singing”, is an Italian style of vocal performance which peaked in the early 19th century. Today’s most commonly performed bel canto composers are Rossini, Donizetti and Bellini – music that demands supreme virtuosity, breath control and beauty of tone on behalf of its singers.

The highlight of Act II was a Rossini duet performed by young Melbourne bass-baritone Stephen Marsh and Barcellona, providing lots of laughs and superbly matched vocal depth and colour.

At her most arresting pianissimo, Pratt’s silver soprano could be thread through the eye of a needle. Her best is shimmering and spine-tingling.

It is an interesting production choice, when half the repertoire is virtually unknown and your audience overwhelmingly non-Italian speakers, not to use surtitles. Though it’s entertaining to hear Victorian Opera artistic director Richard Mills chat at the podium, giving mini-explanations before each piece, the synopses are so convoluted that you lose some enjoyment trying to keep up.

Obviously we were there for the “beautiful singing”, but for the sake of accessibility, translation of the texts would have been a welcome addition.