The Victorian government will spend $110 million on the long-term recovery of communities hit by the summer's devastating bushfires that burned through over 1.5 million hectares in eastern Victoria, destroying over 450 homes and forcing 60,000 people to evacuate.

Emergency Services Minister Lisa Neville will on Sunday release a state recovery plan for the 2019-20 eastern Victoria fires, which charts investments over the next 12 to 18 months to rebuild communities while creating jobs for local workers. 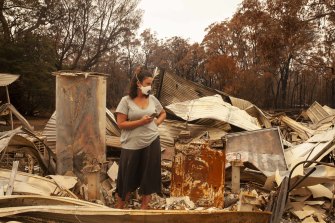 Hundreds of homes were destroyed in eastern Victoria bushfires over the summer.Credit:Rachel Mounsey

The plan, put together by the state's purpose-built Bushfire Recovery Victoria agency, comes after The Age revealed in June that bushfire victims were still living in sheds, caravans and tents on fire-ravaged properties in East Gippsland.

It includes about $78 million for a series of region-wide projects including $8 million for short-term modular homes for displaced families, $10 million to fix crossings and fire-tower infrastructure, and almost $5 million for Aboriginal community organisations, businesses and infrastructure.

"With the clean-up almost complete, the State Recovery Plan now helps bushfire-affected communities turn to the next stage in the journey – getting back on their feet, getting works under way and getting things done," Ms Neville said.

A further $34.3 million will go towards local projects led by councils, community recovery communities, businesses and other community groups. The extra funding takes the Andrews government's bushfire response and recovery funding to about $420 million.

The Black Summer bushfires, the worst in Victoria since Black Saturday in 2009, affected over 120 communities and caused eerie images of orange skies in towns such as Mallacoota. 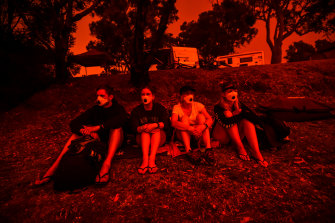 As fires raged in East Gippsland, the sky in Mallacoota turned deep red during the day.Credit:Justin McManus

The government said it has removed almost 2500 destroyed or damaged structures from over 700 properties and is now offering planning advice and support to bushfire-affected families, including the option of modular housing for up to three years as their homes are permanently rebuilt.

In June, however, East Gippsland residents accused construction giant Grocon, the beneficiary of a $75 million state government contract to lead the bushfire clean-up effort across Victoria, of being responsible for lengthy delays in clearing away burned rubble and wreckage that was once their homes.

Families complained of being unable to get their permit approved to start building their new homes until Grocon cleared the land.

Bushfire Recovery Victoria has also encountered issues, with former police commissioner Ken Lay resigning from his role as chairman in July after six months in the job.

Roads Minister Ben Carroll said $8 million would go towards ensuring the safety of thousands of kilometres of freeways, many of which were closed for weeks over the summer and remain lined with burnt-out bushland.

"With the most urgent safety measures already complete, we're now funding the next stage to protect the safety of locals and visitors," he said.