About halfway through Breathe, a new musical created by bestselling novelist Jodi Picoult and veteran playwright Timothy Allen McDonald, a fed-up, locked-down father of three sums up the challenges of the pandemic in a two-word refrain: “It’s brutal!”

Adam, played by Colin Donnell, is lamenting the challenge of shoehorning virtual kindergarten alongside two demanding careers — Donnell’s partner-in-exhaustion is his real-life wife, Patti Murin — but he speaks for all of us who have been crowded and alone, enraged and bereft, at various points in the past year.

Before we get to the logistics of writing, staging and filming a musical in the midst of a pandemic, let’s address the elephant in the Zoom: Why would anyone want to watch a 90-minute theatrical production about COVID-19 — especially one with scenes named after symptoms many of us have experienced firsthand? (They are: Fever, Aches, Swelling & Irritation, Fatigue and Shortness of Breath.) 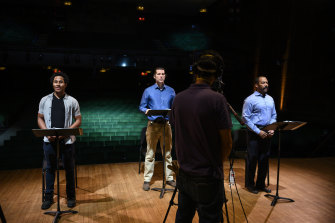 “I know there are going to be people who aren’t ready for this and maybe never will be,” Picoult said in a phone interview from her home in New Hampshire. “That said, I think there are some very funny moments in Breathe. You laugh more than you might expect to.”

The prolific author — who has a novel, Wish You Were Here, out later this year — said she was inspired to create Breathe because she wasn’t ready to tackle COVID-19 between the covers of a book. Fiction writing can be a lonely slog, and Picoult enjoys the spirit of collaboration that comes with writing for the stage, which has long played a role in her life. 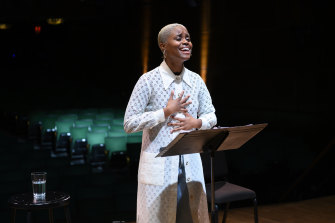 “You don’t want to hear me sing,” she said with a laugh. “But my kids were involved in theatre and I run a teen theatre group in my copious amounts of free time.” (Trumbull Hall Troupe was established in 2004 and donates its net proceeds to local charities.)

Picoult and McDonald have collaborated before, beginning with a stage adaptation of Between the Lines, the young-adult novel she wrote with her daughter, Samantha van Leer. The musical was set to open off-Broadway in April 2020; but, of course, the ghost of Thespis had other plans and the production has been postponed until the 2021-22 season.

Over the weekend of March 7, 2020, Picoult and McDonald — who referred to each other in separate conversations as “the other half of my brain” — attended the wedding of Between the Lines actor Arielle Jacobs in Tulum, Mexico.

“When we came back, everyone at our table got COVID except me,” Picoult recalled.

“I started getting a sore throat and I knew something was wrong,” McDonald said. “The thing I felt first was shame. I was 13 when the AIDS crisis started; I knew I was gay and I remember how people said the epidemic was God’s way of correcting a wrong. When you experience something like that at such a young age, it sticks with you.”

Inspired by Jonathan Larson’s memorialisation of the AIDS epidemic in Rent — and also by the interconnectedness of characters in Love Actually — Picoult and McDonald got to work on a series of stories about the impact of the pandemic on the lives of four pairs of people: strangers who meet at a wedding, a gay couple at a crossroads, the aforementioned overwhelmed parents and a married pair who have stopped communicating.

Then George Floyd was murdered. “Tim and I both felt that the protests that arose were intimately tied to the pandemic, and we knew we weren’t the right ones to write about it since we’re two white writers,” Picoult said. “So we made a call to Douglas Lyons, who is an incredibly talented book writer as well as a lyricist and an actor. We said, ‘This is what we’re doing and we would love for you to be part of our family.’ I think within 10 seconds he said yes.”

With Ethan Pakchar, Lyons wrote Fatigue, about a Black police officer whose son is arrested at a protest and badly mistreated by his father’s colleague. “I didn’t put my own face into the gravel. He did,” says the son, who is played by Daniel Yearwood.

The Breathe team consists of five songwriting teams (one for each vignette), four directors plus supervising director Jeff Calhoun, and a fleet of actors, including Tony Award winners Kelli O’Hara and Brian Stokes Mitchell, as well as Denée Benton, Matt Doyle and Max Clayton, among others. Some of its members have never met in person.

“It felt like every two weeks when we would have a meeting, the Zoom would double exponentially,” Picoult said.

McDonald and Picoult funded the project. “It was a couple of hundred thousand to get it filmed. That was the biggest cost,” Picoult said.

“We do not expect to become stinking rich off this,” she added. “The point was, it’s our job to chronicle stories and this is one that needs telling.”

In March 2021, the cast and crew met in New York at the 92nd Street Y’s Kaufmann Concert Hall to record over a period of three days. There was no audience or set; actors wore lockdown-appropriate clothing (fuzzy slippers, a waffle-weave shirt) and were accompanied by a lone piano. Later, the orchestra would be recorded in separate rooms in Nashville, Tennessee. 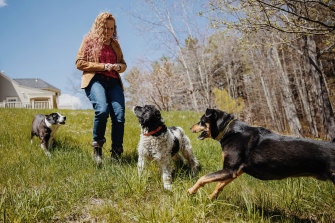 Author Jodi Picoult who has turned the symptoms of COVID-19 into songwriting.Credit:The New York Times

She joined remotely, watching the action from a “very weird camera angle on the side of the stage” and listening through the music director’s feed.

McDonald had the pleasure of greeting participants as they arrived at the Y: “To see them three-dimensionally! To see them wearing pants and shoes! That was just so cool.” The 54-year-old has been involved with dramatic productions since he was 11; the pandemic brought a bittersweet milestone: the longest he’s ever been away from a stage.

“When we walked into this beautiful theatre in the middle of a technical rehearsal, with that buzz and chaos we all love as theatre people, everyone just broke into tears,” said McDonald, who lost his father-in-law to COVID-19 in July. “But we were smiling at the same time, with full body chills. I don’t know what that emotion is, but it was truly a sense of magic.“ 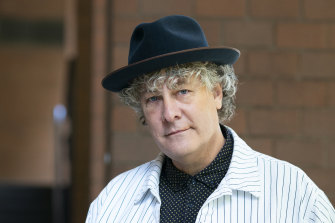 On Friday, Breathe will premiere on Overture+, a streaming service for the performing arts, and the original cast recording will be released by Broadway Records. The show will be available through July 2.

Viewers will see rows of empty green seats behind the actors, whose scripts and music stands lend a behind-the-scenes intimacy. In a peculiar way, those flipped-up seats are more striking than the backdrops and razzle-dazzle you might expect from an in-person production in ordinary time.

So are the typewritten interstitials at the beginning of each chapter, announcing the ever-increasing number of COVID-19 deaths worldwide between March and June 2020. Just as Come From Away captured the sense of global citizenship that flickered briefly after 9/11, Breathe aims to connect the dots between people living in isolation.

“When you go to see a show, you’re sitting in your own individual chair and, whether you’re in the balcony or the front row, you’re feeling a unified emotion,” Picoult said. “To me, that was a metaphor for what was going on during lockdown. We were all in our isolated pods and we were all feeling the same thing. There was something transformative about that that made me think we should try to make sense of this through musical theatre.”