Memo to my fellow Tories: stop all this infighting – or you’ll land us with a grubby alliance that’ll break up the UK, writes former Health Secretary MATT HANCOCK

Those writing off the Conservatives following last week’s by-elections should be careful what they wish for — because they may unwittingly end up cutting off their nose to spite their face.

Less than four days after the disappointing results in Wakefield and Tiverton and Honiton, the Government dusted itself off and comfortably won the Commons support it needs to tackle the problems with the Northern Ireland Protocol.

This vote was a choice between the protocol and helping to protect the Union of Great Britain. 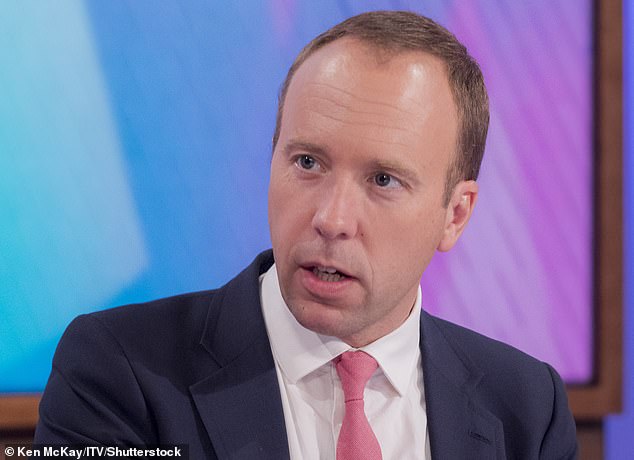 Almost the only viable alternative to a Conservative government is a coalition between Sir Keir and Nicola Sturgeon’s separatist SNP, says Matt Hancock

But the next General Election will effectively be a choice between whether the centuries-old Union continues to exist as the world’s oldest and greatest partnership — or whether it breaks-up and is consigned to history.

That may sound dramatic but, I’m afraid it’s true.

Although the headlines have focused on the Conservatives, what the by-election results really show is that there is no way Labour can win a majority on their own.

Great news you might expect me to shout — except it’s not, because the realities of this are chilling.

Let me explain. Almost the only viable alternative to a Conservative government is a coalition between Sir Keir and Nicola Sturgeon’s separatist SNP. Her prize for cosying up with Labour will, of course, be another independence referendum for Scotland.

Yesterday, Sturgeon declared she plans unilaterally to hold a referendum in October next year. But while there’s no legal basis for another divisive vote, it would be a very different story with a Labour-SNP coalition. It is a huge risk, and would quite simply place our whole country in peril.

The threat to the prosperity and connections we’ve built together, and the prospect of yet more instability and of border checks — with the risk to security they would pose — don’t bear thinking about. 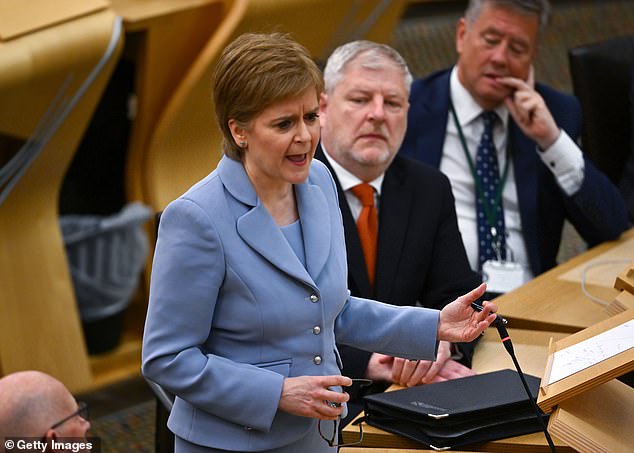 In a statement to Holyrood, Nicola Sturgeon laid out her hopes to stage another independence referendum in October next year

The only other alternative is worse: a coalition between Starmer, Sturgeon and Ed Davey’s Liberal Democrats who want to bring in Proportional Representation.

Inevitably, the price would be another referendum on the voting system, and probably votes for 16-year-olds to boot.

The point is that we cannot risk tearing our country apart with yet more divisive votes on matters settled just a few years ago — including Brexit.

That may sound far-fetched, but I wouldn’t put anything past the Lib Dems when it comes to trying to overturn the democratic referendum on our EU membership.

These are my biggest fears. Which is why I believe it’s our job, as Conservatives, to now roll up our sleeves and stop the self-indulgence and bickering.

There’s an ongoing debate about whether the by-election results are down to mid-term blues. I remember when we lost the Corby by-election in 2012 — by a bigger margin than we lost Wakefield last week.

Back then we had UKIP snapping at our heels, whereas now that Brexit is effectively done there is no Right-wing party to speak of. Instead, we find ourselves the governing party less than half that far behind, even after all that’s happened — and despite the fact we are in the midst of a cost-of-living crunch more difficult than any time in a generation.

Perhaps most glaring of all is that there’s absolutely no enthusiasm for the deeply dull Keir Starmer. He simply hasn’t got the country going and they don’t think he’s up to the job. 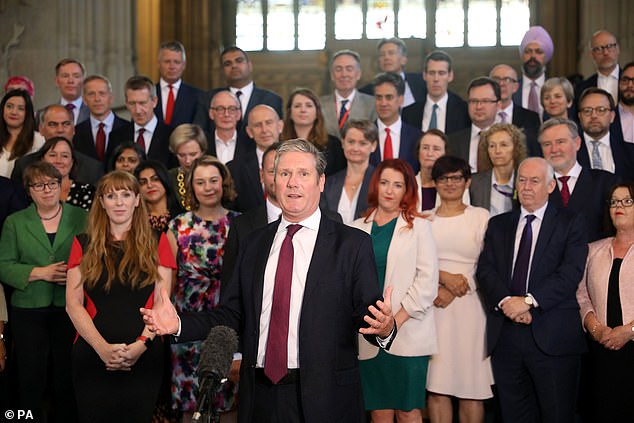 While, certainly, there are swathes of Britain who are angry — and showed that last week — these by-election results demonstrate Labour can’t win outright.

There’s obviously an unofficial electoral pact already in place, with the Liberals hardly putting up a fight in Wakefield, and even local Labour MPs apparently telling people to vote Liberal in Tiverton.

But it’s much harder to pull that trick off in the heat of a national campaign.

So, how do we turn this around? First and foremost, we’ve got to deliver on the things that people care about.

Top of the list is the economy — which we need to have recovering from the huge hits of pandemic and war. Despite the challenges, there are still strengths, such as record levels of employment, and with discipline it can be turned around.

It’s not an easy task, but far more likely to be successful under Boris and Rishi Sunak than any alternatives. Then, we’ve got to get ourselves in a position to be able to put a really strong positive offer to the country in two-years’ time.

Partygate has been a huge hit to the Prime Minister’s reputation, but let’s not forget he got Brexit done, the UK was the first major country out of the pandemic with a world-first vaccine rollout and, more recently, he’s led the Western world in his support of Ukraine — standing shoulder to shoulder with President Zelensky.

Again, just this weekend the Prime Minster corralled and chivvied the G7 to support a very strong stance against Putin’s aggression. 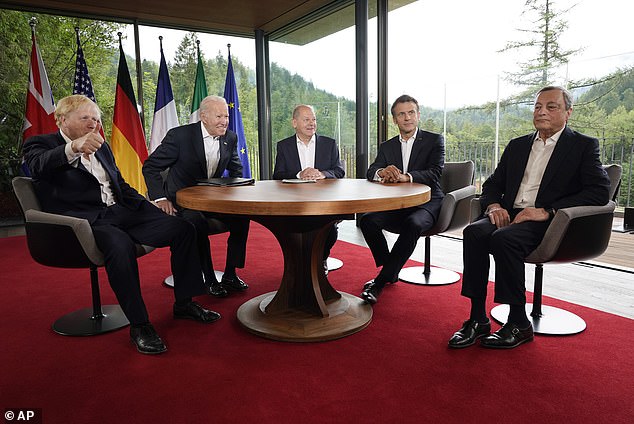 The G7 summit in Germany wrapped up on Tuesday with leaders pledging to fight back against Vladimir Putin ‘s war on food with $5 billion to help protect supplies, according to a senior U.S. official. From left to right British Prime Minister Boris Johnson, U.S. President Joe Biden, German Chancellor Olaf Scholz, French President Emmanuel Macron and Italy’s Prime Minister Mario Draghi meet on the sidelines of the summit

Yet General Elections are about the future not the past. It will be about what the Conservatives are offering people for the second half of this decade, not about past actions, glorious or otherwise. The questions will be: Who do you want as Prime Minister? And do you want the United Kingdom to be put at risk?

This is why I care so much that we sort things out now. We must not get distracted further with infighting and Westminster shenanigans. We need to deliver for the people so we’re in a position to protect the country from that grave threat to its very existence.

People can see that the cost-of-living crunch is caused by international factors — China’s refusal to live with Covid, and Russia’s atrocious war on Ukraine. They don’t blame the Government — but they’re looking for solutions.

So, the response to give one-off support that helps us through it yet doesn’t add to long-term inflationary pressures was a smart one.

People want better jobs for the future, and with the raft of pro-innovation legislation going through Parliament, we’re taking advantage of our new Brexit freedoms — much as we did when we delivered the first vaccine rollout in the world.

In the past month, we have legislated for more modern agriculture and the better use of genetics, not to mention freedom of speech in universities, protections for Northern Ireland veterans and improving data laws.

And in a boost for ‘new nuclear’, Rolls-Royce announced its new HQ in Manchester this week, creating 850 jobs and backing clean, affordable, home-grown energy. From renewables to the space sector to fintech to tackling climate change with new technology, the UK has the potential to lead, and the Government is taking action.

Our education system needs rigour and a focus on ensuring every child learns properly to read — a subject close to my heart as a dyslexic — and Education Secretary Nadhim Zahawi is making great strides. Then, of course, there’s levelling up, which Michael Gove is delivering with aplomb.

Do all this and we can help people from all backgrounds fulfil their potential. And, given all the noise and distractions, there is surprising unity on Conservative benches about this policy programme.

We need to spend the next two years delivering these values on the ground. That way, not only can we be in a position to vanquish the risk of a grubby coalition deal that sells the Union down the river. But more importantly, we can prepare our country for the opportunities the 21st century has to offer.