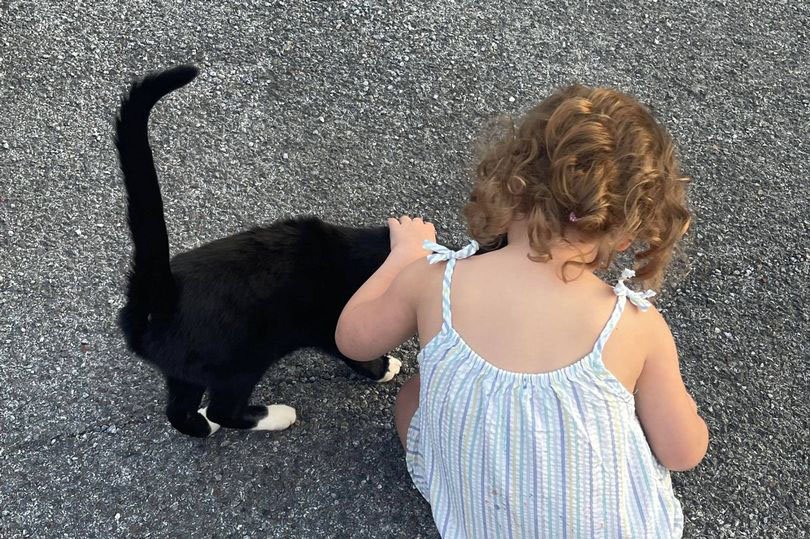 This is Theodora-Pearl Aston, a three-year-old whose cat pal helps her keep her stress-induced seizures at bay.

Theodora-Pearl has a heart condition called reflex anoxic syncope seizures (RASS), which can result in seizures when a person is in pain, fear or anxiety.

Her mum Taya describes the neighbourhood black cat as a ‘blessing’, as her daughter’s bond with the moggie has helped keep her stress levels down in the two years they’ve been friends.

Taya used to find getting Theodora-Pearl in and out of the car a battle as it has brought on seizures in the past due to the stress.

Taya told PlymouthLive: ‘They were kittens when we moved in three years ago, so she has been building a friendship with him for over two years.

‘She has a condition called RASS which stops her heart from working. Getting her in the car can be quite stressful and if she is overly excited, or stressed, she ends up having a seizure.

‘So having a cat gives her something to look forward to and makes things a lot easier.

‘It’s trying to get her back in now to the house, especially if it’s a nice day, she’ll be out there for ages.

‘Something so simple can help her stop having seizures because of the fact she’s not getting stressed but excited to get in the car so she can go say hello to her friend.

‘It’s nice for her to have after a long day. Having the cat is really positive for her.’

Theodora-Pearl refers to the cat at her ‘mate’, since neither she nor her mum knows the cat’s real name.

Taya said: ‘I have spoken to the owner a couple of times, but I hope she saw it when I shared it on Facebook. We don’t even know the cat’s real name, we just call him “her mate.”

‘She will say “My mate’s here” and gets all excited.

‘They have another cat which is a girl, so she will ask him how his sister is, if he ate all his vegetables to get big and strong, and whether the cat’s had a good day. She’ll also tell him to go inside for dinner when it’s getting cold.

‘Of course, there are lots of tickles and cuddles. The cat is very friendly and it’s nice to see them grow up together – especially with a stranger’s cat.

‘We obviously don’t feed him, but for her, it’s really nice, and it all started from a hello, and now they have this bond.’

Taya decided to share a post online detailing her daughter’s special bond with her mate because she wanted to spread some good news with the world.

Taya added: ‘There’s so much negativity in the world and thought I would share a post because I really do appreciate it. It keeps us from having to visit Derriford Hospital at this time and getting in the car is a breeze now.

‘It’s also nice if she’s had a bad day to see her friend at the end of it. It’s so nice that something so simple can have such an impact on our lives. It has massively impacted us in such a positive way.’