No sods will be turned by the end of 2022 for nearly a third of the park-and-ride projects the federal government promised at the 2019 election, based on its own projections.

The controversial $660 million commuter car parks program has been blasted by the Auditor-General for funnelling money into Coalition-held or targeted seats in the lead-up to the election it was widely tipped to lose. 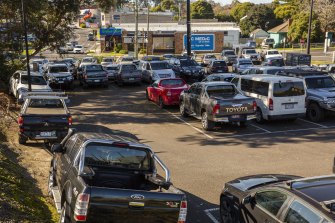 Ringwood railway station car park in suburban Melbourne – one of the projects promised funding in 2019 – is still to be upgraded.Credit:Paul Jeffers

The Auditor-General said a “top 20 marginals” list, maintained in the office of then-urban infrastructure minister Alan Tudge and shared with Prime Minister Scott Morrison’s staff, was used to guide decisions about where projects should be funded. There was no open call for projects or competitive, criteria-based selection process.

So far, of the 47 projects chosen in 2019, three are complete, four are under construction and six have been cancelled.

The federal government anticipated that by the end of 2022, nearly four years after they were announced, 33 of the projects would have either been completed or be under construction, a spokeswoman for current Urban Infrastructure Minister Paul Fletcher said.

That leaves 30 per cent of the 47 projects announced unstarted. The next election is due to be held by May 2022.

In NSW, construction has begun on one of 11 projects, at Revesby station in south-west Sydney, while the state government expects to begin building another, at Riverwood south of the CBD, by the end of the year. Planning for a carpark at Penrith station in Greater Western Sydney was well advanced, but the start date for construction was delayed earlier in the year after Indigenous artefacts were discovered on the site.

In Queensland, building has started on one of the four projects, in the outer north-western Brisbane suburb of Ferny Grove, and the state government says construction should begin at Coomera on the Gold Coast in November. The other two sites are still having businesses cases done.

The sole project in Western Australia, at Mandurah south of Perth, has been built.

Victoria attracted two-thirds of the projects, with car parks announced for 30 stations mostly in south-east Melbourne. These include the six projects now cancelled and three of the finished sites. For several of the other projects, local councils are still consulting their community about their merit or have yet to choose sites.

Mr Fletcher has delayed a second attempt by the Senate to have a copy of the marginal seats list released publicly.

“The government requires more time to consider its response to the order and intends to table such a response as soon as practicable,” he wrote to Greens senator Janet Rice, who won a Senate vote to ask for the documents. After Thursday, the Senate won’t sit again until mid-October.

In response to an earlier attempt by a Senate committee to uncover the marginal seats list, Mr Fletcher claimed they were cabinet-in-confidence and therefore couldn’t be made public before 2039.

Mr Tudge has previously said he was “not aware” of the list. He joined cabinet after the 2019 election, still in the urban infrastructure portfolio.

Senator Rice said the “delay tactics” were clearly an attempt to avoid transparency.

“If the government did nothing wrong, why keep these documents secret?” she said.