The Sunday Age and The Sun-Herald can reveal that, along with a Big Gig reunion, original SeaChange actors Sigrid Thornton and David Wenham will reminisce about the steamy, sometimes infuriating romance between Pearl Bay magistrate Laura Gibson and cafe owner Diver Dan, which ended in 2000 with the third and final season of the ABC series. Wenham did not return for Nine’s 2019 reboot*. 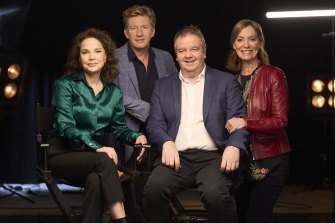 “We’re very relaxed in one another’s company,” says Thornton. “David would say that translated to the screen. That’s what happened when we sat together again. We just shot the breeze. They’re happy memories. We had this lovely ride in a beautiful environment sharing time with people that we enjoyed and doing creative work. There was something alchemic about the way it struck us all at the right time in our lives and the extraordinary material that (series creators) Andrew Knight and Deb Cox presented us with. We all jumped into the sandpit with glee every day. It was a joy.”

Kevin Harrington, whose role on the 1998 series, that of caravan park owner and inept handyman, Kevin Findlay, helped him break into television from live theatre, has fond recollections of his time filming on Victoria’s Bellarine Peninsula. In ABC 90 Celebrate!, he is reunited with Kerry Armstrong, who played uptight mayor’s wife, Heather Jelly.

“I hadn’t been a regular cast member on television before,” says Harrington, who later appeared in 2000 film The Dish and Neighbours. “We could tell it was fantastic in terms of the colourful nature of the characters around the edges of the drama. I hadn’t seen that (on Australian television) before.”

He remembers a “collegiate” atmosphere at the national broadcaster. 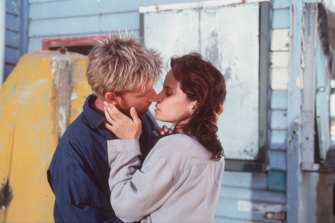 “There was more work going on simultaneously (at ABC) than there was at the other channels. A bunch of people were on the payroll permanently, so they knew each other so well and there was a great sense of camaraderie among them, cast and crew. They went from project to project and they had a nice sense of friendliness and sensitivity. I remember working at another network and it was very blokey and cynical, whereas the ABC was kinder and gentler to the actors.”

SeaChange was an opportunity for Thornton to spread her wings beyond the “corsets and crinolines” of The Man from Snowy River and All the Rivers Run. It was also one of the first examples of comedy-drama on Australian television; the role of Laura Gibson – a divorcee in the grips of a mid-life crisis – was an unusual female lead. 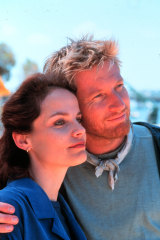 “The character’s neuroses and frailties were something that we hadn’t quite seen in a centralist figure, and I think people responded to the authenticity of that circumstance – someone who wasn’t able to juggle all the balls at once,” Thorton says.

“A woman who was trying to have it all but really couldn’t manage that, but sort of could. And someone who kept on trying – who had the best intentions but stuffed up an awful lot of the time. That’s something that we’re all doing on most days of the week, isn’t it?”

While some of the themes (and certainly the fashions) may have dated, the titular premise is as relevant as ever.

“It tapped in to something that was going on at the time,” Thornton says.

Thornton has “great optimism” for the ABC’s next 90 years of drama.

“Practically every Australian has a connection with the ABC and often a very personal one. From the point of view of a performer, and as someone who values the creative arts as part of our cultural life, the ABC’s always been a standard bearer for high quality creative work.

“I’d love to see more of it and I look forward to that happening in the future.”

* Nine is the owner of this masthead.