The Wait Is Over! Meet Stacey Abrams, Your New Favorite Author

After years as a secret romance novelist, the celebrated politico retires her pen name for her new novel 'While Justice Sleeps'

If there’s one thing Stacey Abrams needs more credit for is having patience. She and her dedicated voting activists flipped Georgia blue after 28 years. She served as a GA state legislator for 10 years after a short career as a tax attorney. And in 2018, she became the first Black woman to be nominated by a major party for governor in U.S. history.

But 10 years ago, while serving in the Georgia House of Representatives, Abrams was seeking a publisher for her intricate political thriller where Avery Keene, a whip smart Spelman lawyer (sound familiar?), goes up against the Supreme Court. Still, Abrams said during a morning Zoom call, “Nobody cared.”

Undeterred, Abrams saved her nearly 400-page tome and went back to her day job as a state legislator. She didn’t stop writing either. The Spelman and Yale grad had been balancing both worlds since 2001, when she started publishing a series of romance novels using the pseudonym, Selena Montgomery. However, Abrams wanted this book under her name. Her time would come in 2019. “Someone finally decided, ‘Oh, it sounds like a good idea,’” she said, with a hint of well-deserved sarcasm.

On May 11, While Justice Sleeps, arrives on bookshelves and Abrams is ready to celebrate, but “more than anything,” she says. “I’m just going to be so relieved that Avery and friends are out in the world 10 years later, but at last.”

Abrams speaks with ESSENCE about the parallels between fiction and political writing, the Black actress she envisioned as her lead character and the next item on her to-do list. But first, introducing Stacey Abrams, your next favorite author.

While Justice Sleeps is the first book I’ve read by you. In my opinion, you write like it’s your passion, like it’s your first job. Who came first: the person who loves government and legislation or the writer?

STACEY ABRAMS: The writing. I’ve been writing for as long as I can remember. I learned to read when I was very young, I learned to write soon thereafter and I love telling stories. For me, it’s one more tool for my politics, for my interest in government. I don’t see them as separate. I see writing as sort of an integral part of who I am. The question is, what am I applying it to?

Do you consider yourself a writer or an author?

ABRAMS: Author means somebody paid you for it, so I’ve always been a writer. I’ve been an author since 2000, at least in fiction, and nonfiction a little bit sooner than that. But, yeah.

They’re re-releasing your first three novels under your pen name Selena Montgomery. I’m curious, when you read books, are you a one-and-done type of reader or do you revisit them?

ABRAMS: Oh, no. I love [re-reading books]… To me, it’s like watching a good film again or watching TV again. A really good book that isn’t so soul-crushing that you can’t come back to it… There’s some books I’m like, “I can’t do that again because I need to be able to engage with humanity and breath.” But, there’s some that are just so much fun or it’s just there are layers that you go back to get again, and there are writers who just love words and their way of creating stories and creating spaces are just so compelling you’ve got to come back and visit it again, because it’s just a lovely place to rest.

Let’s get into your lead character Avery Keene. How much of Stacey Abrams is Avery?

ABRAMS: I think all of my characters have some aspect of me or someone I’ve met, but I would say Avery is reminiscent of me. She’s a lawyer, although I was never a clerk. She is someone who tries to use the tools at her disposal to solve problems. I love the fact that she has a little bit of a sense of humor. It’s a little sardonic. I hope that my lived experiences, she makes the choice to do good. She doesn’t have to, she could decide not to. I really wanted to write a character, a hero in the story who chose to do the right thing not because she had no choice, but because she decided this was the right thing to do. Part of my intentionality in my life is to choose to do the things I think should be done.

I love that she went to Spelman…

On the New York Times podcast Sway, you said your romance novels tend to have a lot of political thriller elements to them. What was the idea behind Avery going up against the Supreme Court?

ABRAMS: All of my novels have some element of suspense. That’s the through line. I haven’t really focused on government as the seat of the story before this novel. This actually came out of a conversation I had with Teresa Wynn Roseborough and her name shows up twice in the book. She’s Chief Justice Teresa Roseborough and she’s Howard Wynn. At least, her maiden name was Wynn so I gave her both because this idea was wholly created by her question to me. We were having lunch a few years after I left the law firm, and she said, “So, have you thought about the fact that the federal judges have lifetime appointments and that while the constitution allows for, you can vote someone out of office in Congress and the 25th amendment takes care of presidents who weren’t quite up to the job, there is no provision for the only parts of our government that have lifetime appointments. Other than high crimes and misdemeanors or death, there’s no way to get rid of them if they’re completely incapacitated.”

I thought, “Well, dude, that is not something that had occurred to me before. I’m driving home and I  cannot let go of the idea. The very first scene with Howard Wynn, I wrote it that night because it was just so fascinating to me. I think I’d either read about someone in a persistent vegetative state or something, but I was like, “Oh my God, what if the Supreme Court Justice falls into a coma and the only person who can figure out what’s going on is the person who has the least amount of power in the entire infrastructure?” And, that would be a clerk. 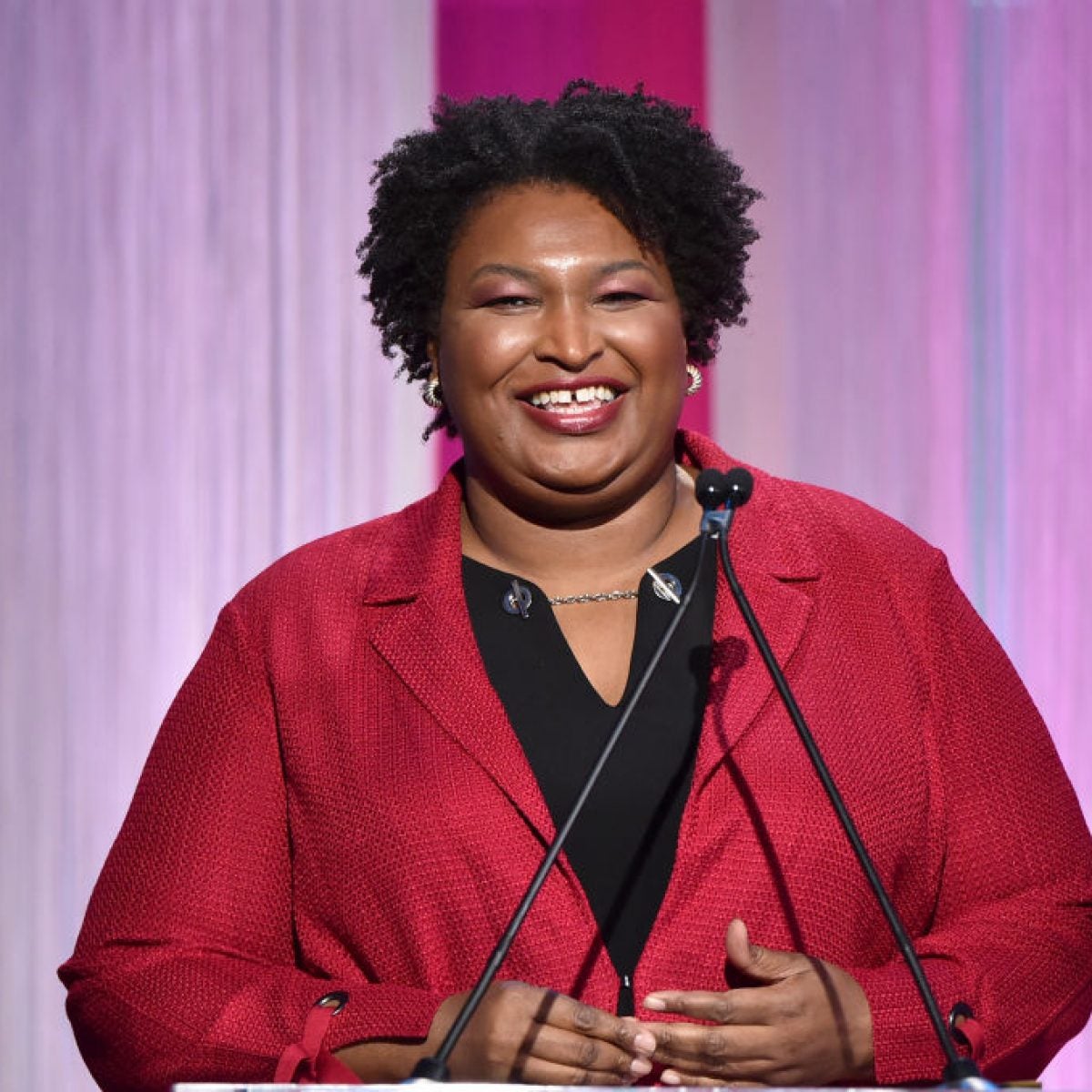 By reading it though, I was like, “This is such a movie.” Who do you see playing Avery? Also, who’s playing Jared?

ABRAMS: So, I don’t know. I will tell you when I was first writing the book 10 years ago…

Were you trying to sell it as Selena, or…?

So, who were you thinking could play Avery 10 years ago?

ABRAMS: I’d always thought of Sanaa Lathan. I love her characterization. When she does sarcasm, it is just spot on. Jared, I’d never settled on because I think he’s handsome.

The minute he walked in the cafe, I was like, “He’s fine.”

ABRAMS: Yeah, exactly. Exactly. Because I’d written romance for so long, I wanted to make sure there was a spark, but that this didn’t consume the story because they both have sort of higher issues to deal with.

ABRAMS: I plan to run for office again, but I am focused right now on making sure we have elections that are free and fair in Georgia, which is something I’ve  been working on for awhile. That we have a response to COVID that actually helps lift communities out of poverty and fix the broken infrastructure, and that we get vaccine distribution to the communities, especially rural communities of color that are being treated as though they are hesitant and the real issue is that they don’t have access. These are communities that don’t have a phone to do the QR code, and they can’t spend hours on the internet trying to figure out where to go and they don’t have transportation. So, one of the big missions that we have through the organizations I lead, Fair Count and Southern Economic Advancement Project (SEAP), is to ensure that we are getting the vaccine to the people who want it, but otherwise can’t get access.

While Justice Sleeps by Stacey Abrams (Doubleday) is available on May 11.