The UK is being strangled… as rivals steal our business

Global Britain is one of the three pillars of this government’s post-Brexit vision for this country. The idea that Britain, freed of the shackles of the EU, will stride the world as a great trading nation – a bridge between East and West – is truly inspiring.

After all, we have so many natural advantages in our language, our location (within a direct flight of 96 per cent of the global GDP), our legal system and – most of all – in the ingenuity and entrepreneurialism of our people.

A small island doesn’t become the fifth-largest economy in the world, or support 33million jobs without being brilliant at international trade.

As chief executive of Heathrow Airport, I see this every day, as 40 per cent of the UK’s physical exports travel through the airport in the bellyhold of passenger planes.

The same planes that carry fresh salmon from a Scottish farm to the sushi markets of Tokyo within 24 hours also carry language students, tourists and the motor company executives who have invested billions in this country. 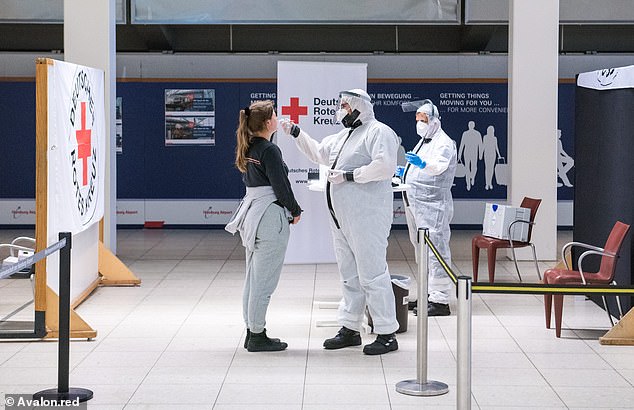 Hamburg, Germany: A traveller has a Covid-19 test performed at the airport by an employee of the German Red Cross (DRK). The introduction of compulsory tests for returnees from hight risk areas went without a hitch at Hamburg Airport in early August, according to authorities 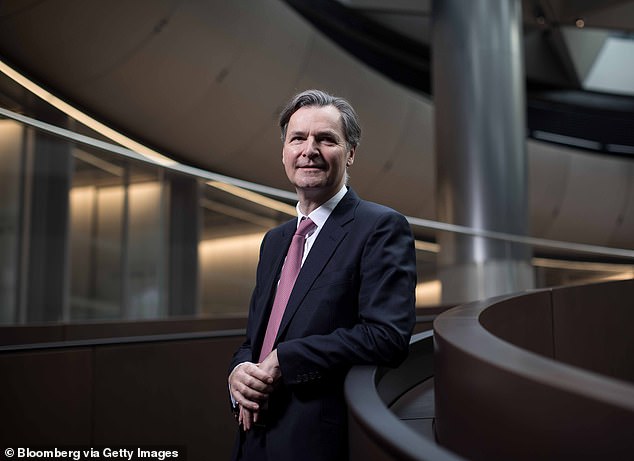 John Holland-Kaye, Chief Executive of Heathrow Airport (pictured): ‘The problem with a blanket quarantine is that it assumes that everyone is carrying Covid-19 – which is just not true. Over 99 per cent of the world’s population has never even had the disease.’

Those plane seats are also packed with engineers, lawyers and accountants that make Britain one of the world’s great service exporters. It is these exports of goods and services that will be the foundation of Global Britain. And they all travel by air.

Heathrow’s position as the best-connected airport in the world is a huge competitive advantage for this country. No one else can beat a service to New York every 30 minutes, direct flights to over 30 cities in the US, or 12 to China.

Except that those flights and the millions of jobs that rely on them are grounded. Over 860,000 passengers travelled through Heathrow in July – down 88 per cent on the previous year.

Naturally, we all understand that when you are in the middle of a pandemic you need to be very cautious about importing disease from overseas. That is why we supported the blanket quarantine during lockdown, where passengers had to self-isolate for 14 days upon arrival into Britain.

And we supported the Government’s pragmatic approach to reopening borders by later allowing free travel from ‘low-risk’ countries. Most of these were short-haul European markets, which opened just in time for the summer holidays. But our long-haul markets, such as the United States, which are so critical for the success of Global Britain, remain closed.

The problem with a blanket quarantine is that it assumes that everyone is carrying Covid-19 – which is just not true. Over 99 per cent of the world’s population has never even had the disease.

A much better alternative is to test people to make sure that only people without coronavirus are allowed in. At Heathrow, we have already set up a testing facility to administer Public Health England’s preferred PCR (polymerise chain reaction) swab tests for arriving passengers.

They are currently sitting idle, as the Government has not given permission for passengers to exit quarantine early if they can prove they don’t have the coronavirus.

I have even been part of a trial of a 20-second Covid-19 test developed by a British company, which is quicker, cheaper and more accurate than the PCR test. 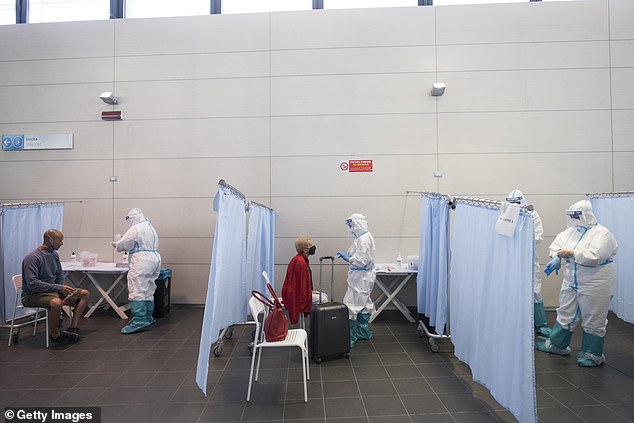 Turin, Italy: Medical staff in full PPE conduct a swab test on travellers after their flight from Ibiza, Spain to Turin on August 26, 2020

Germany, France and around 30 other countries are moving to testing as an alternative to quarantine. This is starting to get their economies moving again and, in fact, both Frankfurt and Charles de Gaulle airports carried more passengers over the last few months than Heathrow. The first time that has ever happened.

And this is what will happen if the Government doesn’t get a grip and reopen our borders safely.

Britain will fall behind. Think about that. If EU airports thrive, while the UK’s hub declines, then Brexit Britain will rely on European hubs to get their global goods to market. And when France chooses to close routes to the UK, what do we do then? Britain will become a vassal state of the EU, just after we have left.

British businesses that rely on trading around the world are already being strangled while our rivals in France and Germany power ahead. I have already had to cut 1,200 jobs and have just started consulting on further cuts. I want to fight for every job – and it makes me angry to see the Government doing nothing to protect jobs when the solution is so obvious. 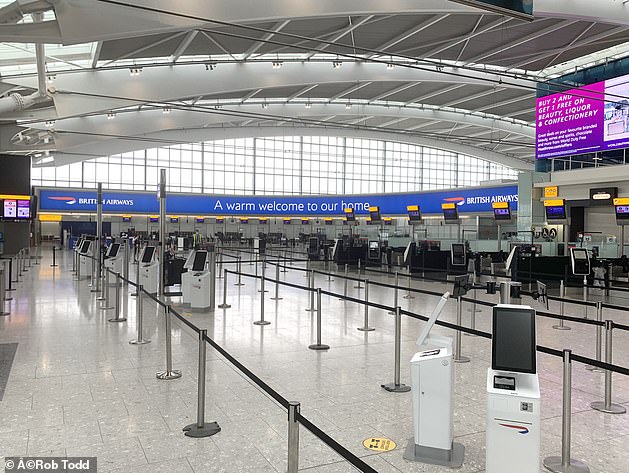 Pictured: Terminal 5 at Heathrow was devoid of tourists as business chiefs call for Britain to get flying again. Heathrow would normally handle around 1,300 flights every day in September, with 220,000 passengers coming and going. Yesterday there were just 504 flights landing and taking off, with many planes far from full

What makes me more angry is that we are putting this country’s future at risk.

We weren’t born as one of the world’s great trading nations. We got there through hard work and ingenuity over decades of patiently building up international markets. And all that work will be lost if we stand by and do nothing.

Once customers have switched to trading with other countries, it will be twice as hard to get them back. And we shouldn’t be waiting to start testing until every other country has done it. Global Britain should be taking a lead.

Back in May, I called on the Government to develop a common international standard for aviation testing, so that passengers could be tested for Covid-19 in their home country before they fly – and quarantine there if need be. We don’t need to negotiate this with every country, just doing it with the US and the EU would bring most other countries with us.

With our economic and diplomatic skills, this is where Britain can act as a bridge between East and West. We could start with a pilot of testing at both ends of the LHR-JFK route – the most valuable aviation route in the world.

I love the vision of Global Britain. But it has to be backed up with action. Let’s start by testing on arrival to reopen our borders. Let’s help get businesses back to work. And let’s do it today.