History tells us any socially progressive idea that at first seems unthinkable has a good chance of becoming an orthodoxy. Look, for instance, at feminism, which no longer attracts the overtly misogynist comments directed at ‘women’s libbers’ in the 1970s. There may be plenty of battles still to be won but few males today would dare flaunt their chauvinist attitudes in public. The message is even starting to be heard in one of the last bastions of old-fashioned sexism, Parliament House, Canberra.

Meanwhile public art institutions have quickly succumbed to a viral spread of adulation for female artists. Over 2020-21 the National Gallery of Australia has devoted a large slice of exhibition space to a two-part survey of work by Australian women artists called Know My Name. The Art Gallery of New South Wales was quick to announce that half the artists in this year’s Archibald Prize were female. And so on. 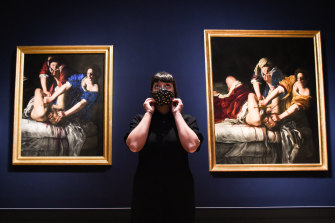 A usurper of male power: Two violent paintings by Artemisia Gentileschi of Judith beheading Holofernes, about 1613-14, at National Gallery in London.Credit:Eamon M. McCormack/Getty

The only thing preventing museums from aiming for gender parity in all their projects is a historical scarcity of female artists. So while it may be possible to produce contemporary shows in which women are better represented than men, it’s a different story when we venture back into the past. The reasons have been discussed many times, notably by Linda Nochlin in her celebrated essay, Why Have There Been No Great Women Artists? (1971), but it always comes down to lack of opportunity brought about by social and cultural factors.

The conclusion Germaine Greer reached in her 1979 book, The Obstacle Race, was: “you cannot make great artists out of egos that have been damaged, with wills that are defective, with libidos that have been driven out of reach and energy diverted into neurotic channels”.

It could be argued that Greer’s bleak assessment is a rhetorical flourish rather than a sober piece of art history, but for one artist she reserved the words: “great genius”. Artemisia Gentileschi (1593-1654) is Greer’s “magnificent exception”, a painter of undeniable talent who attained a high level of recognition during a career spent in Rome, Florence, Venice, Naples and London. 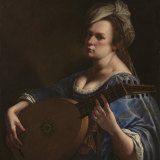 Artemisia Gentileschi, Self Portrait as a Lute Player, about 1615-18Credit:Wadsworth Atheneum Museum of Art

The full-scale rediscovery of the artist began with Mary D. Garrard’s monograph of 1989, Artemisia Gentileschi: The Image of the Female Hero in Italian Baroque Art. In the three decades that have followed, Artemisia’s reputation has continued to grow. In a new book, Artemisia Gentileschi and Feminism in Early Modern Europe, Garrard says it’s perfectly legitimate to refer to the artist by her first name, partly to distinguish her from her artist father, Orazio Gentileschi, and partly because we have no qualms in speaking familiarly of Leonardo, Michelangelo, Raphael or Titian.

Had it been possible to leave Fortress Australia last year the show I would have most liked to have seen was Artemisia, at the National Gallery in London (3 October 2020 to 24 January 2021). Although it was messed around by lockdowns, this was the first-ever survey of Artemisia’s work in Britain, where she lived from 1638-40, working for Queen Henrietta Maria, the spouse of the ill-fated Charles I – by far the greatest art collector of all English monarchs.

The exhibition received such rave reviews I instinctively felt sceptical. Newspaper criticism in Britain is an unreliable affair in which reviewers habitually exaggerate their responses in order to stand out from the crowd. Good shows become outstanding while poor ones are declared disastrous. More nuanced discussions are surprisingly hard to find.

The exhibition received such rave reviews I instinctively felt sceptical. Newspaper criticism in Britain is an unreliable affair.

The National Gallery brought together 30 of Artemisia’s most important works, along with paintings by her father and other artists. It presented a perfect opportunity to cut through the forest of hype that has grown up around the painter and see how good she really was. Many of Artemisia’s admirers will admit of no doubt as to her talents. She is a feminist icon, the necessary female counterweight to all those dead white males who dominated the art of the Renaissance and Baroque periods. 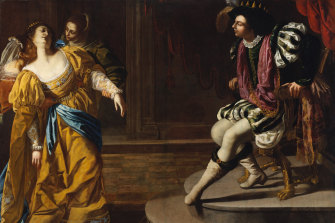 The story art lovers know about Artemisia is that she was raped, at the age of 17, by another artist, 33-year-old Agostino Tassi, who was working with her father in Rome. Orazio took Tassi to court for the assault and also for the theft of some paintings – an offence Garrard says was “apparently equally serious to him”. Artemisia had to repeat her accusations while her hands were tortured with strings and endure the slanders of Tassi’s friends. Although he was convicted, Tassi never served his sentence of exile and Artemisia was forever stained as a “fallen woman”. 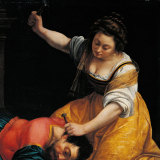 Jael and Sisera by Artemisia Gentileschi from the Museum of Fine Arts, Budapest.Credit: Mondadori Portfolio/getty

Quickly married off to a mediocre painter named Stiattesi, she relocated to Florence in 1613, where her work began to attract attention. Her relationship with Orazio was permanently damaged by the trial and presumably by the marriage of convenience he arranged. In Florence Artemisia brought more opprobrium upon herself by conducting an affair with a nobleman while her husband began to disappear into the background.

Although barely more than 20 years old, Artemisia already had quite a life: raped, tortured, wedded, a mother and an adulteress. In contemporary eyes, she might be seen as both victim and “bad girl”. But like all artists she must ultimately be judged on the basis of her work, and that’s where things get complicated. 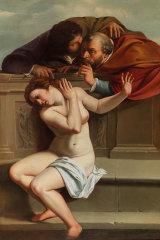 Susanna and the Elders by Artemisia GentileschiCredit:Heritage Images/Getty

Her first acknowledged major piece is a version of Susannah and the elders (1610). It’s assumed the picture pre-dates her assault and may have had some assistance from Orazio, but it is still an impressive feat, not only for its technical finesse but for the way she captures Susannah’s fear and revulsion when confronted by two lecherous men who threaten to tell deadly lies about her unless she submits to their desires.

For male painters this story was often little more than an excuse to show a slyly eroticised image of a naked woman gazing with bovine incomprehension at two aged Peeping Toms. In Artemisia’s version, Susannah knows exactly what is happening, she twists her body and grimaces in disgust. It’s pure sexual harassment.

In Artemisia’s version, Susannah knows exactly what is happening, she twists her body and grimaces in disgust. It’s pure sexual harrassment. 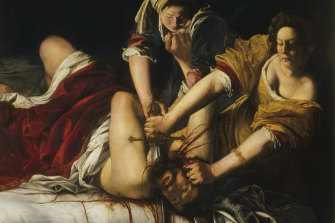 In the biblical story Judith took it upon herself to seduce and assassinate the Assyrian general when her male comrades were hesitant to act. It is the archetypal story of a woman who takes matters into her own hands, showing the men how it should be done, but her deed is also an act of symbolic castration. It made Judith seem bold and dangerous, an usurper of male power. 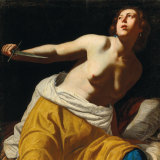 Lucretia, circa (1640-164) by Artemisia GentileschiCredit:Heritage/Getty

The temptation for anyone familiar with the events of Artemisia’s life is to read her work, with its cast of strong female characters, as a powerful feminist narrative. The danger with this (almost irresistible) interpretation is that one is judging a woman of the 17th century through the lens of a modern school of thought. Did Artemisia ever think of herself as a “feminist”?

In her new book Mary D. Garrard has addressed this question directly. She argues that feminism, like science, should be seen as “a continuum that has evolved over time, from the fourteenth century to the present”.

To back up her argument she draws on an extensive body of research into female writers and thinkers of the Renaissance and Baroque. This includes not only Christine de Pizan, who wrote the Book of the City of Ladies (1405), but figures such as Moderata Fonte, Arcangela Tarabotti, Lucrezia Marinella and Veronica Franco, who wrote extensively in defence and praise of women, taking on the misogynists of their day. The writings of all these women have now been translated and published in English, making them available to a wider audience. 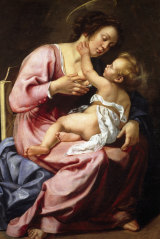 The effect is to build an intellectual framework for Artemisia’s actual beliefs as opposed to all the instinctive, intuitive associations that spring so readily to mind. While it would be strange if educated women of any era didn’t resent a system that treated them as second-class citizens, it’s surprising to learn how forcefully the feminist viewpoint was asserted in 17th century Italy and other countries. Royal patrons such as Marie de Medici, as Queen of France, commissioned sequences of paintings that celebrated famous women – a practice continued by her daughter, Henrietta Maria, when she became Queen of England.

Artemisia was acquainted with some of the female writers and almost certainly aware of their work. She received commissions from both queens. By the end of this book it seems entirely plausible to view Artemisia as a feminist with very distinct views, not just in regards to her own superior abilities but on the way women are regarded in a male-dominated society. The book throws a ray of light into the clouds of myth that have grown up around the artist. The only thing missing is a chance to view her paintings. Artemisia’s feminism can be argued persuasively in print, but artistic genius is a quality that needs to be verified at first hand.

THE BOOKLIST
The Booklist is a weekly newsletter for book lovers from books editor Jason Steger. Get it delivered every Friday.