The moment that killed her career? Sinead O’Connor remembers it differently

Sinead O’Connor is alone, which is how she prefers to be. She has been riding out the pandemic in a tiny village on an Irish mountaintop, watching murder shows, buying fairy-garden trinkets online and mainlining American news on CNN. On a recent overcast afternoon, she had a navy hijab arranged over her shaved head and a cigarette permanently installed between her fingertips, and when she leaned over an iPad inside her all-glass conservatory, she looked as if she had been hermetically sealed into her own little world. 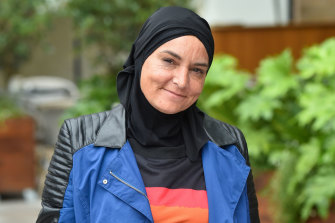 Her cottage was appointed in bright, saturated colours that leapt out from the monotonous backdrop of the Irish sky with the surreal quality of a pop-up book. Bubblegum roses lined the windows, and the Hindu goddess Durga stretched her eight arms across a blanket on a cosy cherry couch. When O’Connor, 54, gave me a little iPad tour during our video interview, the place seemed to fold in on itself: The flowers were fake ones she bought on Amazon.com, and her pair of handsome velvet chairs weren’t made for sitting.

“Deliberately, I bought uncomfortable chairs, because I don’t like people staying long,” she said. “I like being on my own.” But she disclosed this with such an impish giggle that it sounded almost like an invitation.

O’Connor is, no matter how hard she tries to fight it, irresistible. She exudes a tender familiarity, thanks to her cherubic smile, her loose tongue and the fact that she happens to possess one of the most iconic heads in pop culture memory. In the early ’90s, O’Connor became so famous that the very dimensions of her skull seemed inscribed in the public consciousness. If you remember two things about her, it’s that she vaulted to fame with that enduring close-up in the video for her version of Nothing Compares 2 U – and then, that she stared down a Saturday Night Live camera, tore up a photo of Pope John Paul II and killed her career.

But O’Connor doesn’t see it that way. In fact, the opposite feels true. Now she has written a memoir, Rememberings, that recasts the story from her perspective. “I feel that having a No. 1 record derailed my career,” she writes, “and my tearing the photo put me back on the right track.”

O’Connor saw herself as a protest-singing punk. When she ascended to the top of the pop charts, she was trapped. “The media was making me out to be crazy because I wasn’t acting like a pop star was supposed to act,” she told me. “It seems to me that being a pop star is almost like being in a type of prison. You have to be a good girl.” And that’s just not Sinead O’Connor.

“Crazy” is a word that does some dirty cultural work. It is a flip way of referencing mental illness, yes. But it’s also a slippery label that has little to do with how a person’s brain works and everything to do with how she is culturally received. Calling someone crazy is the ultimate silencing technique. It robs a person of her very subjectivity.

By the time O’Connor appeared on SNL, in October 1992, she had already been branded as insane –for boycotting the Grammy Awards where she was up for record of the year (they recognised only “material gain,” she said) and refusing to play The Star-Spangled Banner before her concerts (because national anthems “have nothing to do with music in general”). But now her reputation felt at permanent risk. 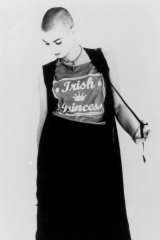 O’Connor pictured in 1992, the year of her infamous SNL appearance. Credit:EMI Records

“I’m not sorry I did it. It was brilliant,” she said of her protest against abuse in the Catholic Church. “But it was very traumatising,” she added. “It was open season on treating me like a crazy bitch.”

Soon after the show, O’Connor appeared at a Bob Dylan tribute concert, and when the crowd booed, she was so taken aback she thought, at first, that they were making fun of her outfit. Joe Pesci threatened to smack her in an SNL monologue, and later, on that same stage, Madonna mocked her in a gently condescending fashion, play-scowling and ripping up a photograph of tabloid-star sex offender Joey Buttafuoco. O’Connor was condemned by the Anti-Defamation League and a group called the National Ethnic Coalition of Organisations, which hired a steamroller to crush hundreds of her albums outside her record company’s headquarters. The Washington Times named her “the face of pure hatred” and Frank Sinatra called her “one stupid broad.”

Now O’Connor’s memoir arrives at a time when the culture seems eager to reassess these old judgments. The top comment on a YouTube rip of O’Connor’s Behind the Music episode is: “Can we all just say she was right!” Few cultural castaways have been more vindicated by the passage of time: child sexual abuse, and its cover-up within the Catholic Church, is no longer an open secret. John Paul II finally acknowledged the church’s role in 2001, nearly a decade after O’Connor’s act of defiance.

But the overreaction to O’Connor was not just about whether she was right or wrong; it was about the kinds of provocations we accept from women in music. “Not because I was famous or anything, but because I was a human being, I had a right to put my hand up and say what I felt,” O’Connor said. Some artists are skilled at shocking in a way designed to sell more records, and others at tempering their political rage into palatable music, but “Sinead is not the tempering type,” her friend Bob Geldof, the musician and activist, told me. “In that, she is very much an Irish woman.” 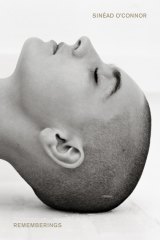 O’Connor’s memoir Rememberings, set to be published on June 1, arrives at a time when society seems eager to reassess old judgments.Credit:AP

O’Connor’s statement on SNL was more personal than most knew. In the book, she details how her mother physically abused her throughout her childhood. “I won the prize in kindergarten for being able to curl up into the smallest ball, but my teacher never knew why I could do it so well,” she writes. There is a reason, in the Nothing Compares 2 U video, she begins to cry when she hits the line about her mama’s flowers. O’Connor was 18 when her mother died, and on that day, she took down the one photograph on her mum’s bedroom wall: the image of the pope. O’Connor carefully saved the photo, waiting for the right moment to destroy it.

Instead, O’Connor felt freed. “I could just be me. Do what I love. Be imperfect. Be mad, even,” she writes in the book. “I’m not a pop star. I’m just a troubled soul who needs to scream into mics now and then.” She sees the backlash as having pushed her away from the wrong life, in mainstream pop, and forced her to make a living performing live, which is where she feels most comfortable as an artist.

O’Connor still shaves her head, herself, about every 10 days. “I just don’t feel like me when I have hair,” she said. She usually wears a hijab over it now; she converted to Islam several years ago and started going by the name Shuhada Sadaqat, though she still answers to O’Connor, too. She wrote the first part of her memoir in 2015, but after having a hysterectomy and “a total breakdown,” as she puts it in the book, it took time for her to revisit the project.

She spent six years in and out of mental health facilities – the book is partly dedicated to the staff and patients at St. Patrick’s University Hospital – and she now has some clarity about how her mind works: chiefly, that she has complex post-traumatic stress disorder and borderline personality disorder. Her difficulty remembering the post-SNL period is also the product of trauma. “It was a very lonesome, lonesome 10 years,” O’Connor said. “I really trust the subconscious,” she added. “If it doesn’t want you to remember something, there’s a very good reason for that.” 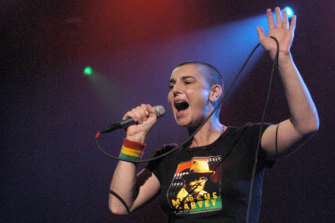 The singer says she is most comfortable performing live on stage. Credit:AP

O’Connor never understood why people were so drawn to her music. But a few years ago, she was preparing to head out on tour after a long break from the road, and “I couldn’t remember the bloody lyrics of any of the songs,” she said. For the first time, she browsed the internet for old artefacts from her career. “I was like, Jesus Christ, this is really good,” she said. “That’s me! Oh my God!”

A couple of years ago, Irish producer David Holmes approached O’Connor, star-struck at an event, and asked if she’d make a record with him about healing. “She is just an incredibly complex individual and she should never be judged,” Holmes told me. “She doesn’t go out of her way to try and hurt anyone. She’s just Sinead, and she wears her heart on her sleeve.” Their seven-track album No Veteran Dies Alone is due out later this year.

O’Connor’s ethereal sound has acquired an appealingly raw undercurrent. When she sings, on the title track, “There are two mes, the one that you see/and the real me, who I’m not supposed to be,” her pull is undeniable. As Holmes put it: “She’s got that voice, it’s like a friend.”

O’Connor is happy being on her own, with her garden and her Mayfair cigarettes and her iPads and her “imaginary boyfriend,” Taye Diggs, to keep her company via episodes of Murder in the First. “I haven’t been terribly successful at being a girlfriend or wife,” she said. “I’m a bit of a handful, let’s face it.”

But a few months ago, when she moved into her blissfully remote cottage, she found that several other single women lived alone nearby. Soon a couple of them had come by offering bread and scones, and she found herself with a crew of girlfriends for the first time since she was a teenager. “We bury bodies for each other,” she said.

The trouble of releasing a memoir is that it has forced O’Connor to relive her past, and that can be a traumatic experience, even if it does spur a cultural reckoning. “Down the mountain, as I call it, nobody can forget about Sinead O’Connor,” she said. But up in the village, nobody cares, “which is beautiful for me,” she said. “It’s lovely having friends.”