Tensions are building in the West Australian Liberals just three weeks out from a crucial state conference where the party will consider reforms to dent powerbroker influence.

On July 5, former Liberal MP and state president Norman Moore threatened legal action against the party if it delayed or refused his request for access to a register of members’ contact details. 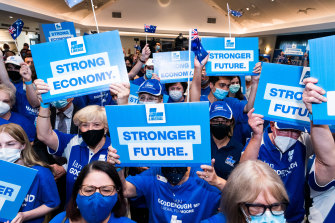 The upcoming state conference will consider changes to the party’s constitution after two huge election defeats in WA.Credit:James Brickwood

He applied for a copy of the register under the WA Associations Incorporations Act on June 19 in a statutory declaration on behalf of a group of prominent Liberals including Mike Nahan, Danielle Blain and Bill Hassell.

Moore wants to use the register to press the lay party to adopt reforms recommended by the report, co-authored by Blain, on the party’s 2021 election loss.

Moore and Liberal state director Stuart Smith had a back and forth over the request from June 27 to July 7 in an email chain seen by WAtoday.

Smith said the application was incomplete and on July 5 requested clarification about who Moore would share the list with.

He also shared other party members’ concerns that they did not want their details shared for safety and professional reasons.

Moore’s patience ran out the same day, and he threatened to take the issue to the State Administrative Tribunal.

“You are required under the Act to provide the Register,” he told Smith.

“If you choose not to do so, or delay your response in an unreasonable way, then I will have no option other than to refer the matter to the State Administrative Tribunal or the relevant Department.”

WAtoday understands the party is considering providing Moore with the list by next week.

The emails reveal ongoing friction between the Liberals and elders, many of whom are from the Curtin division, over the party’s direction after the March 2021 state election that reduced it to just two representatives in the lower house.

The post-election report detailed concerns about powerbrokers and a group of factional heavyweights, including retired WA senator Mathias Cormann, known as The Clan.

It recommended significant changes to the party’s constitution to alter candidate preselections and membership practices to break the grip of powerbrokers.

The party will consider a number of changes at the state conference, including plebiscites for candidate selection, at the end of this month. However, some party elders such as Moore don’t believe they go far enough.

In a statutory declaration requesting the list, Moore said he wanted the list “to influence members of the party to adopt reforms recommended to a future state conference”.

WAtoday approached Smith and Moore, but both declined to comment.