The diver who didn’t dive, the swimmer who couldn’t see and the rowers who simply sank! Ten unfortunate fails at the Tokyo Olympics that had us glued to our screens

Viewers watching at home had plenty of action to enjoy and achievements to marvel at during the 2021 Tokyo Olympics. But even the very best can have off-days. And while we all enjoy watching incredible feats of athleticism, sometimes things going wrong can prove to be just as engrossing. Here’s a look at some of the extraordinary action from the Games that caught our attention for the wrong reasons, whether it be real misfortunate or terrible misjudgments. 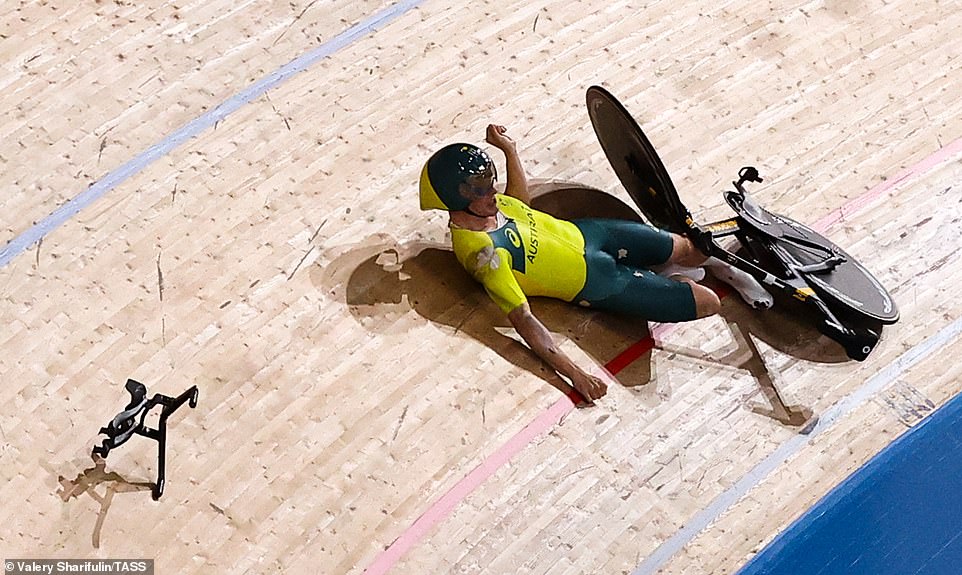 Porter’s handlebars give up on him: Australian cyclist Alexander Porter was given a nasty scare when his handlebars snapped off his bike during the men’s qualifying for the team pursuit. The 25-year-old was riding at 65km/h when he suffered the catastrophic crash, just over a kilometer into their 4000m ride. Porter, riding at the rear of their four-rider formation, initially seemed to have crashed on the bend, but replays showed it was a shocking equipment failure to blame as he fell head-first. 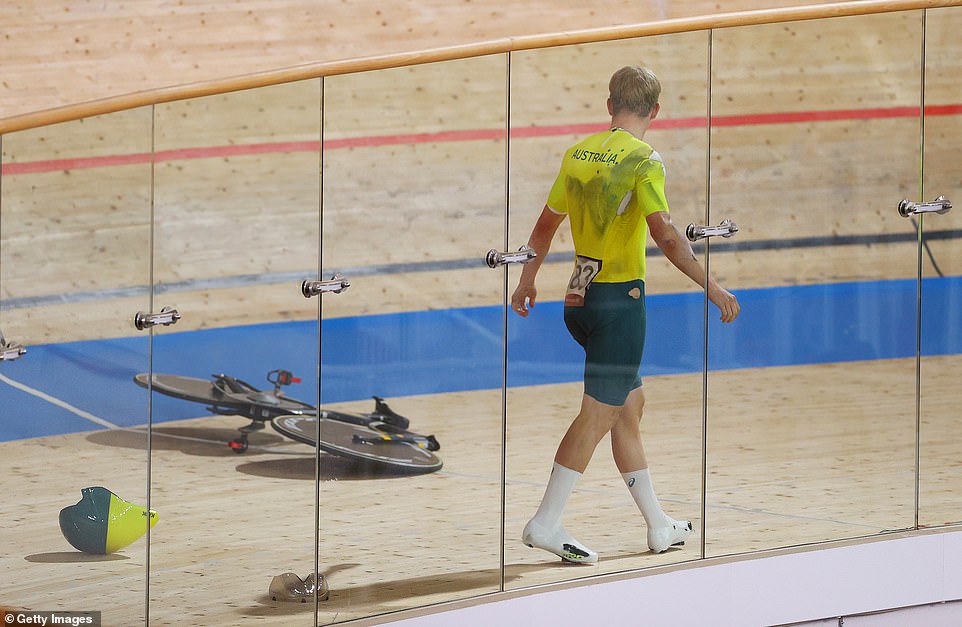 It was somewhat fortuitous that he was at the back of the team, and so did not take down any of the other riders. When his teammates realized what had happened, they signaled for a restart. Porter suffered a torn skinsuit and was furious as he walked back to the Australian team pits at Izu Velodrome. The quartet returned later for a second run, but failed to qualify in the top four in what was a huge shock, and therefore missed out the chance to race for gold. 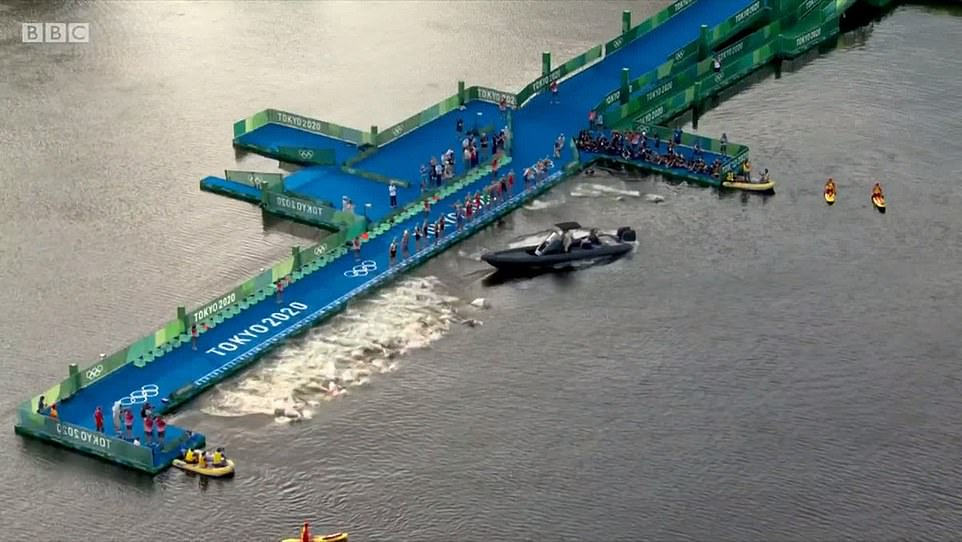 Boat disrupts triathlon start: The men’s triathlon got off to a shambolic start as the starter’s gun was was fired just as a bot reversed to block off half the field. Many competitors dived in, but the rest were left on the pontoon bemused as the camera boat jerked right in front of them. It proved difficult to alert those in the water to the mistake. They carried on swimming, unable to hear the alert horn being sounded, and had to be stopped by jet skis racing up ahead of them. The race got underway for the second and final time 10 minutes later, with all boats safely out of the way and the athletes having a clear route through the water. Alex Yee went on to win silver for Great Britain in the race, before teaming up to win gold in the mixed relay event later in the week. 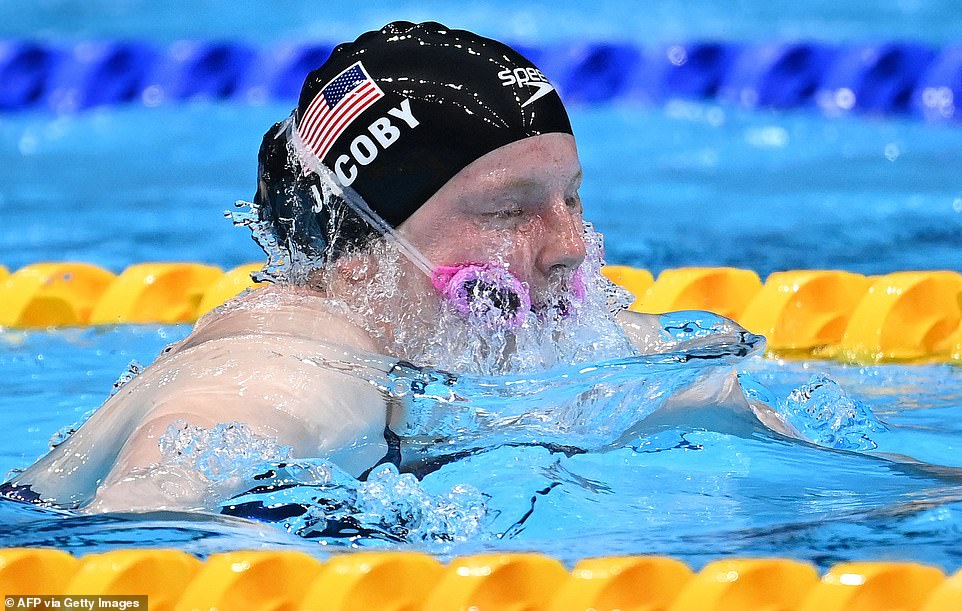 Swimming 100m without goggles: When 17-year-old Lydia Jacoby dived into the pool in the final for the US’ second leg of the mixed medley relay, the challenge facing her could hardly have been more daunting. She was racing on the same leg as Adam Peaty, who had recently defended his 100m breaststroke title and is one of the most dominant figures in the sport. Jacoby would not have expected to have been able to keep up with Peaty, but she would at least liked to have seen the task ahead of her. 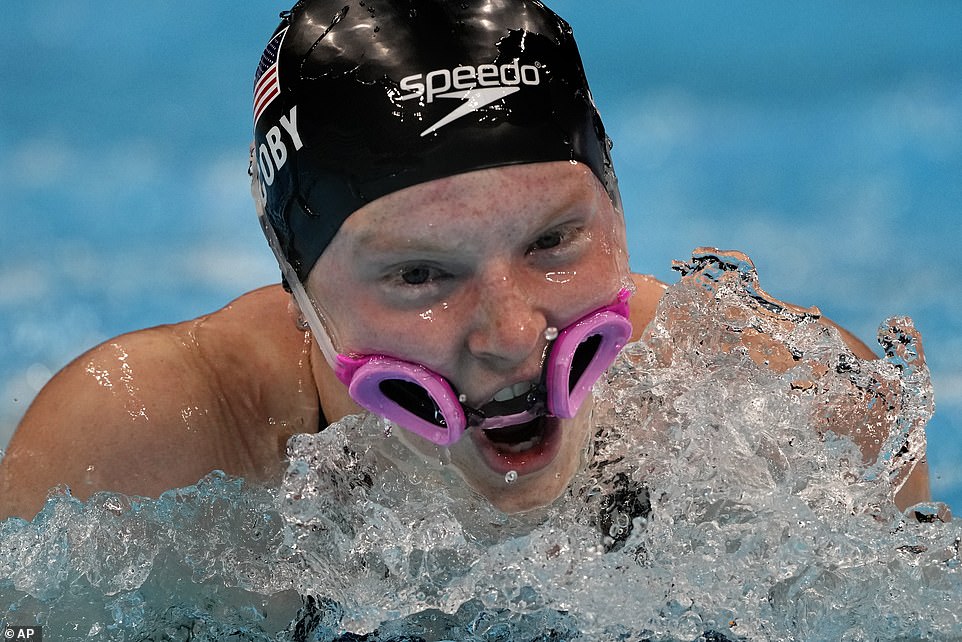 Her goggles fell down from her eyes onto her mouth as she entered the pool, and that was how they remained as she was unable to adjust them during her two lengths of racing. Tied for the lead when she started her leg, Jacoby battled on to hand over to Tori Huske is sixth place. The US finished in fifth, with the British quarter winning with a world record time. Jacoby admitted afterwards she struggled having to swim with the goggles slipping down her face. ‘I was definitely panicking,’ she said. ‘My turn was where it was most rough because I couldn’t see the wall.’ 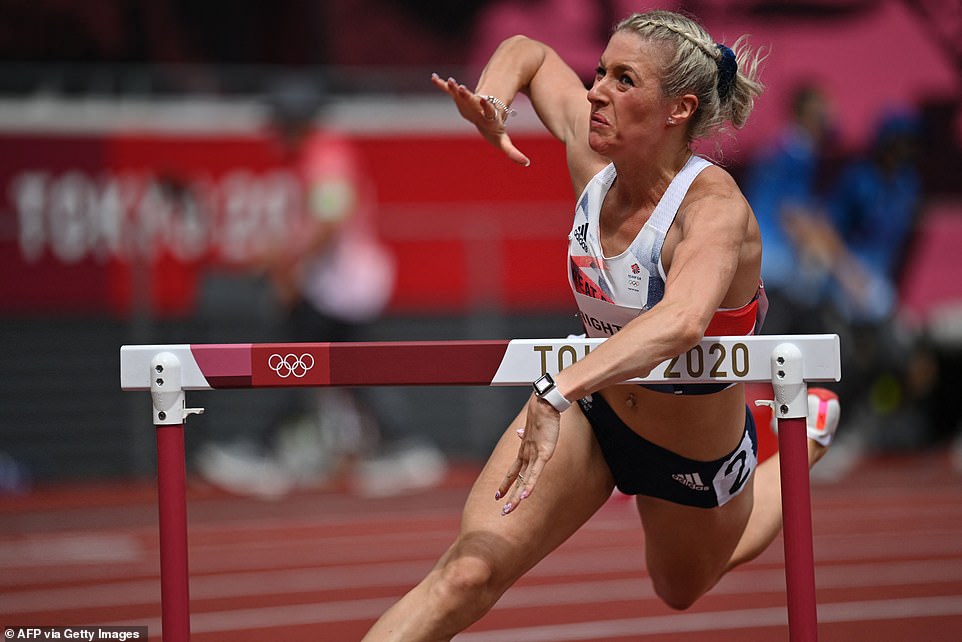 Knight’s horrible Tokyo experience: Few endured a more miserable time in Tokyo than British 400m hurdler Jessie Knight. The bad news started early on in the 27-year-old’s Olympic experience, as she was informed she had been in close contact with someone on her flight to Japan who had tested positive for Covid-19. That meant isolation in her room and a major disruption to her training and preparation for the Games. 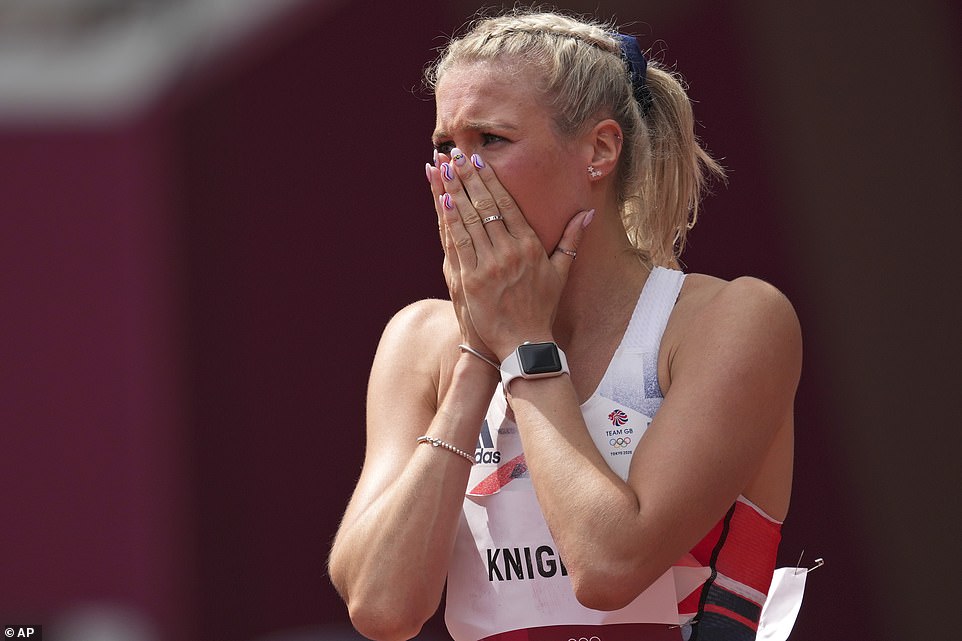 When she finally got onto the track for the 400m hurdles heat, it was more heartbreak for Knight and a cruel end to her Olympics. She tripped as she approached the first hurdle and clattered into the obstacle, left on the floor as the painful emotion of the situation hit her. Understandably Knight, who gave up her job as a primary school teacher to pursue her Olympic dream, did not stop to talk about it afterwards. 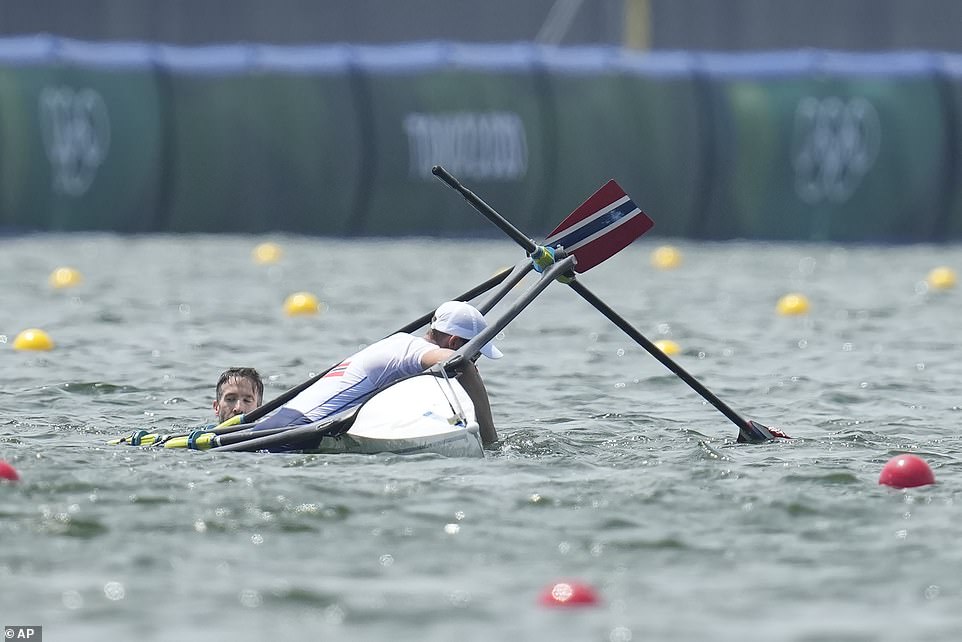 Norwegian boat capsizes: Bronze medallists five years ago in Rio, Norway arrived in Tokyo full of hope for another place on the podium in the men’s lightweight double sculls. Kristoffer Brun and Are Weierholt Strandli looked to be on course to reach the competition’s final as they headed towards the last 500 meters in the first of the semi-finals. But they saw their hopes dashed in bizarre circumstances as they capsized during the race, despite battling to stay afloat briefly. 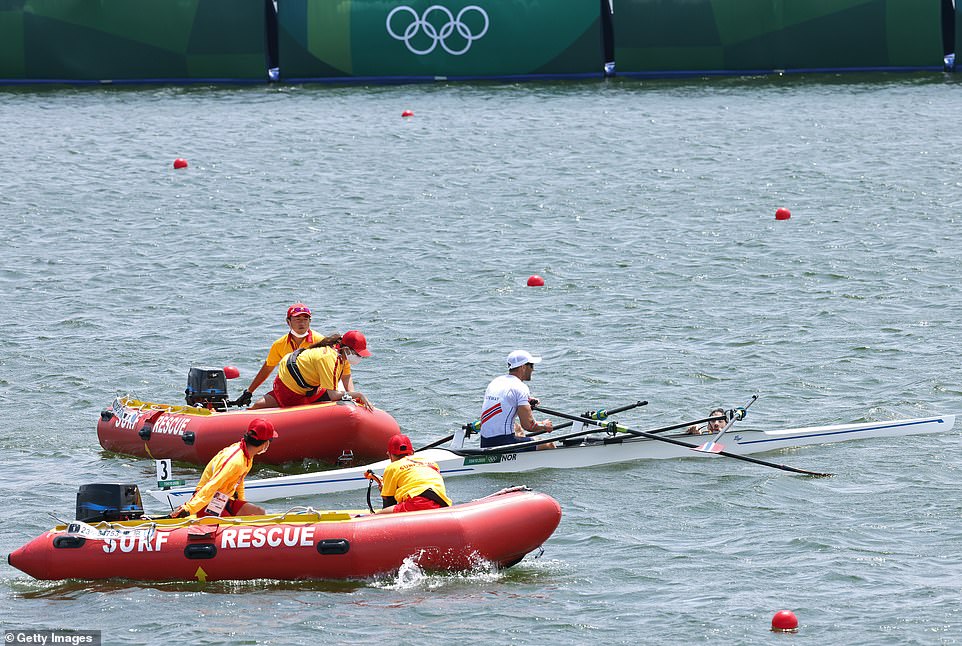 Brun and Strandli, looking exhausted, held on to their boat floating on the surface before they were helped out by lifeguards coming to their aid on a rescue boat. The pair though were determined to complete the race and eventually got back into their boat to complete the semi-final. Their eventual time of 12:16.25 was double that of semi-final winners Germany.

Jackson’s terrible misjudgment: Many of the incidents that have caught the attention for the wrong reasons in Tokyo have been down to incredible misfortune, but Shericka Jackson has no-one to blame but herself. The 27-year-old won bronze in the women’s 100m race, behind her two Jamaican teammates Elaine Thompson-Herah and Shelly-Ann Fraser-Pryce, and got her 200m campaign underway on Monday. Unfortunately for the Jamaican sprinter, it was a much shorter campaign than anticipated.

Jackson eased out of the blocks and appeared to be cruising around the bend, content to come through the heat in second and advance to the semi-finals. But as she jogged towards the finish line, those around her were still pushing Portugal’s Lorene Dorcas Bazolo edge her out to take second and crucially Italy’s Dalia Kaddari beat her into third. That left her relying on going through as a fastest loser, but her time was not quick enough and her 200m hopes were dashed at the first stage. 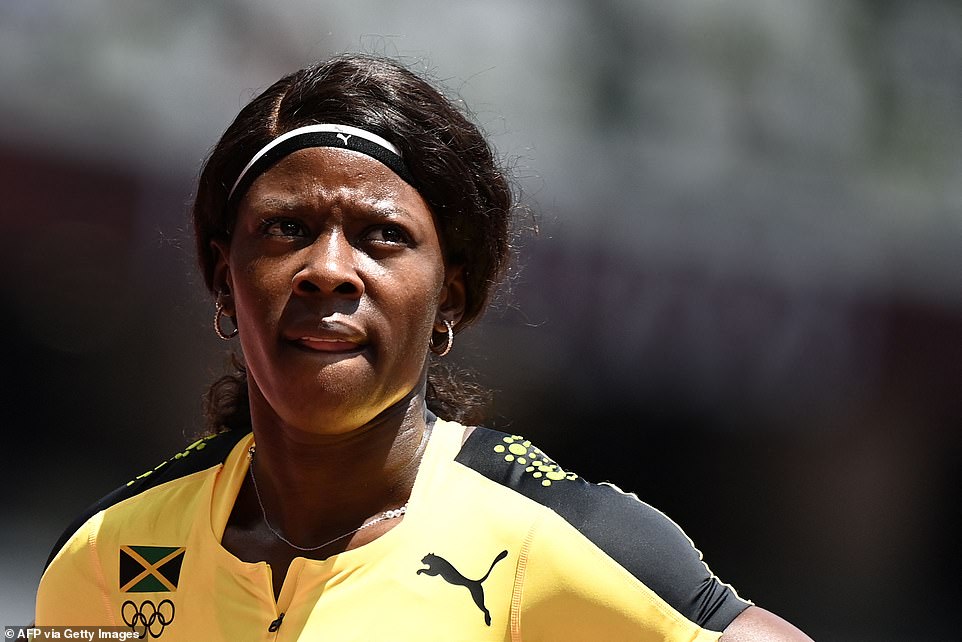 Former runner Steve Cram said on the BBC: ‘Shericka Jackson was almost just jogging round – what on earth? Why take such risks? I’m sorry to sound exasperated but I am, on her behalf, on her coach’s behalf and her team-mates. It’s just not necessary.’ 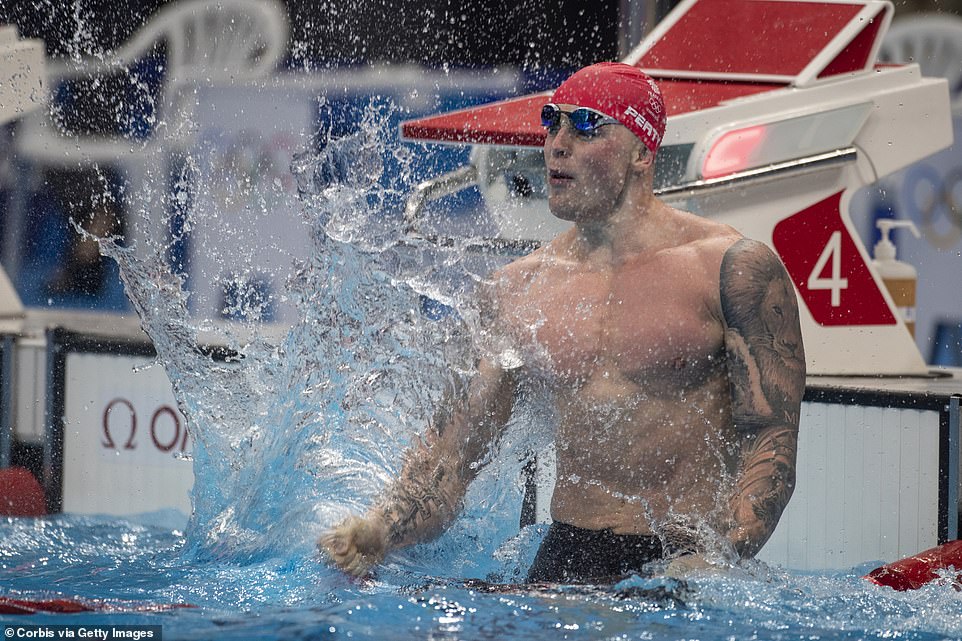 Peaty’s BBC language: After dominating the 100m breaststroke event for so many years, Peaty arrived in Tokyo with a huge amount of pressure and expectation on his shoulders. He duly delivered though, almost inevitable for a man who owns the 16 quickest times in the history of the event. In an interview with the BBC after his win, Peaty was unable to contain the outpouring of emotion. He said: ‘It’s the best person on the day, who’s the most adaptable – and really who…’ before launching into expletives. ‘Apologies for the swearing, I’m very emotional.’ He went on to secure a gold in the 4x100m mixed medley relay and a silver in the 4x100m men’s medley relay, but thankfully for the broadcasters kept his language slightly more under control. 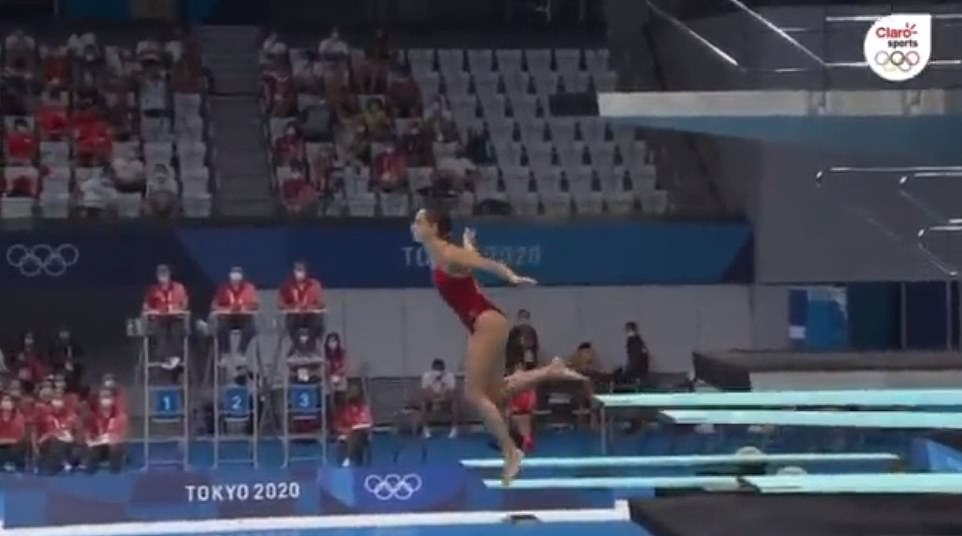 Ware’s 0.0 dive: Viewers of the Olympic diving events have been used to seeing all sorts of combinations of somersaults and twists as they watch on in awe. But Canada’s Pamela Ware suffered every diver’s worst nightmare as she produced an effort that looked rather more attainable to those watching at home. Making her Olympics debut in Tokyo, Ware misstepped on her approach to the springboard, causing her to plummet into the water with her feet hitting the surface first. That resulted in a score of 0.0, and the Canadian revealed afterwards that she pulled out of attempting the complex dive to avoid an injury. 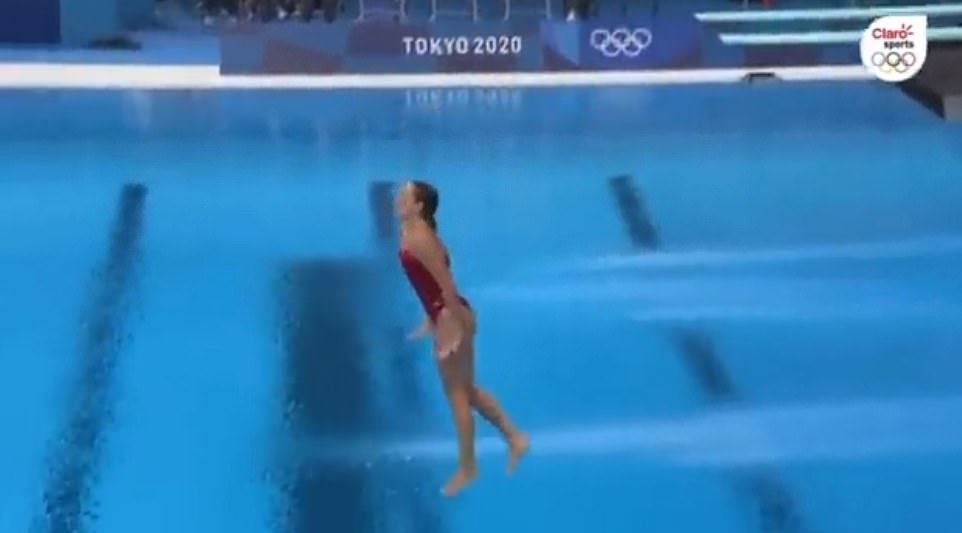 ‘What we do in the competition is just a tiny factor of what we actually do to get to where we are,’ Ware said. ‘I was so ready for this competition, and I made a mistake. It could have happened to anybody, but it happened to me at the wrong time. I think that if I would have done the dive, I could have possibly hurt myself.’ 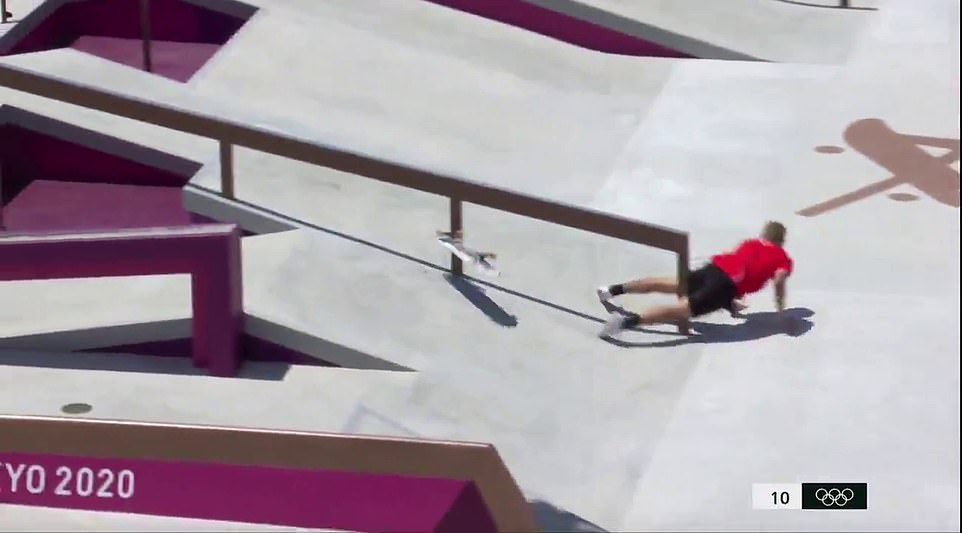 Skateboarder’s painful crash: Peruvian Angelo Caro Narvaez suffered a very painful looking crash in the first skateboarding event in Olympic history. Skateboarding is one of five new events to take place at the Games, and Narvaez was a medal contender going into the day but he couldn’t have got off to a worse start during the preliminary round. The Peruvian attempted to grind a rail but couldn’t quite execute the landing and fell off his board and crashed groin first into the opposite railing. 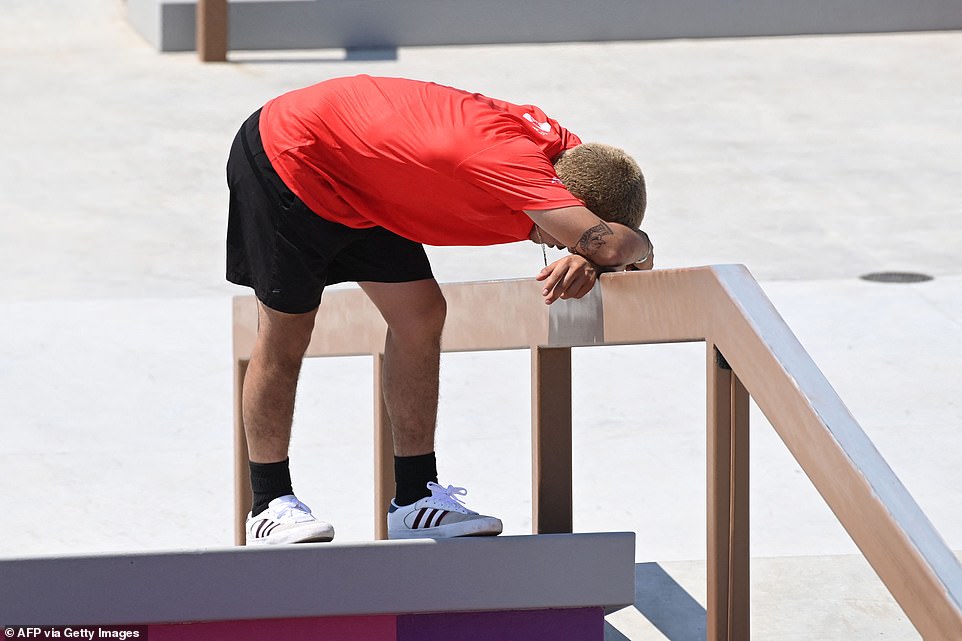 Understandably, the 21-year-old looked in pain and took a moment to compose himself after the eye-watering crash. He eventually got to his feet and slapped his legs in frustration but fortunately he wasn’t too badly hurt. Narvaez finished the event in fifth, unable to go on and secure a medal, and returned home with painful memories from Tokyo in more ways than one. 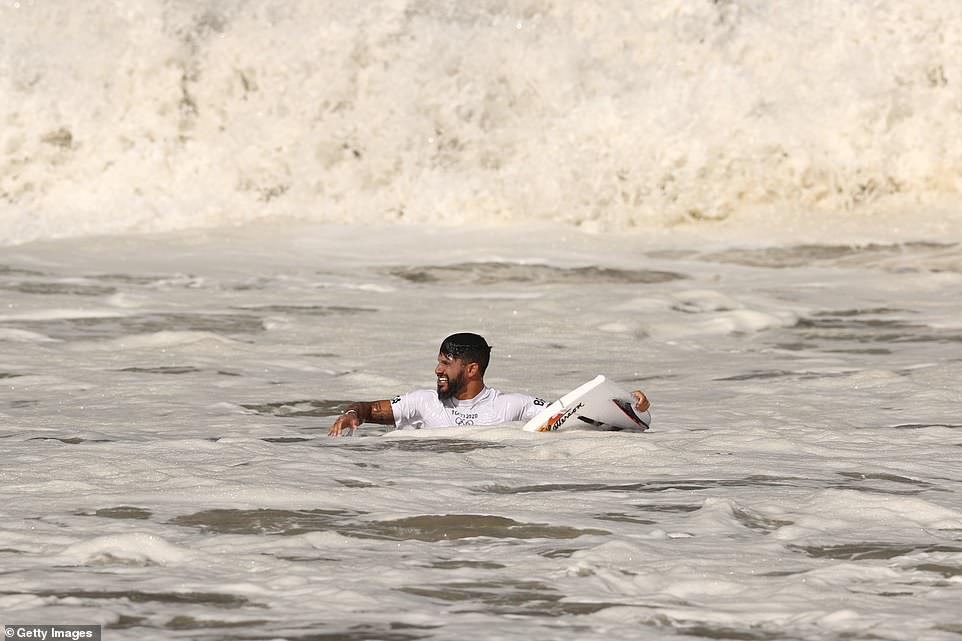 Surfboard snaps: Things were looking good for Brazilian surfer Italo Ferreira as he made it through to the gold medal match in Tokyo. But just a few minutes into the competition, Ferreira’s surfboard snapped, leaving him floating in the water and looking on confused. 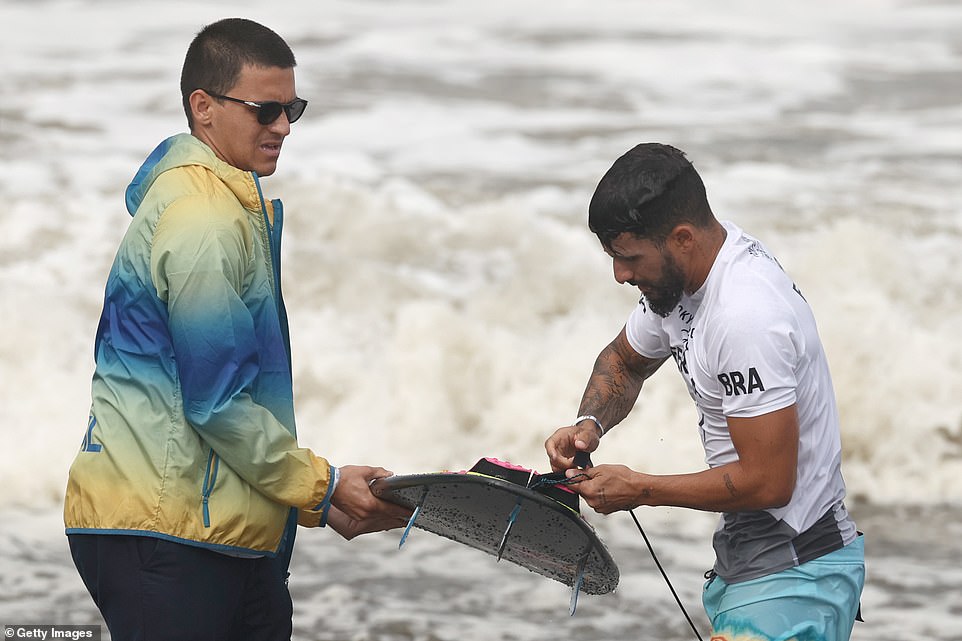 While his opponent Kanoa Igarashi made the most of the opportunity, enjoying the waves to himself, Ferreira’s coach was tasked with quickly providing a new board for his athlete to use. Thankfully for the Brazilian, he didn’t have to wait long, and armed with his new equipment he went on to win the gold medal – the first surfing gold in Olympic history.