In 2011, two Australian environmentalist millionaires, Wotif.com co-founder Graeme Wood and Kathmandu clothing brand founder Jan Cameron, bought themselves what was then the world’s largest woodchip mill and infuriated both the state government and local forestry industry by closing it down.

“I think it is time to move on. I’m interested in the future, I’m interested in economic development [and] Tasmania needs it badly,” he told the ABC at the time. “I see this as the most effective way of achieving that.”

What he might not have known was that their decision to shutter the Triabunna Mill brought about a “profound and unheard of miracle”, one of Australia’s most acclaimed scientists told the Herald and The Age yesterday.

According to a scientific paper published this week in the journal Environmental Research Letters by Griffith University’s Professor Brendan Mackey and Lindenmeyer, the closure of Triabunna meant that in the years that followed Tasmania was one of the first jurisdictions in the world to become not just net zero, but carbon negative.

Unlike mainland Australia, Tasmania relies mostly on hydroelectric power. As a result, Mackey explained, the state’s main cause of greenhouse gas emissions was logging in native forests. When old-growth forests were logged, massive amounts of carbon were released into the atmosphere. 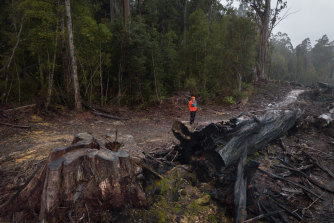 An area of old growth forest in the Huon Valley, Tasmania.Credit:Jason South

These must be accounted for in greenhouse gas emissions inventories. But jurisdictions may also remove from the inventory the amount of carbon being stored in undisturbed state forests. The rules governing this accounting are complicated and arcane, Mackey said.

Last year, Mackey and Lindenmeyer started going through Tasmania’s emissions inventories over the past decade, and they then compared them with how much land in state forests was now being left undisturbed as a result of the closure of Triabunna Mill.

What they found was that Tasmania had gone from being a net emitter of around 10 million tonnes of carbon dioxide each year, to a net sink of around the same amount.

The results of their research surprised both men.

“We hear a lot about carbon neutral but not carbon negative. This is one of the first times on the planet that anybody has ever done this kind of reversal,” Lindenmeyer said.

Mackey said the findings suggest that should other states that have old-growth logging industries – such as NSW and Victoria – decide to protect their forests rather than log them, they could have a huge impact on state and national emissions.

Today, the old mill is an event and arts venue sprawling across 43 hectares of waterfront land, which is, its website boasts, “managed by a bunch of provocateurs intent on charting a sustainable path”.

A guide to the environment, what’s happening to it, what’s being done about it and what it means for the future. Sign up to our fortnightly Environment newsletter here.