Sydney Festival has received its largest ever philanthropic donation from a leading businessman who shot to public prominence when he purchased Kurt Cobain's MTV Unplugged guitar at auction for nearly $9 million.

Self-made millionaire Peter Freedman is the festival's knight in shining armour, having committed a minimum $5 million.

Freedman was first introduced to the Sydney Festival 10 years ago by then festival director and friend Lieven Bertels and he made his first philanthropic gift of $100,000 in 2015. His gifts to date have totalled $1.6 million. 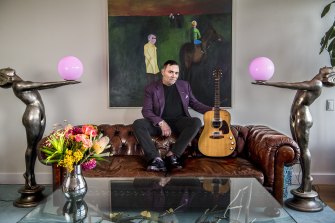 Peter Freedman with Kurt Cobain’s guitar which he bought in 2020 and will send on tour to highlight the plight of artists and musicians due to the pandemic.Credit:Steven Siewert

But the $5 million gift is something more serious again. "This next thing I've done is to give something they can count on and I'm going to increase it as well because things are going well for me," Freedman said. "It's a minimum. I don't get involved in discussions or what they spend the money on, they are the masters of this. I just want to support them in any way I can."

Freedman's sound installation company, Rode, is a homegrown export manufacturing success story but it's only lately that he has emerged as a new force in philanthropy.

With a marketer's eye, he is busy drawing up plans to tour Cobain's 1959 Martin D-18E guitar around Australia and overseas to raise awareness for the arts and lobby governments for proper industry recognition and funding.

Once a protective case has been commissioned, first stop will be Mudgee, a town with which Freedman has had a long association as the former owner of the Mudgee Regent. Eventually, the guitar will be re-auctioned with proceeds going to the performing arts. 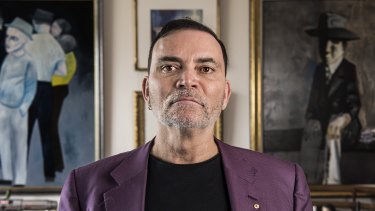 Freedman has been a supporter of the Sydney Festival for a number of years.Credit:Steven Siewert

"My dad died in '87 and I borrowed a lot of money in the late '80s and ended up being hugely in debt and interest rates went through the roof," Freedman relates. "It's a horror having been in a position where no matter how hard I worked I was never going to get out of it. I understand that stress."

Even at their peak Nirvana never made any money. "One in many million [musicians] makes a little bit of money but they don't make real money, " Freedman said.

Incoming Sydney Festival director Olivia Ansel, said the festival's new commissions, major presentations, and the livelihoods of many Australian artists had been possible because of Freedman's generosity. He also significantly helped to ensure The Headland stage at Barangaroo became a reality.

The festival posted an $896,000 operating surplus in 2018/19 and says a deficit of $14,343 will be posted for 2019/2020. This year COVID-19 forced the cancellation of all overseas artists and late border closures caused the last-minute cancellation of three acts.

Freedman is a collector of art, mementos, and paraphernalia that cut across his eclectic and divergent interests: from Bradman's first baggy green cap to the recovered steering wheel of the Japanese sub that torpedoed Sydney Harbour.

His walls are graced by works by Garry Shead, Robert Dickerson, Charles Blackman and Margaret Olley. Max Dupain's The Sunbaker is in the vestibule but it's David Moore's Migrants Arriving in Sydney that has sentimental value, taken the very year Freedman, aged 8, arrived with his Swedish parents from England.

Cobain's guitar stands within Freedman's gaze by his balcony and he tenderly handles it for the photograph. Freedman thought the guitar would open doors but he underestimated the public response, the guitar having a powerful mystique that draws music lovers young and "old buggers like me".

Freedman made bids through a new philanthropic foundation with hands shaking, calculating in his head if he could afford the rapidly rising asking price, finally blowing his rivals out of the water with a $1 million heart-starting jump bid. He set a world record price for guitars in the process.

After Mudgee, the guitar is headed for other Australian galleries and museums, perhaps including the Powerhouse Museum.

Overseas, possible destinations are the Saatchi Galleries in London, the Rock and Roll Hall of Fame, and Seattle Museum of Pop Culture as well as RODE House, a live performance venue within a new contemporary arts space at Momentary in Arkansas of which he was a founding $1 million donor, partnering the Walton family.

Other charitable works he prefers to leave well under the radar. He brings in containers of tents and bedding for the homeless for St Vincent de Paul Society to distribute and has a couple of other causes he helps but declines to name.

For Freedman, his status as the festival's principal donor opens doors to do business while he can push his point to the government about support for artists. "I get to meet a lot of people, the governor, or the top politicians and then when you are standing side by side…" He flourishes a hand.