Super tall family has a combined height of 25 FEET

A tall story! Family-of-four who are all well over 6ft reveal they’ve had to modify their home, can’t find clothes that fit and struggled to find a car where they didn’t bump their heads

A super tall family with a combined height of 25ft have revealed how they’ve modifiied their home, and have been forced to buy special beds and clothing to accomodate their lengthy bodies.

Mother-of-two Nikki Golesworthy, 56, from Leicester, is the smallest in her family at 6ft 2in, but towers above her friends.

Whenever the family go out together, they get amazing reactions from people. 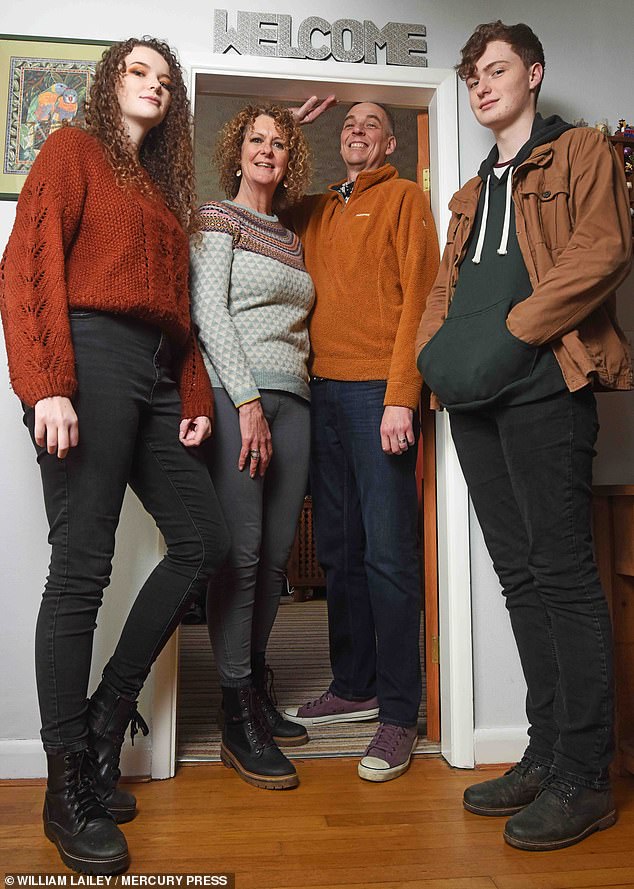 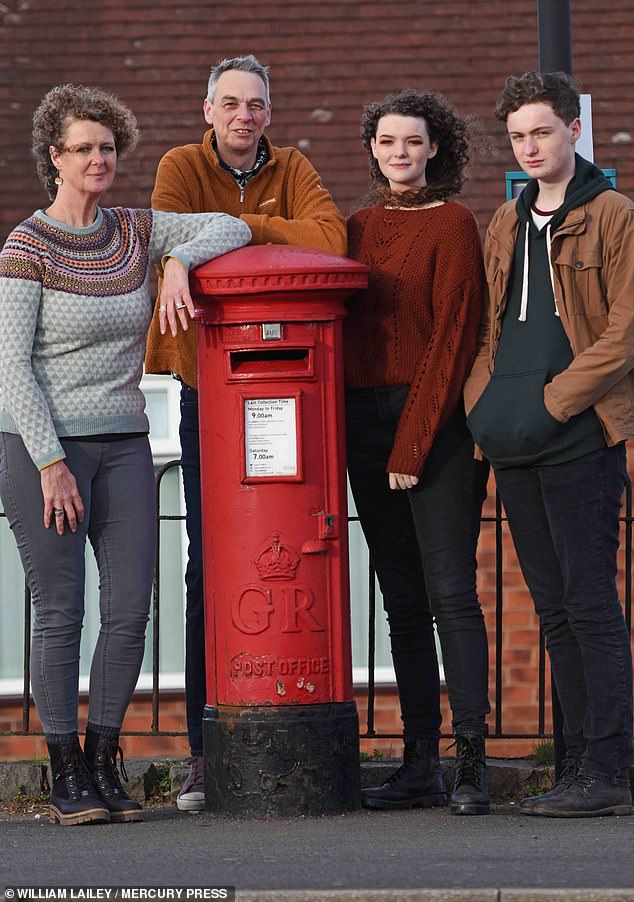 Mother Nikki is the shortest in the family, at 6ft 2in, and father Tom is the tallest at 6ft 6in. Amelie and Daniel are 6ft 3in and 6ft 4in respectively 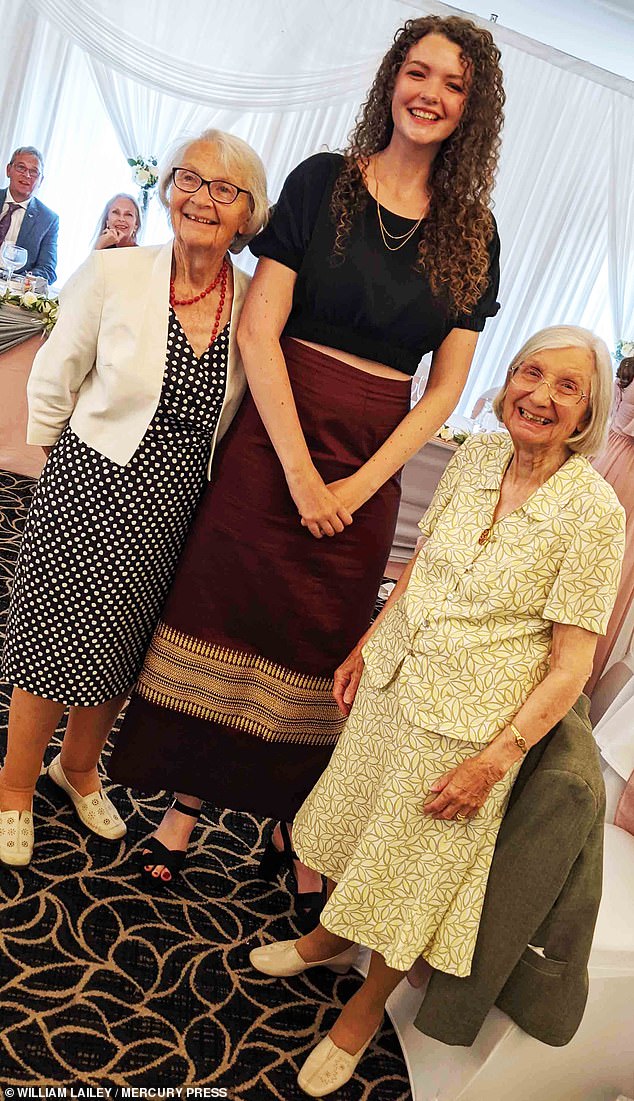 At 6ft 3in, Amelie (pictured here with her grandparents) often towers over people – including members of her non-immediate family

Nikki, who works as a designer, said: ‘It’s mostly stares, and sometimes you can hear someone say, “Oh my god they’re so tall”.

‘We usually notice when people have walked past us on the street and they do a double take.’

Nikki revealed her family struggle to find clothes that fit, and spent hours finding a new car that they could all use, a Skoda Superb.

She said: ‘My husband and son struggle to buy shirts that fit, because often ones that have long enough sleeves also have a huge collar. 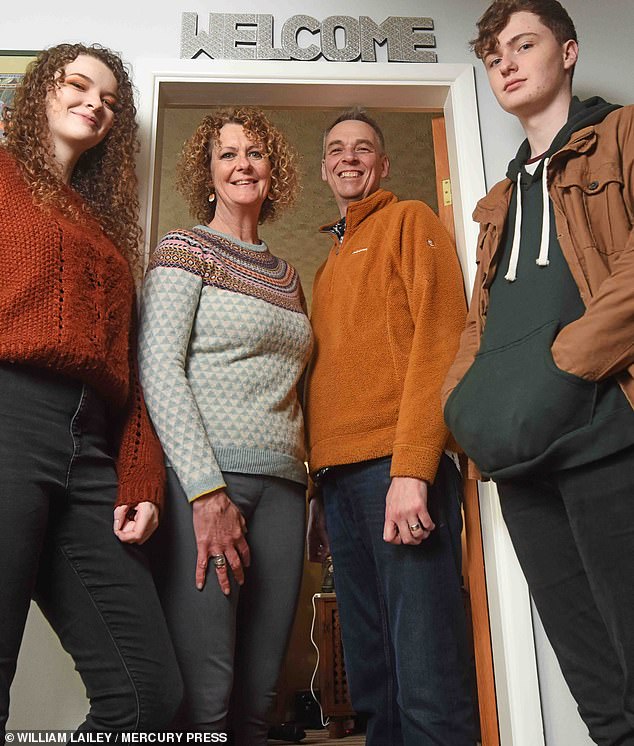 Among the struggles faced by the Golesworthy family are finding long enough trousers, and buying a car big enough for them to fit in 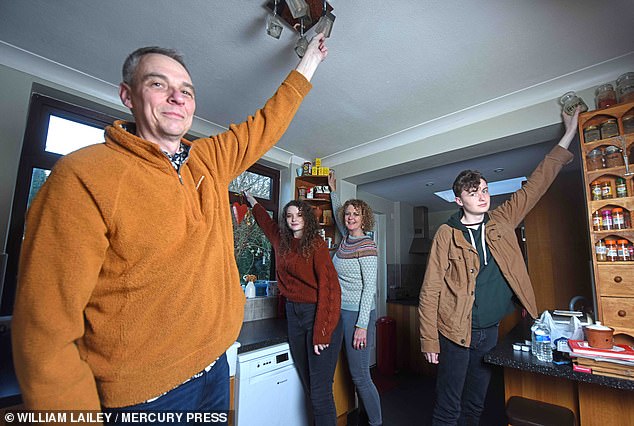 Due to their staggering height, the entire family can easily reach ceiling fixtures or items on top of tall cupboards 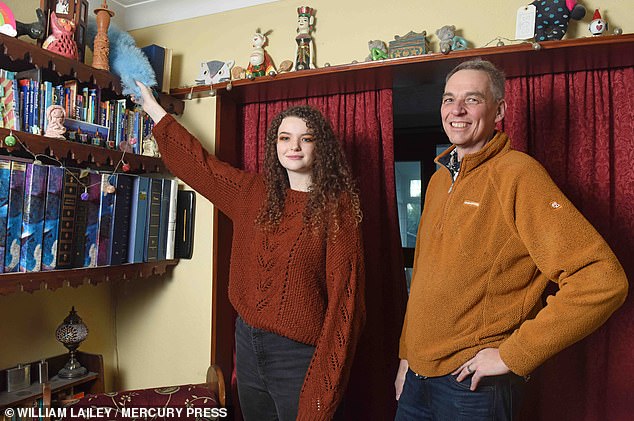 Dusting high shelves is no problem when you’re over 6ft tall, as Amelie (left) demonstrates (pictured with father Tom)

‘Both of my children were wearing two or three sizes bigger than they should be when they were at school.

‘My daughter was wearing adult men’s trousers when she was 14 or 15 because her legs were so long.’

Nikki also revealed that their home had some modifications to suit them.

She said: ‘Guests always complain that they can’t use our mirrors because they’re so high. 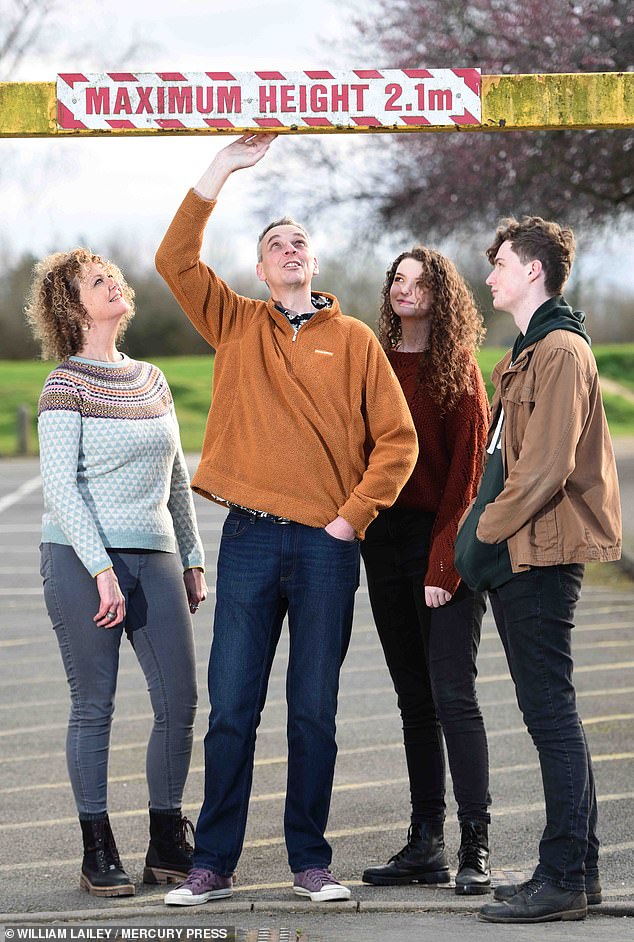 This barrier, which is over 2m tall (close to 7 ft) is not too far above Tom’s head height – and within easy reaching distance for the whole family 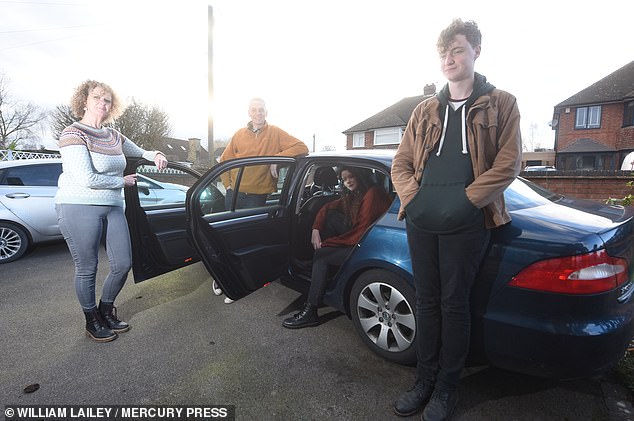 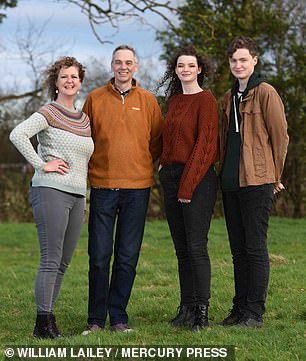 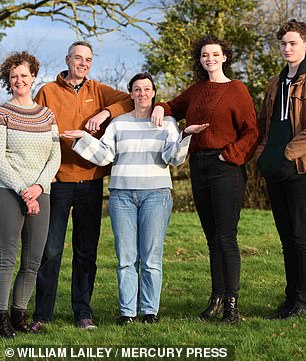 While Nikki (left) may be the shortest in her family, at 6ft 2in, she towers over her friends. Here the family is pictured with a neighbour (centre) 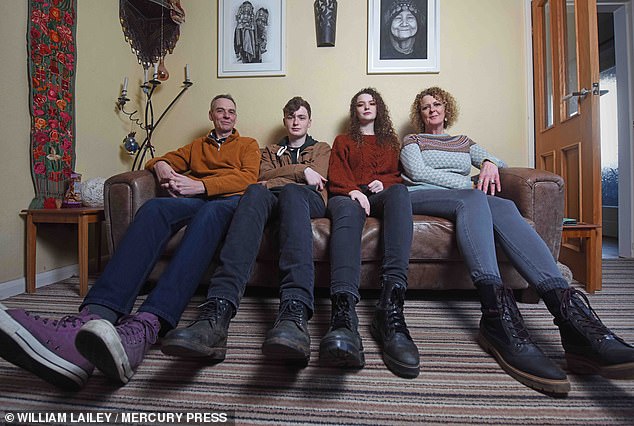 Thanks to her height, Nikki says she has a lot of room in her midsection, so when she was pregnant with Daniel and Amelie, she didn’t get very big

‘Our house already had lovely high doorframes so we don’t have to duck going in to rooms.

‘All our kitchen counters and beds are quite high as well.

‘My husband and I had a bed made when we got married, because before that we would both hang off the edge.’

Over lockdown, Nikki says the whole family forgot how tall they really were. 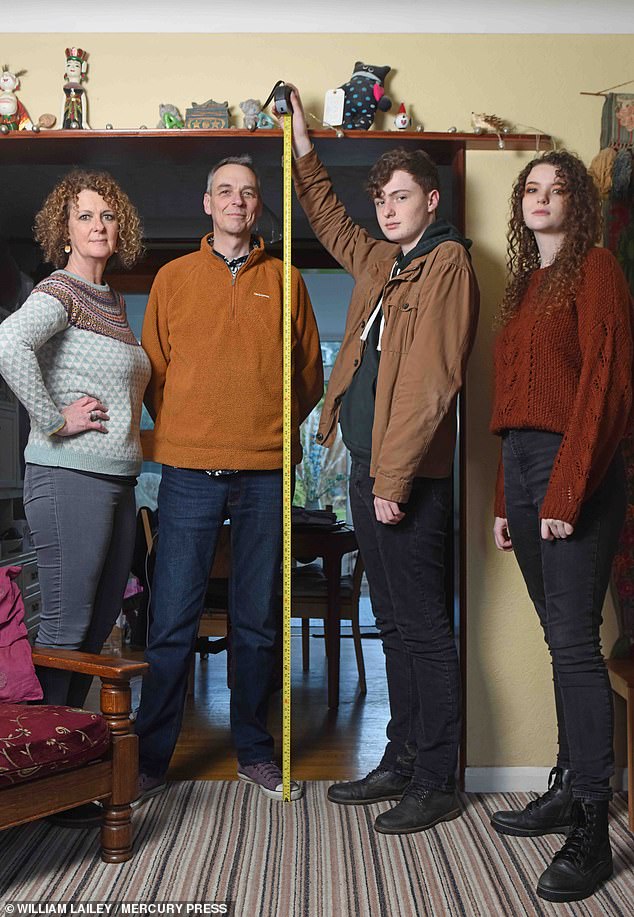 Both Daniel and Amelie (right and far right) were average weight and height when they were born, but quickly grew taller than their peers

Amelie (right) pictured with mother Nikki (left) started wearing men’s trousers when she was 14, as she could not find long enough clothes among the women’s offerings 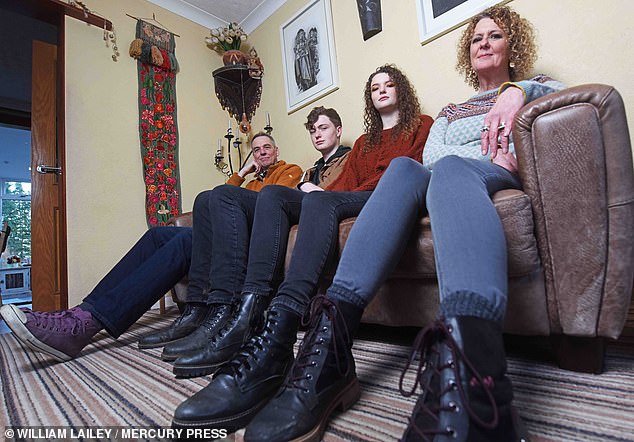 The family have had to make some modifications to their home to accommodate their height – including hanging mirrors higher, and having higher than standard kitchen counters

She said: ‘When it’s just us together, it doesn’t seem that different.

‘Last year, one of Amelie’s friends came round to drop off presents when the restrictions allowed it.

‘After she left, Amelie said, “I’d forgot how tiny normal people are”, because we’d only seen each other.’ 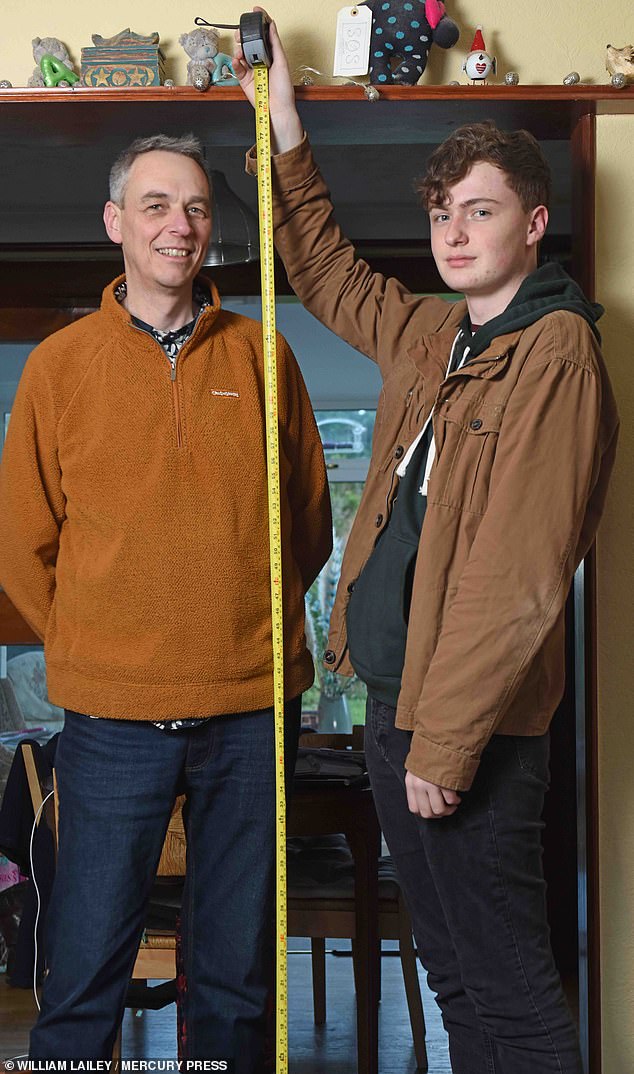 Father Tom (left) and son Daniel (right) are the two tallest members of the family, standing at an impressive 6ft 6in and 6ft 4in respectively 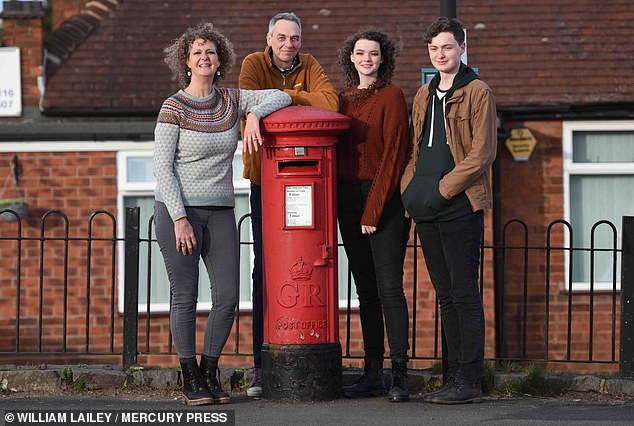 Parents Nikki and Tom had a bed made when they got married, because when they slept in standard beds, their limbs would hang off the end 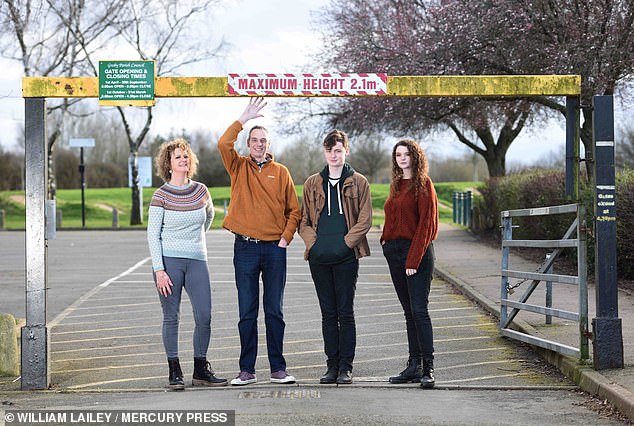 Because of their height, when the Golesworthy family all go out together, people often stare at them, and they’ve even heard strangers say ‘oh my god they’re so tall’ when walking past

Both Amelie and Daniel were average weight and height when they were born, but quickly shot up.

Nikki said: ‘They were always normal weight, and we don’t measure babies as standard in the UK.

‘I didn’t look very big when I was pregnant, because I have more space in my middle region to carry them.

‘I went out with friends when I was about eight or nine months along with Daniel, and some people didn’t even realise I was pregnant!’