Stiff and pompous, why Diana bronze statue is all wrong

If the British Royal family wished to underline their status as an antiquated institution, out of touch with the present day, they could hardly do better than commission a larger-than-life-size bronze statue of Diana, Princess of Wales. The bronze monument of The Great Man (and occasionally, Woman) is a throwback to Victorian times which implicitly accepted Thomas Carlyle’s idea that history should be written as the story of heroic individuals who acted as mentors, leaders and role models, driving social and cultural progress.

In her later years, Lady Diana, “the people’s princess”, became the subject of a cult-like popular adoration. Her every deed was eagerly reported by the media, while paparazzi photos boosted sales of magazines. Diana was portrayed as a secular saint who travelled to distant countries to campaign against land mines; who visited sick children in hospital, and victims of famine and war. By contrast, the rest of the Royal family were reconfigured as her antagonists, resentful of her goodness and the widespread admiration she inspired. 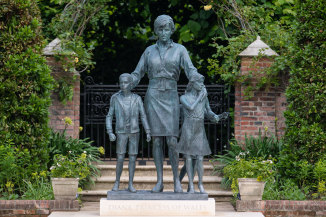 The new statue of Princess Diana was commissioned in 2017 to mark the 20th anniversary of her death.Credit:Getty Images

There is, however, another way of reading Diana’s life: as a woman fully aware of her popular image who often gave the press exactly what they wanted. As she rose in popular esteem she took her revenge on the snooty Royals, and on her faithless husband, Charles, with a mixture of highly visible good deeds and romantic scandals.

The truth is probably somewhere in-between. Nobody is entirely good or bad, nobody enjoys perfect control over the way they are perceived in the media. Diana was both kind and spiteful, dignified and immature, schemer and victim. In the eye of the camera everyone becomes an actor, and ultimately struggles to recover his or her true identity.

Today the Victorian “hero” has been supplanted by the celebrity. In place of the scruffy old poets, statesmen, matrons and scientists worshipped in the 19th century, we lavish attention on pop singers, movie stars and socialites. Where the Victorians believed people should be honoured for their achievements and character, we are more interested in how a celebrity looks, the things he or she wears, and who they’re going out with. None of this translates readily into bronze.

Our fascination with the ephemeral idea of “celebrity” (There are conventions in the United States where one can obtain autographs and merchandise from former celebrities), is an implicit admission that people are complex and changeable. The inflexible temperament captured in stone or bronze has given way to a recognition that human beings are too contradictory to be summed up in such a simplistic manner.

The result is that bronze statues now run the risk of being viewed as Kitsch – that is, as items of overblown, false emotion, masquerading as high art. Sculptor Ian Rank-Broadley has sailed perilously close to the winds with an image of a rather stern-looking Diana surrounded by an anonymous, multicultural trio of small children.

This is presumably meant to signify the Princess’s great compassion, but “compassion” is an abstract quality that quickly degrades into sentimentality in the hands of most artists. Think of all that decorative poverty in Victorian art: those poor urchins subsiding in the streets; the sick mothers reaching out to their weeping offspring; the death of Little Nell!

Children, like kittens and puppies, are notorious agents of Kitsch as it’s very hard to portray them without conjuring up saccharine ideas of cuteness and innocence. Rank-Broadley’s statue is a prime offender. People keep asking: “Who are those kids?” Answer: they are the embodiment of childhood innocence.

What we are left with is a Victorian-style monument to an archetypal 20th-century celebrity. The attempt to imbue the subject with dignity and grandeur looks merely stiff and pompous. If there were any doubt that the celebrity side of Diana is ultimately stronger than the heroic aspect, one might look at the media emphasis on whether the statue will help reunite the two estranged brothers, William and Harry. It’s a story of mythic proportions: two princes rediscover a loving bond in front of a large bronze effigy of the Great Mother. Only one small question remains: “Who the hell are those kids?”