States are working to put in place systems for people to report positive COVID-19 rapid antigen test results after national cabinet decided to move away from requiring lab-processed tests in many circumstances.

But Prime Minister Scott Morrison conceded there would be lines at PCR testing centres for the next couple of weeks until supply problems with at-home tests were sorted out. 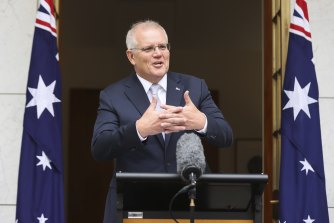 Prime Minister Scott Morrison says his primary concern for people who test positive for COVID-19 at home is making sure they get the necessary care and support.Credit:Alex Ellinghausen

National cabinet decided on Wednesday that states would no longer require a positive result on a rapid test to be confirmed via a PCR test, among a raft of measures aimed at easing the pressure on pathology labs and testing sites as the number of COVID-19 cases escalates.

Victoria announced on Thursday that it would be mandatory for people to report positive rapid test results to the state’s Health Department from Friday, while Queensland and the ACT are also working on notification processes. NSW Health did not respond to questions about whether it was planning to record the results of rapid antigen tests.

Mr Morrison said on Wednesday states would provide further information on how people should report cases, but his advice was for people to contact their doctor in the first instance.

He offered this advice again in a more nuanced way on Thursday, saying that “case numbers are less of an issue, it is connecting to care that is the issue”.

Across Australia, a record 72,401 COVID-19 cases were confirmed on Thursday although medical experts including those advising governments say the true number is probably many times higher.

“What is more important than knowing how many cases there are – which frankly is getting less and less important – what matters is how many people are in hospital, ICU, and on ventilators – that is the real measure of what the impact is,” Mr Morrison said.

Rapid tests will also start to be used in testing centres, although Mr Morrison expected PCR tests would still be dominant for a while.

“Given the supply issues over the next two weeks, that is what I would expect to occur in the majority of cases. But that gives the states a couple of weeks to get this other system in place,” he said.

Victorian Health Minister Martin Foley said positive rapid test results in the state would need to be reported to the department online or via phone so people could access the care and information they needed, including financial support while in isolation. They would be treated as “probable cases” and would have to isolate and tell contacts of their positive result.

However, until supply of rapid tests increased, Victorians with COVID-19 symptoms or asymptomatic household contacts of confirmed cases would still be able to get a PCR test.

Mr Foley said rapid tests would be the way most people confirmed they had caught the virus.

“They are very accurate among contacts and people with symptoms, and there’ll be no queuing for hours or waiting for days for a result,” he said.

A third of all tests reported in the state on Thursday, relating to the previous 24 hours, were positive, he said, and about 40 per cent of positive cases were young people.

“This level of positive tests we’re seeing in the community – the pathology system as it’s designed can’t keep up.”

On Thursday, the state opposition said it was concerned this approach meant NSW’s case data would become increasingly inaccurate, calling for a method of reporting at-home positive test results.

“We’re going to see a drop in the cases of reported COVID transmission in the community over the coming days but we will see a rise in the number of COVID cases in our community,” Labor leader Chris Minns said. “The government still needs to be aware where those cases are popping up so that resources can be deployed.“

Queensland Health Minister Yvette D’Ath said people could currently notify Queensland Health to record a positive rapid test result but asked that those who were feeling reasonably well “don’t race to get on the phones and flood our 134-COVID number” until the department had worked out a better reporting process.

She wants reporting systems to eventually become national to help governments and the medical community better understand the growth and spread of cases.

“We do still want to know that someone’s positive, but that shouldn’t have to be coming and getting a PCR test, lining up for hours and waiting days for a result,” she said.

In the ACT, it is still recommended that people confirm a positive rapid rest result with a PCR result for now.

But ACT Health Minister Rachel Stephen-Smith said the government was working as quickly as possible to set up a notification process for rapid tests.

There is an existing process for GPs to tell health authorities about notifiable diseases, but Ms Stephen-Smith said that was set up for rarer illnesses such as measles and was unlikely to be able to cope with reporting COVID-19 cases.