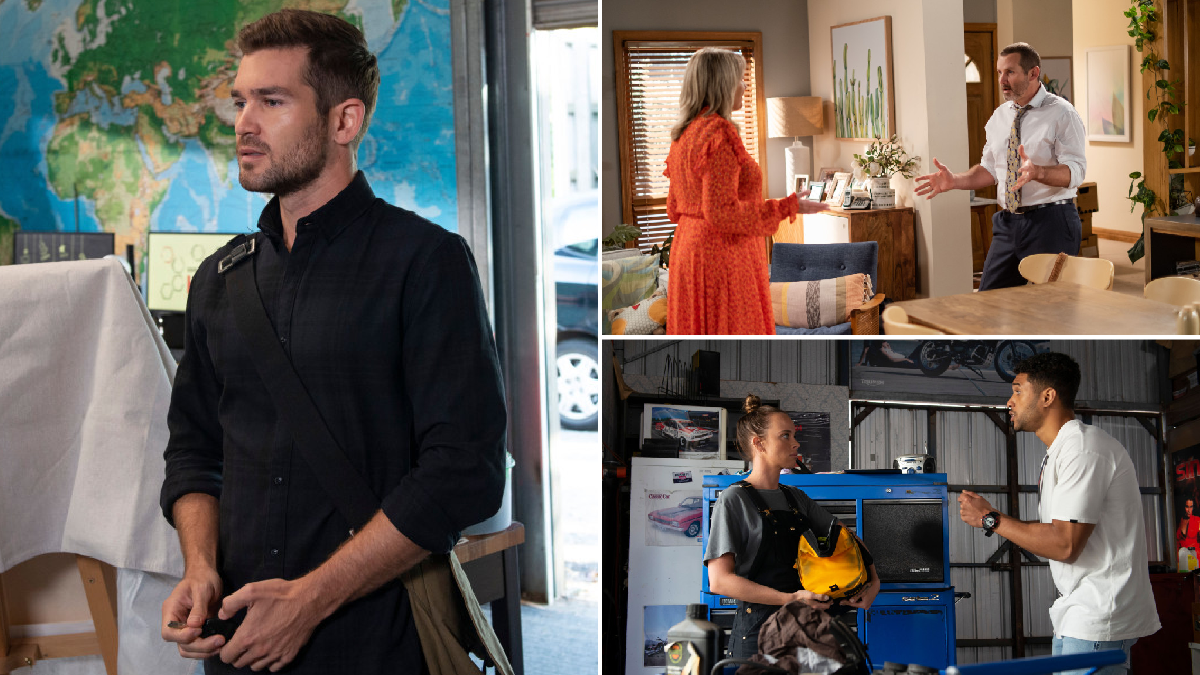 The Neighbours are in for some grief this week, with Toadie (Ryan Moloney) finding himself on the receiving end of some unexpected betrayal, Paul Robinson’s (Stefan Dennis) awful plan to save Harlow (Jemma Donovan) costing someone their freedom, and Bea (Bonnie Anderson) is in for a stark realisation that could affect her relationship. There won’t be many happy campers in Erinsborough.

Toadie (Ryan Moloney) and Melanie (Lucinda Cowden) are just about ready to take the next step in their relationship and go public. Trouble is, someone has already done it for them, and it’s set to cause the loved up couple some serious problems.

Ned (Ben Hall) and Sheila C (Shareema Clanton) find themselves having to fight their feelings in a bid to protect Yashvi (Olivia Junkeer) from what’s really been going on. But how long can they fight them for?

Paul Robinson (Stefan Dennis) tries to backtrack on his awful plan after Terese (Rebekah Elmaloglou) gets wind of it and gives him what for. But it’s too late, the wheels are in motion and there’s no stopping them. Has he just ruined someone else’s life?

Despite the fact Bea (Bonnie Anderson) and Levi (Richie Morris) recently said the L word, she’s now having serious doubts. Does she still see a future with him?

And there’s a surprise in store for Roxy (Zima Anderson) when an unwanted visitor shows up in Erinsborough, and she reacts in true Roxy style to the unwelcome intrusion.

Here’s what’s ahead in Neighbours.

Who is Toadie’s secret saboteur?

Melanie is ready to shout their love from the rooftops which is all super cute, except is by no means ready for that. He’s nervous that they’ll lose their magic once they tell the world what they’ve been up to, plus there’s the added complication of his kids. But the couple have a D&M and he realises that maybe it won’t be such a bad thing that everyone finds out. Unfortunately for him, someone has beaten him to it, and the consequences are pretty dire.

He receives some terrible news – They’ve been dropped from the lucrative Carmelo case. It transpires that they got wind of Toadie and Melanie’s unprofessional dalliances and now feel it totally inappropriate. But how did they find out? This is very bad news for Toadie and could have huge ramifications for his business. Who’s the mole?

Things are heating up for Sheila C and Ned. They’ve been spending so much time together it was only a matter of time before things took a turn. They admit their feelings for each other, but decide they need to push past them and just put a big old mental block on them. Obviously, that’s easier said than done and they’ve basically just lit their own fuse in the count down to their suppressed feelings making an explosive reappearance. Ned starts to panic about what he’ll tell Yashvi. Is their relationship doomed?

Will Bea leave Levi behind?

Sheila C senses Bea has reservations about her relationship with Levi. As Bea explains how Levi saved her in the aftermath of Finn, Sheila C has some groundbreaking news for her – maybe she’s just in a rehab relationship. He makes a romantic gesture that makes her guilty and she realises Sheila C might be right, she needs to have a serious talk with her boyfriend. Has she realised that she doesn’t see Levi in her future?

Paul has set the wheels in motion to completely destroy Brent’s future. Seems a bit extreme, even for him, and all in the name of simply keeping Harlow away from the bad lad. Ned and Terese get wind of what a heinous act Paul has made, and pressure him to go back to Holden to undo the deal. Reluctantly, he does what they ask and tells Holden the deal is off. Naturally, Holden isn’t about to undo his bid for freedom, his story is staying as is and Brent can take the rap.

After Paul’s terrible meddling, Brent tells Harlow he’s joining the Army. Crushed once again, Harlow is forced to say yet another goodbye. Will Paul be super smug that he’s got his way, at the expense of Brent’s future?

Roxy is working her backside off to curry Terese’s favour. But it all might be for nothing when someone makes a surprise return to Erinsborough and puts Roxy’s dream job in jeopardy. Amy makes a flamboyant return ready to take on the world – starting with Lassiters. Roxy is kicked in the gut by the news that Amy has scored the job she so badly wanted.

Terese explains it is because Amy had a superior application and Roxy is devastated, having believed she’d done more than enough. She cries on Chloe’s shoulder, who advises her this is a learning opportunity and that she needs to suck it up. But it’s way more than that, Amy – who has form for stealing other people’s ideas, like the uniform design fiasco – keeps claiming all of Roxy’s ideas as her own. Fed up her hard work is proving for nothing, she decides to take drastic action to get her own back. But will she do herself more harm than good?

It gets worse for Chloe and Aaron

Chloe and Aaron are lulled into a false sense of security when Nicolette has to work and they’re left to practice for the volley ball tournament by themselves. They celebrate not having to deal with drill sergeant Nic, but they count their chickens too soon, as Jane steps in. And as it turns out, she’s psycho coach mark two – even worse than Nic. Are Chloe and Aaron on the verge of throwing in the towel?