Single mother spent just £12.50 on her 18-year-old daughter’s prom by asking an uncle for a ride and bagging a dress for FREE on Facebook – and insists the night ‘shouldn’t be about money’

A thrifty single mum paid for her teenage daughter’s ENTIRE prom night on a budget of just £12.50.

While other mothers have hit the headlines for splashing out thousands on their little darlings’ school leavers events, Debbie Hills, 47, ensured daughter Aimee had a night worthy of a princess – and still had change from a £20 note.

Mother-of-three Debbie was forced to put her pennysaving skills to the test after Aimee, 18, initially refused to attend her prom due to school bullies.

But when the teenager, from Hastings, East Sussex, changed her mind about going to the party just three weeks before the big night, her mum had to scramble everything together ensure she looked the part. 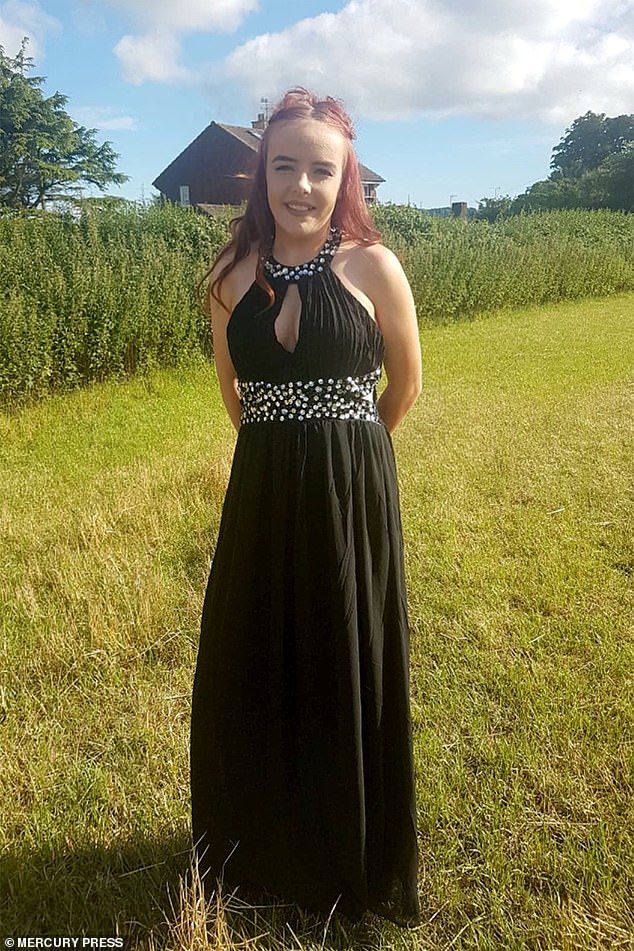 School cook Debbie’s bargain-hunting credentials saw her snaffle a free dress from social media, while she spent just £5 on alterations for the frock and £2.50 on a pair of tights.

Debbie paid £5 for the actual ticket and Aimee was chauffeured to the prom for free by her great uncle Percy in his Jaguar.

Debbie said: ‘Aimee wasn’t very confident – like a typical teenager she had body confidence issues when she’s a size eight.

‘She didn’t have a large friendship group and was bullied at school – she didn’t want to go to school and didn’t really do well in her exams. 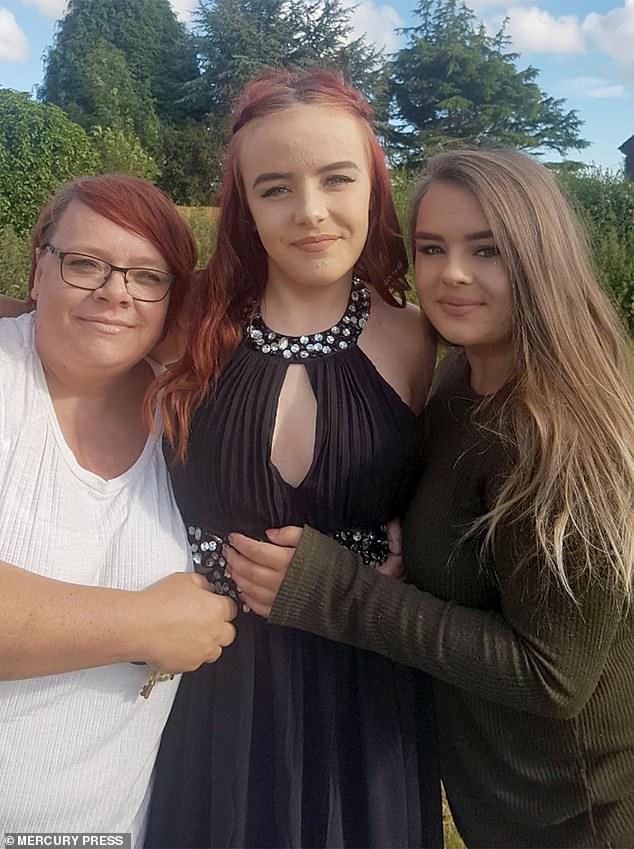 Debbie, left, scrambled everything together ensure Aimee looked the part – while sister Rihannon, right, helped her with her make-up and hair

‘I’m a single mum and I struggle for money anyway, so I had no idea how I was going to do it because dresses cost a fortune.

‘Everyone should go to prom and Aimee’s really glad she went. She has some lovely memories, she would have regretted it if she hadn’t.

‘Prom shouldn’t be about the pressure of money, it should be about the kids spending time together and having memories to look back on.’

Luckily, children’s activity co-ordinator Aimee fell in love with a dress that had been donated by a woman offering it for free on Facebook who said she was sick of seeing people struggle to find the money for prom.

Aimee wore her own shoes and did her own hair and make-up after picking up skills from her make-up artist big sister, Rihannon, 23. 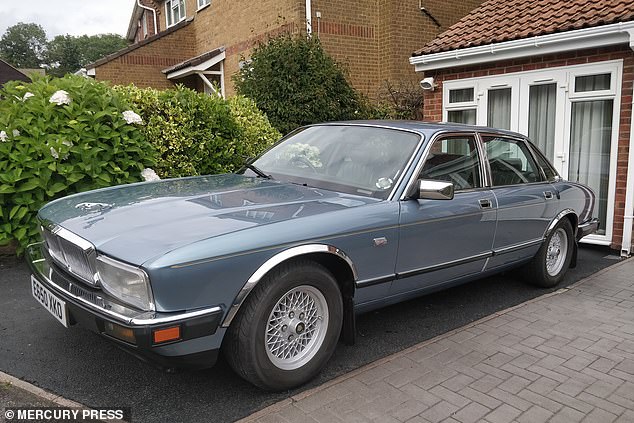 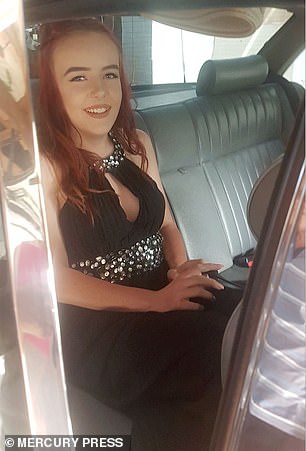 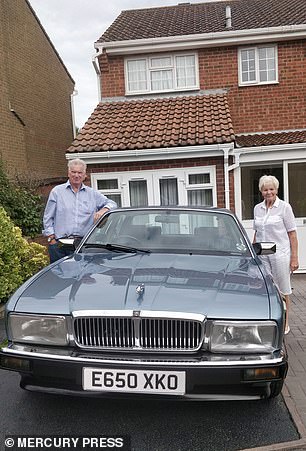 Aimee, pictured left on her way to prom, has some lovely memories from the event. Pictured right: her great uncle Percy and aunty Ann with the Jaguar

Luckily, Debbie had previous experience in organising proms on a budget with Rihannon’s big night costing £24 thanks to a donated dress and the celebrations for son Josh, 20, costing only £55 in total including a new suit, shoes and a bottle of whiskey for a neighbour who dropped him off in his Porsche.

Debbie said: ‘We know that we’re lucky. It is nice to spend a lot on your child’s prom and treat your kids if you can afford it, but we’re more grateful than greedy.

‘We don’t do the whole, “look what I’ve got”. My kids will go into Primark and look for the stuff that costs a pound, they don’t go into Hugo Boss and want a £500 T-shirt.’

Debbie said the prom trip was made more poignant for Aimee after her grandad Simon was diagnosed with cancer in 2018 – just four weeks after her aunty Vicky, 20, was found dead at university. 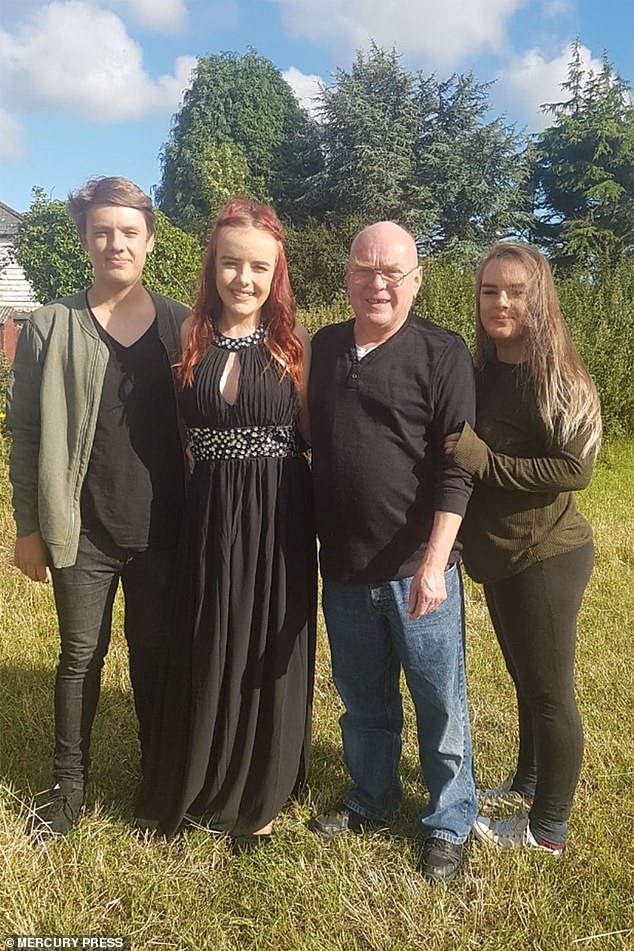 Aimee, pictured with her mum Debbie, sister Rihannon, brother Josh, and grandad Simon, got her dress for free from a lady who advertised it on Facebook 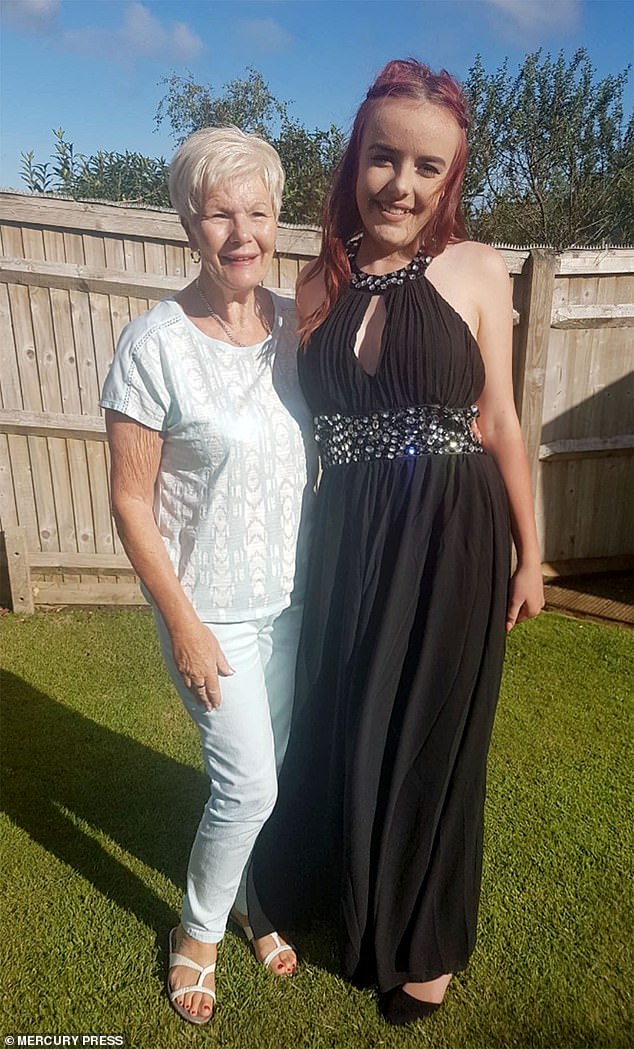 Aimee, pictured with her great aunty Ann, initially refused to attend her prom due to school bullies

Debbie said: ‘Aimee really deserved to go – when my dad was diagnosed with cancer her only priority was making sure she visited him every day and making sure he was eating.

‘Even now, she still visits him twice a week and does things for him. She’s a great kid – she rarely thinks of herself and always wants to help everyone else.’

Aimee’s purple halterneck and diamante studded dress has now been passed on to another school leaver while Rihannon’s was donated to the school.

Debbie said: ‘We’ve passed the dresses on for other people to enjoy.

Debbie had previous experience in organising proms on a budget with Rihannon’s big night costing £24 thanks to a donated dress and the celebrations for son Josh, 20, costing only £55 in total including a new suit, shoes and a bottle of whiskey for a neighbour who dropped him off in his Porsche

‘One of the conditions when we picked up Aimee’s dress was that we weren’t allowed to sell it, but we wouldn’t have done that anyway.

‘We’ve always struggled, and it was nice to be able to do something for families in a similar position.

‘Money is tight for most of the people I know, and most of those are working families.’