Lavishly costumed, with a wealth of comic talent on display, Simon Phillips’ production of Shakespeare In Love is terrific fun. It’s a luxurious and lovely adaptation of the film that swept the Oscars in 1999; you should snap up a ticket while you can.

The work famously sneaks behind the curtain of the golden age of Elizabethan drama, to revel in the tragicomic absurdity of the gulf between art and life.

High romance and refined wit do battle with low humour and coarse motives, in a nimble play that acts as both satire and celebration of a disparity that seems never more pointed, nor more confounding, than in the lives of artists themselves. 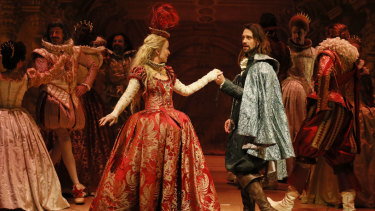 Enter a young Will Shakespeare who’s almost an incarnation of Keats’s quip that “the poet is the least poetic thing in Nature”.

There he sits – a hot mess agonising fatuously over the opening line of Sonnet 18. In fact, Will’s writer’s block fails to lift (it’s an ill-fated Kit Marlowe who suggests the immortal comparison to a summer’s day) until he falls in love with Viola de Lesseps, a theatre-mad lady dressed as a chap, and the whole Shakespearean romp is set in motion.

The wild rom-com Will is writing, and the players are in seat-of-the-pants rehearsal for, gets transmuted into tragedy in the face of a love that cannot last. 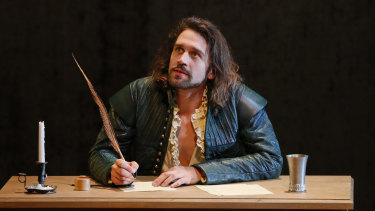 Despite being ruled by a woman, Elizabethan England is profoundly patriarchal. Women are treated as property, ensuring Viola’s fling with Shakespeare will remain just that, and her dream of being a player is an impossible one – women will not be allowed to act on London’s stages for another 60 years.

Yet, for all that, Shakespeare In Love does vindicate the power of theatre. What is dreamt onstage sows the seeds of future possibility, and if Shakespeare’s women had not been drawn with such intelligence, psychological complexity and – though almost always in men’s clothing – such agency, 60 years might have been much longer.

The romantic leads are marvellously cast. Michael Wahr proves a dreamboat Shakespeare and delivers his own verse with a yearning intensity that will set all hearts a-flutter. Opposite him, Claire van der Boom combines radiant presence with intelligence, determination and incandescent feeling for poetry: the sheer unfairness of Viola’s fate looms larger than it did 20 years ago, and the extracts from Romeo and Juliet are more moving than any production of it I can recall.

Luke Arnold’s Kit Marlowe makes an impossibly rakish offsider to the Bard. And the supporting cast assembles many of our finest comic talents. 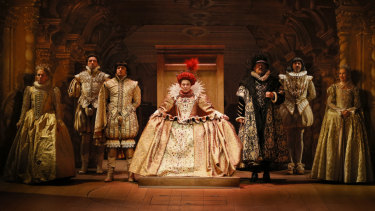 The production is lavishly costumed.Credit:Jeff Busby

Chris Ryan and Aaron Tsindos strut and fret to hilarious effect in a histrionic rivalry between two of the greatest actors of the age. The producers – John Leary as the whiny Henslowe, whose devotion to theatre lands him deeply in debt; Adam Murphy as a penny-pinching creditor seduced by the stage – are perfectly matched.

Peter Houghton and Tyler Coppin are side-splitting as last-minute ring-ins, padding out a rehearsal process that goes pear-shaped in every conceivable way, including the mad antics of a dog (Daisy) who steals every scene she’s in.

Francis Greenslade, Daniel Frederiksen and Aljin Abella are sharp as the villains of the piece. And Deirdre Rubinstein as Queen Elizabeth holds all the trumps in the final hand, filling the stage with formidable costume and authority.

Simon Phillips’ gorgeous-looking production juggles romance and humour with ease, and it’s a real pleasure to see theatre – all its foibles, its shortcomings, its precariousness, and ultimately its glory – delivered with such playfulness and skill.