Post-election protests were held in numerous cities Wednesday, with several spilling into the night. Most were peaceful but some grew tense and even violent. Dozens of arrests were made.

Demands depended on circumstances, with some demonstrators insisting every vote be counted and others that vote counting be stopped.

As votes were being tallied in the critical battleground state of Arizona Wednesday evening, some  members of the extremist group AZ Patriots entered the Maricopa County Recorder’s Office in downtown Phoenix, reports the CBS affiliate there, KPHO-TV. They livestreamed as they did. At least one was wearing a military vest.

They were kicked out of the elections center but lingered in the parking lot. Several apparently had guns. Arizona is an open-carry state. As the crowd grew to hundreds of people, chants of “count every vote” could be heard.

At one point AZ rep Paul Gosar @RepGosar got on the megaphone in front of the protesters.

At the same time, my friend & coworker @KimPowellTV had her life threatened out there by a man who said he would find out where she lives.

Some supporters of Democratic presidential candidate Joe Biden showed up as well, but the crowd overwhelmingly consisted of backers of President Trump.

Maricopa County Sheriff’s deputies in tactical gear stood just outside the building’s entrance, making sure no one came inside. Around 10 p.m., media members were escorted out. Reports that the building would be evacuated and vote counting would stop proved false. 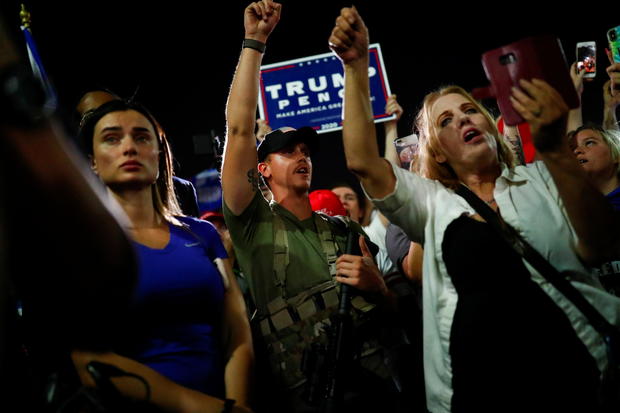 In midtown Manhattan, several hundred people took to the streets Wednesday while chanting “count every vote.” Organizers called it the “Protect the Results” rally. Nighttime aerial video from CBS New York showed a crowd congregating around a fountain area in Washington Square Park.

Several landmarks and businesses in New York City remained boarded up as they braced for any potential looting or unrest, according to CBS New York. The city had significant looting after the death of George Floyd in Minneapolis in May.

The New York Police Department said Wednesday night that officers arrested dozens of people who allegedly tried to “hijack” a peaceful protest in Manhattan by lighting fires and throwing garbage and eggs. Another NYPD tweet said officers confiscated weapons, including a stun gun and daggers. Police said several officers were injured, according to CBS New York. No additional information about the injured officers was immediately available.

Authorities said at least nine people were arrested in Portland, Oregon, after two groups of protesters converged in the downtown area, with some of them throwing objects — including a Molotov cocktail and glass bottles — at law enforcement, CBS Portland affiliate KOIN-TV reported. The Multnomah County Sheriff’s Office said the Oregon National Guard was activated to help local authorities due to the widespread violence.

Oregon State Police said there were confirmed reports of vandalism, including broken windows and graffiti. Authorities added that they seized commercial-grade fireworks, hammers and spray paint, and one person arrested had a rifle, according to the TV station.

Several arrests were made at a protest in Denver, police there said. At least three people were arrested at a Seattle protest.

Arrests were also made in Minneapolis as hundreds of demonstrators marched to protest the election as well as racism, CBS Minnesota reported. Protesters converged on Interstate 94, causing a traffic backup.

At one point, authorities estimated that some 200 protesters were on the interstate. Law enforcement officials told them to sit down and prepare to be arrested, while drivers were told to turn off their vehicles, according to the TV station.

In Philadelphia, protesters in a rally as well as people protesting the fatal police shooting of Walter Wallace Jr. merged into one group in Center City, CBS Philadelphia reported. Demonstrators were seen carrying a large sign that read “count every vote.”

After lawyers for the Trump campaign announced they’d filed lawsuits to contest ballot counting in Pennsylvania and other states, protesters marched outside Philadelphia City Hall, calling on officials to count every vote. 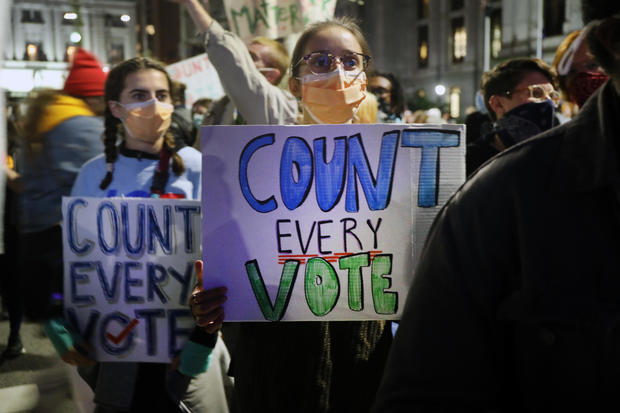 In Chicago, protesters who worried that President Trump would stop the counting of remaining votes in battleground states marched through the downtown area as part of a “Defend the Election” rally, CBS Chicago reported. The group marched along downtown streets before surrounding Trump Tower. While arrests were reported in other major cities, police said the demonstration in Chicago was peaceful.

And in Detroit, tense moments played out outside the TCF Center, where Michigan absentee votes were being counted. Crowds were caught on video chanting “stop the count,” while some challengers said they were upset they weren’t being allowed inside.

Michigan’s secretary of state, Jocelyn Benson, told CBSN this appeared to be “designed simply to drive a narrative, a false narrative that the process is anything other than open and completely secure.”

“There are plenty of representatives and challengers as there have been throughout this process inside TCF Center, watching the process, observing the process,” said Benson. “We’ve been very clear that as soon as someone became disruptive, they would have to leave. We’ve had actually very little examples of that.”