Seven fan favourites McDonald's scrapped from the menu from chicken legend to McBites – could they make a comeback?

MCDONALD'S is a fast food chain that's a firm family favourite in many households, and every member usually has their go-to order.

Over the years though products have come and go, and in some cases fans have been left up in arms about the decision to scrap certain goodies. 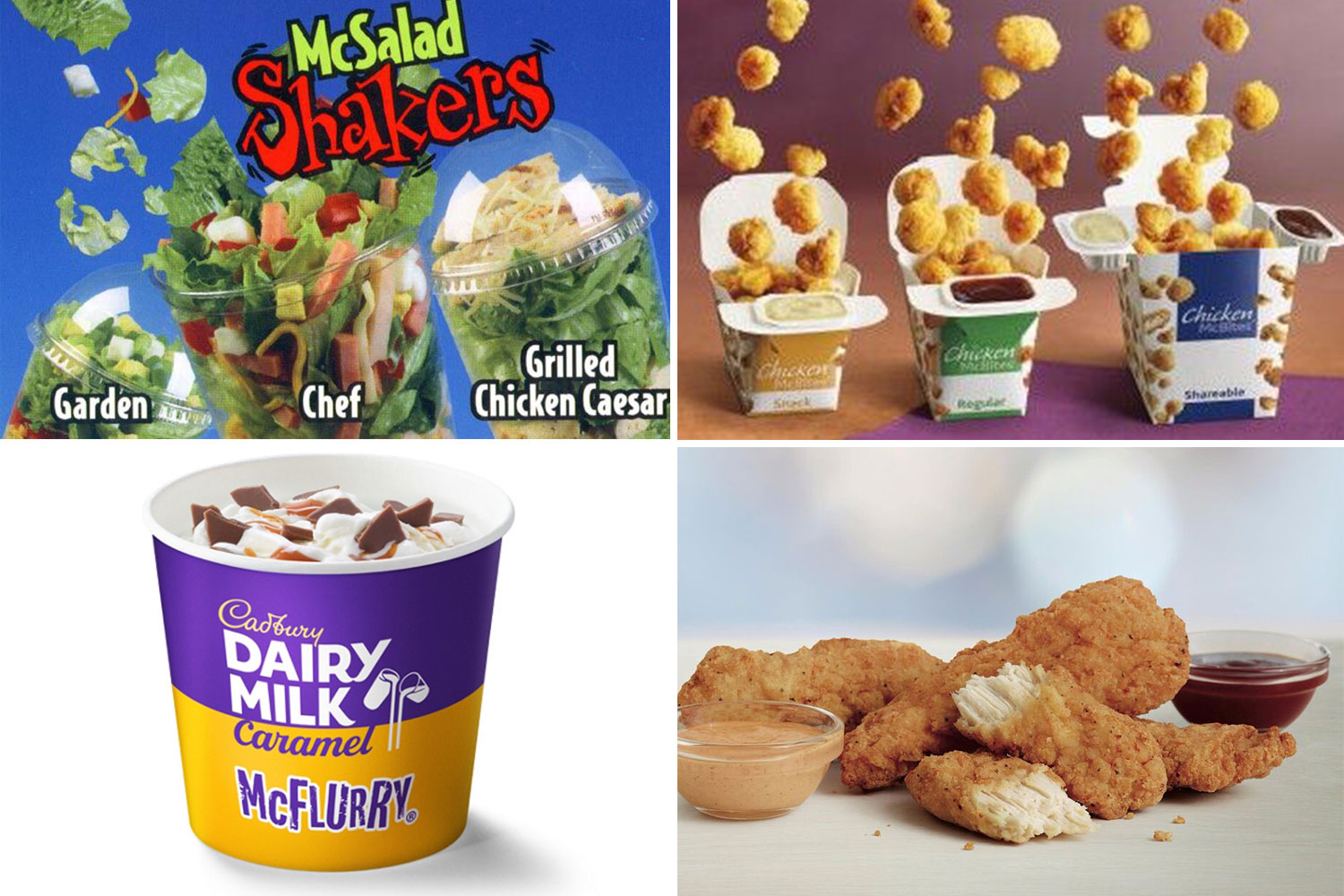 It was later revealed that the reason to scrap the fan favourite was down to supply issues, but it still left many distraught.

Twitter is where the Maccies "police" go to air their opinions on the subject, with the majority eager for their own favourites to make a comeback.

One user said "McDonald’s got rid of chicken legend what a dumb decision."

But it's not the only one to hit the chopping block of menu items.

A whole number of other limited edition or simply unsuccessful meals have hit restaurants only to disappear just as quickly.

We won't know for sure if McDonald's will ever bring back any of these loved options, but it is forever coming up with new seasonal treats that are sure to occupy fans for the meantime.

While you wait for the new goodies to hit the order counter, take a trip down memory lane of these discontinued snacks from the fast food giant.

Chicken McBites were a menu item at McDonald's that were a bit like nuggets, but smaller.

If anything they were closer to resembling KFC's popcorn chicken.

They were a firm favourite back in 2012 alongside its counterpart, Fish McBites.

Both came in 3-ounce, 5-ounce and 10-ounce versions but were discontinued in late March 2013.

McSalad Shakers were the controversial healthy option introduced by McDonald's.

Designed to look a bit like a milkshake but with green offerings inside, the discontinued meal came in three meal choices.

There was Chef, Grilled Chicken Caesar and Garden.

You could also get your hands on the Garden McSalad Shaker which used to contain a green salad mix, a cheddar and jack cheese blend, chopped eggs, chopped tomato and green onions.

Buttermilk Crispy Chicken Tenders which were better known as Chicken McTenders, were chicken strips sold mostly in the USA.

But they did make their way over to the UK briefly as they featured on the "Pound Saver Menu" for a short while.

That menuoffers various menu items for just £0.99, so they were a delicious alternative as well as being a bargain.

Sadly they're gone now, but we do have the joy of chicken selects at our disposal.

Many fans agree that the selects are a great staple on the menu currently due to their original flavour, so they're not too sad to see the tenders disappear.

Back when McDonald's was running its Monopoly promotion you could get the dairy milk caramel McFlurry.

The staple Maccies dessert option was soft dairy ice cream swirled with crushed dairy milk chocolate and caramel just like the Cadbury's chocolate you could pick up from the corner shop.

McDonald's will often rotate its McFlurry flavours so there's nothing to say the ice cream won't make a comeback of its own but we'll have to wait and see to find out.

There even used to be a Strawberry cheesecake flavour too, which according to the Daily Star is in fact still available to buy in some variation from McDonald's Singapore.

At the moment you can pick up the smarties, oreo, crunchi and malteser options though.

Another one gone but not forgotten by Cadburys fans, the fast-food giant used to do a caramel flavoured milkshake.

Of course now you can only get the standard banana, chocolate or strawberry flavours.

But it wasn't that long ago that many milkshake lovers had to miss out entirely as McDonald's suffered a major shortage of the dairy beverages.

This year it does have some festive themed hot drinks to add to its menu though including a delicious sounding choco fudge latte that's sure to satisfy sweet toothed fans for the time being.

Ever since the pandemic the breakfast menu has been very limited.

Though it did bring out the new breakfast rolls, old favourites like the breakfast wrap were sorely missed.

You used to be able to get a pork sausage patty with free-range egg, bacon, a potato rosti and cheese, in a soft tortilla wrap, with either brown sauce or ketchup.

But there's no option like this on the menu now.

Some fans simply said the new choice just doesn't cut it when compared to the options from before.

One on Twitter said: "I was so excited to get a McDonald's breakfast this morning then I remembered they got rid of all the good breakfast options. The big breakfast and the breakfast wraps were lit.

"The cheesy bacon flatbread is ridiculously dry and salty and the McMuffins are horrendously greasy. Ended up having a Tesco café breakfast. Was unreal."