SARAH VINE: Is it time for the Queen to step back from duties?

SARAH VINE: Painful as it may be to contemplate, is it time for the Queen to step back from duties?

Watching the Queen greet the Sultan of Oman at Windsor Castle last week, I was struck by how small she seemed.

She still looked fabulous, of course, but her clothes hung a little loose. And that cloud of white hair, the white dress, those eyes the colour of blue sky, made her a touch too ethereal for my liking.

For some reason the sight of her – so slight, so vulnerable – touched me deeply. It brought home that she is not, very sadly, immortal.

The Queen pictured in 2019. She remains on ‘light duties’ – hence last week’s meet-and-greet with the Sultan of Oman

This is a painful notion, and I suspect I am not alone in contemplating it.

As well as being Queen, Elizabeth II is also the nation’s great matriarch, a woman who for many years has watched over this country with the compassion and dedication of a parent, offering us her unconditional love, as mothers do.

She has been there in every crisis, a solid point of reference, her calm presence soothing our fevered brows, offering encouragement and support.

There is virtually no one in Britain today who does not know her as Queen. She is the one public figure who unites us all, royalist or republican, the one immutable presence in all our lives.

The idea of a Britain without her is something many of us barely dare acknowledge. Even the thought of it feels like blasphemy, a betrayal of everything she has done for us. 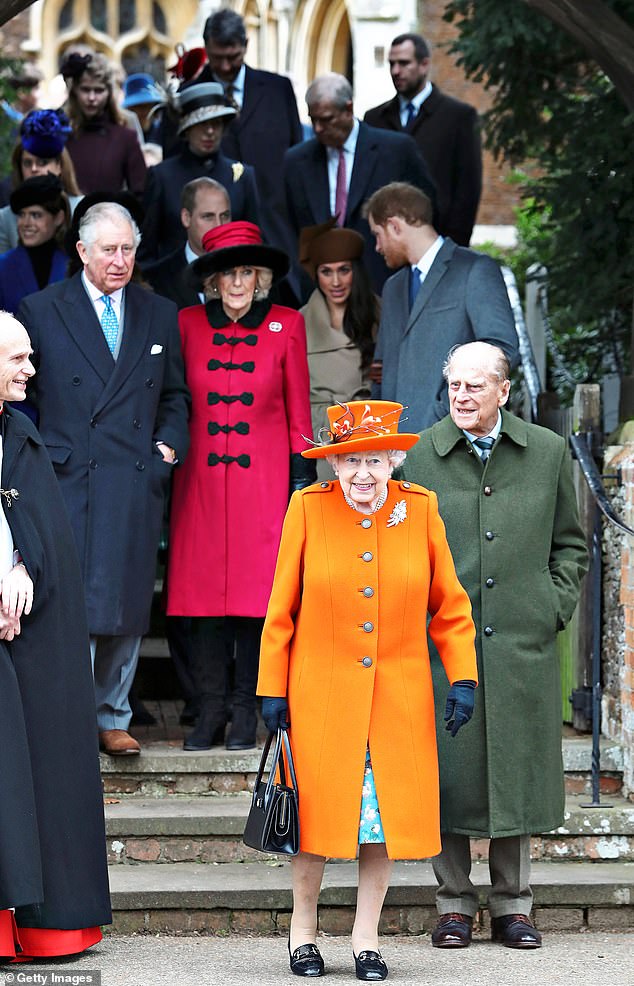 The Queen and Prince Philip in front of Prince Charles and Camilla, Duchess of Cornwall and Meghan Markle and Prince Harry as they attend a Christmas Day Church service in 2017

And yet acknowledge it we must. Elizabeth II is in remarkably good shape for her age, particularly since she’s barely had a day off in 70 years.

But she is nevertheless 95. And even if she lives for the best part of another decade – which theoretically she might (after all, her mother was almost 102 when she died in 2002, and medical science has improved markedly since) – there is, sadly, no getting away from the fact that she is not indestructible.

Those around her are acutely conscious of her vulnerability. Hence the cancellation of this week’s traditional Christmas lunch for extended Royals – usually around 50 in total – that was to have taken place at Windsor Castle.

And there are questions now about Christmas Day itself at Sandringham. Having spent last Christmas at Windsor Castle, she may find herself doing the same this year.

Except this time without even her beloved late husband, Prince Philip, for company.

Despite all this, she remains on ‘light duties’ – hence last week’s meet-and-greet with the Sultan of Oman.

And it’s this I really don’t understand. If she’s not well enough to see her grandchildren, then surely she shouldn’t be shaking hands with dignitaries, however important? Or however much she feels she ought to?

There has never been any question about the Queen’s dedication to the nation, or her incredible work ethic.

But she is not the only one in the Royal Family capable of doing the heavy lifting.

Surely now is the time for the Palace to think the previously unthinkable and contemplate handing over her official duties to Prince Charles. 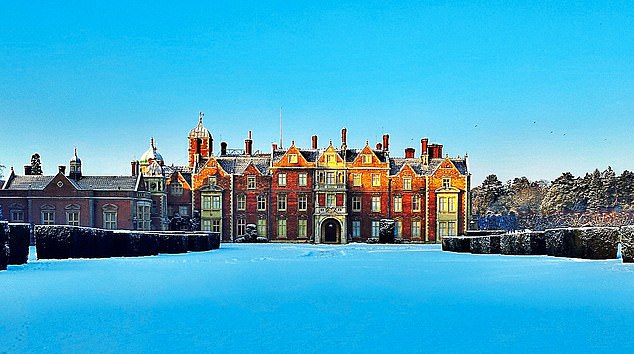 Sandringham pictured in a file photo. The Queen spent last Christmas at Windsor Castle, and she may find herself doing the same this year

No doubt there would be a million objections. It probably breaches endless obscure Royal traditions.

But then again, so does having a Monarch who is still working full-time at the age of 95. Fact is, we are in uncharted territory here.

And, quite honestly, if the price of having her around a few years longer is getting her to put her feet up and spend more time doing the things she loves – riding, walking, whizzing around at the wheel of her Land Rover – and less time being run ragged by her diary, then who could really object?

Meanwhile, Charles could assume her mantle under her watchful eye, which probably wouldn’t be such a bad idea anyway.

Of course, it may well be that she doesn’t want to. As any of us who has ever watched a parent grow old knows, accepting the limitations of age can be very hard indeed.

But life is what it is, and there are some things you just can’t deny. No matter how much you wish you could. Out shopping the other day, my daughter was asked to show proof of ID. The reason? She wanted to buy some false eyelashes.

That’s right: if you are under 18 you can’t buy a pair of falsies – or at least you can’t in TK Maxx. Something to do with the glue, apparently.

So here’s the thing: we won’t let kids buy false eyelashes because we think a microscopic tube of lash glue might be too damaging for their brains, but we will let them watch explicit, abusive and often violent sex acts that at best will shatter their innocence, at worst leave them traumatised and unable to establish healthy relationships later in life.

And we wonder why they’re all so screwed up.

Guess what was the third most watched TV show of 2021? Boris Johnson announcing a new lockdown on January 4. Just about sums up this whole miserable year.

Whatever next, a rising of the apes?

Astonishing reports of monkey attacks on dogs in India. We’re told the primates have killed up to 250 canines, including puppies, by throwing them off trees and buildings as ‘revenge’ for the dogs attacking one of their own. The monkeys have even been going after schoolchildren. That’s all we need on top of Covid: some terrible Planet Of The Apes-style uprising.

Now Britain’s top civil servant, Simon Case, falls victim to Christmas Partygate. It seems he ‘walked past’ a virtual quiz involving six colleagues having a beer and some snacks at their desks. Six more were at home. I understand people’s anger at the idea that rules were being broken, and of course it’s right that allegations are investigated. But ‘walking past’? It’s like the Salem witch trials – but with peanuts and Pilsner.

Simon Case, who has stepped down from his role in the Number 10 Christmas party probe, pictured in April earlier this year

The Antiques Roadshow has been told to ‘decolonise’ – or address the legacy of colonialism through featured objects – by an Oxford archaeology professor. Surely the whole point of the show is to see the expressions on the faces of the punters when they find out Auntie Betty’s old brooch is actually a Russian royal heirloom, or the priceless vase they bought at auction is a cheap replica. Let’s not spoil it with a lecture.

George Osborne always made balancing the books at the Treasury look like a walk in the park. Judging by recent pictures of him juggling dog and baby in his native Notting Hill, late-onset parenthood is proving rather more of a challenge.

With even Professor Lockdown himself, Neil Ferguson, saying most people infected with Omicron in the UK won’t get seriously ill, you do wonder why Sadiq Khan decided yesterday to ‘declare a major incident’ in London over rising infection numbers. Far too many politicians and experts love the power and self-importance this virus gives them. And we all know how they hate to give it up…

That’s definitely not a cracker of a top, Kate…

The Duchess of Cambridge rarely puts a foot wrong. But even by the normally lax rules of Christmas jumper dressing, that red Miu Miu cashmere cardigan with Peter Pan collar, pearl buttons and rose pattern she wore for her Westminster Abbey carol concert is hideous. The fact it has a price tag of £1,350 only makes it more so. 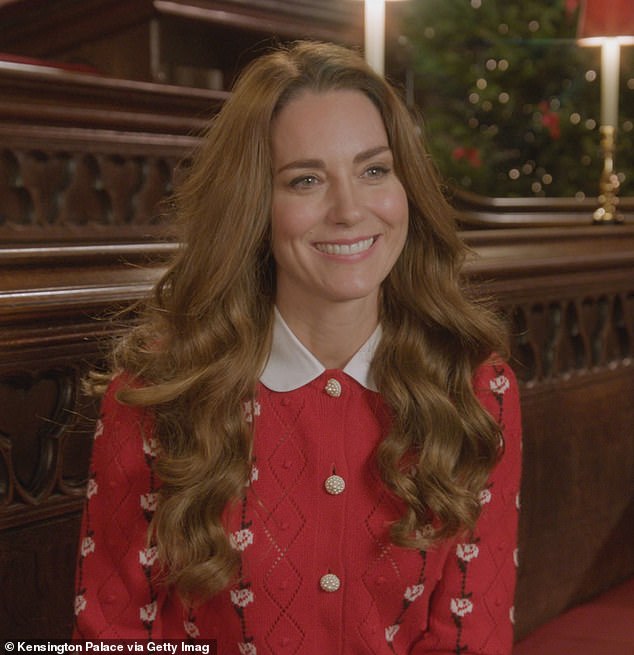 The Duchess of Cambridge’s red Miu Miu cashmere cardigan with a Peter Pan collar and pearl buttons has a price tag of £1,350

Fair enough, the Tories deserved their wake-up call in the North Shropshire by-election. That said, whoever thought it would be a good idea to get newly elected MP Helen Morgan to pop a giant blue balloon inscribed with the words ‘Boris’ Bubble’ is not exactly a political genius. Makes the PM’s recent references to Peppa Pig sound like Cicero.

Intrigued to read that, according to Which? the ‘gadget of the year’ is a £70 soup maker. Really? In my house a soup maker is just an ordinary saucepan.

Oh, here we go: Wayne Couzens, the police officer who murdered Sarah Everard, has been given permission to appeal his whole-life sentence. Why? There is no question of his guilt, even less question that what he did was beyond words. Sarah won’t ever get a second chance. Nor should he.