Robbie McCauley, a performance artist, writer and director who often put race at the center of plays and other works that sought to alter perspectives and foster dialogue, died on Thursday in Silver Spring, Md., where she had been living with her sister, Anita Henderson. She was 78.

Her family said the cause was congestive heart failure.

Ms. McCauley’s résumé included reimagining classic American plays through diverse casting and a stint in the ensemble of Ntozake Shange’s groundbreaking 1976 Broadway show, “For Colored Girls Who Have Considered Suicide / When the Rainbow Is Enuf.” But she was best known for shows she wrote and performed at venues like the Kitchen in Manhattan and Franklin Furnace in Brooklyn, in which she used her family and personal stories to confront universal issues.

“My Father and the Wars,” first performed in the mid-1980s, drew on her father’s time in the military, and on her relationship with him. “Sugar,” one of her most recent pieces, used her experience as a diabetic — she would take an insulin shot onstage — to examine the history and racial aspects of the disease, as well as Black people’s long distrust of the medical system.

Her most famous, and probably most searing, work was “Sally’s Rape,” whose title refers to her great-great-grandmother. The piece, first performed at P.S. 122 in New York, began with Ms. McCauley and her performing partner, Jeannie Hutchins, a white woman, exchanging thoughts on race, their upbringings and other subjects, then built to an unsettling scene in which Ms. McCauley stood naked on an auction block while Ms. Hutchins goaded the audience into joining in the auctioneer’s slave-auction chant “Bid ’em in” — effectively turning the tables on the audience, especially its white members, confronting them with the discomfort of history. 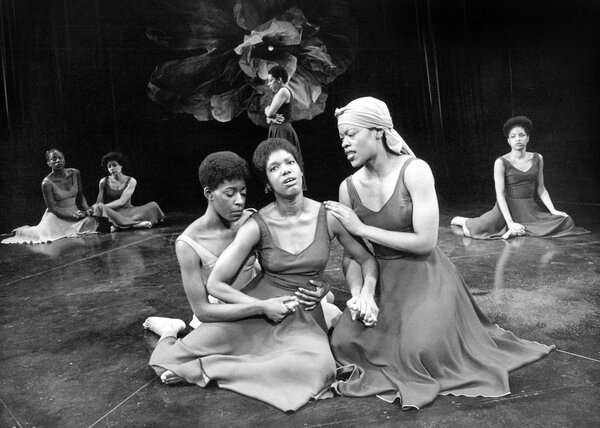 “Robbie McCauley was the bravest artist I ever met,” the theater artist Daniel Alexander Jones said by email. “Her practice was to enter highly charged spaces, take hold of third-rail subjects, breathe deeply, and then speak the seemingly unutterable in public. She often said to me, ‘Find a way to house the contradictions rather than resolve them.’”

And yet even in a work as uncompromising as “Sally’s Rape” Ms. McCauley was most interested in fostering dialogue, especially about subjects that people didn’t want to talk about.

“Her work was all about getting past that,” the writer Cynthia Carr, a longtime friend, said in a phone interview. “It wasn’t about judging so much as, ‘Let’s talk about this and let’s get the truth out there.’”

Ms. Carr had firsthand experience with the McCauley doctrine. She said Ms. McCauley may have been the first person she told a secret that she had harbored since learning it as a teenager: that a grandfather of hers had been a member of the Ku Klux Klan in Indiana. She had been reluctant to share such a thing with anyone, especially a Black friend, Ms. Carr said, but Ms. McCauley welcomed the revelation when they finally had the conversation in the early 1990s.

“Robbie said to me, ‘Those are the stories we need to hear that white people aren’t telling,’” she recalled.

Ms. Carr, who wrote about the exchange with Ms. McCauley in her 2007 book, “Our Town: A Heartland Lynching, a Haunted Town, and the Hidden History of White America,” said the lesson was clear.

“It’s like any relationship,” she said. “If you keep things hidden, there’s only so far you can go.”

Robbie Doris McCauley was born on July 14, 1942, in Norfolk, Va. Her father, Robert, was a career military man, and her mother, Alice (Borders) McCauley, was a federal employee.

She received a bachelor’s degree from Howard University in 1963 and later a master’s from New York University. She had made her way to New York after graduating from Howard, finding work with the Negro Ensemble Company and in avant-garde theater. Appearing in “For Colored Girls,” she said, pushed her to start telling her own stories.

In the late 1980s she joined with Laurie Carlos (another “For Colored Girls” alumna) and Jessica Hagedorn to form Thought Music, a performance-art group. Their work included “Teenytown,” presented at Franklin Furnace in 1988. It looked at race in popular culture through the format of a fast-paced minstrel show.

“I think what I most admired about her as an artist was her honesty and fearlessness and courage,” Ms. Hagedorn said of Ms. McCauley in a phone interview. “Her willingness to take a risk.”

Many of the racial themes she was broaching 30 years ago anticipated today’s race-related debates.

“She was so ahead of it,” Ms. Hagedorn said.

Ms. McCauley also helped people find and tell their own stories. In 1990 she wrote and directed “The Buffalo Project,” working with local residents and artists in Buffalo to create a site-specific performance that revisited that city’s race-related riots in 1967. In a series of multimedia performances produced by the Arts Company from 1990 to 1994, she worked with residents in Mississippi, Los Angeles and Boston to examine the history of voting rights, desegregation, the Black Panthers and other subjects.

“She believed in people’s capacity for liberation,” Mr. Jones said, “and knew her gift as a performer was to demonstrate in real time that we can in fact face traumatic histories, move testimonies through our bodies, and remember our whole being in community with others. Our nation is starving for the kinds of courageous conversation that Robbie and her work engendered.”

Ms. McCauley taught at various colleges over the years, including Emerson College in Boston from 2001 until her retirement in 2013.

At nearby Roxbury Community College some 15 years ago, she and Marshall Hughes reimagined American classics. Reginald Rose’s “Twelve Angry Men” became “Twelve Angry Jurors,” with the jurors no longer all being white men. Tennessee Williams’s “A Streetcar Named Desire” took on new elements of race and class when the Stanley Kowalski character was played by a Black actor. “The Crucible,” Arthur Miller’s play about the Salem witch trials, was staged to emphasize the character of Tituba, a slave from Barbados.

“We are not reinterpreting the play,” she told The Boston Banner in 2007, when “The Crucible” was staged. “We are looking for larger possibilities by extending our imaginations.”

Ms. McCauley married Edward Montgomery in 1979. Though they divorced in 1996, they remained close. In addition to her sister, she is survived by her daughter, the composer Jessie Montgomery.

Ms. McCauley had in recent years been performing “Sugar,” the play about diabetes, in the hope of promoting the sort of dialogue about the disease that she had fostered about race with her earlier works.

“Many, many people know diabetics, but we’re talking about breaking the silence,” she wrote in The Boston Globe in 2013. “Many people appreciate being let in on a process that even their relatives may not have shared with them.”

Years earlier, in a 1999 interview with The Hartford Courant, she had spoken about her goals with all of her works.

“My basic hope is simple,” she said. “It’s that people might be able to have a good time with material that’s charged and uncomfortable.”