Melburnians could be back in pubs and restaurants by the end of next week as Victoria powers towards its 70 per cent double-dose vaccination target several days ahead of schedule.

Chief Health Officer Brett Sutton said if the threshold was met early, he was open to triggering the exit from lockdown sooner than the projected date of Monday, October 26 that was outlined in the reopening road map.

At that point, hospitality venues will reopen for outdoor service, the 9pm curfew will be dropped, hairdressers can operate again and outdoor retail will be permitted.

Government forecasts suggest the state will reach the milestone next Friday or Saturday if vaccination rates continue as expected, as Professor Sutton also expressed “cautious optimism” that Victoria’s case numbers had passed their peak.

“There’s some flexibility [on the road map] depending on how quickly we … get at or around that 70 per cent double-dose mark,” the Chief Health Officer said as the state hit 60 per cent full vaccination on Tuesday.

“If we move there faster, there’s obviously consideration of having public health directions kick in a little bit earlier, potentially.”

The Australian Hotels Association warned many venues might be unable or choose not to open at the 70 per cent double dose mark given the strict limit of 50 fully vaccinated patrons seated outdoors. Some industry confusion also remains over vaccination requirements for workers.

The association’s Victorian president, David Canny, said pubs were more excited about taking one step closer to the 80 per cent threshold, when up to 150 fully vaccinated customers will be allowed indoors and 500 outdoors.

“A lot of sites will be asking: how do you open with no inside trade? We welcome that the timelines are flexible but without a focus on density limits it hardly seems worthwhile,” he said.

Opposition Leader Matthew Guy called for the Victorian government to replicate NSW’s settings at 70 per cent double-dose coverage, under which hospitality venues can host one person per four square metres indoors and per two square metres outdoors. 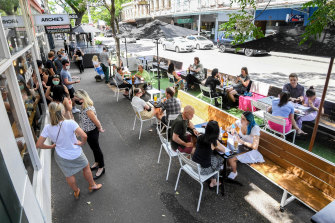 Outdoor dining and drinking could return in time for the weekend starting October 23.Credit:Joe Armao

NSW’s new Premier Dominic Perrottet also lifted home gatherings to 10, a number only allowed in Victoria at the 80 per cent double-dose threshold.

“I think the government is being too conservative in not giving enough back to Victorians,” the Liberals leader said.

In order to reopen, Victoria’s road map outlines that both workers and patrons at hospitality venues must be fully vaccinated. However, the state’s authorised worker mandate, which includes pubs and restaurants, requires one dose by October 15 and two by November 26.

Mr Canny said his understanding was that the latter applied to hospitality workers, meaning they would only require one dose if venues reopen next weekend.

However, Professor Sutton said his “expectation” was workers would need to be fully vaccinated and that would be outlined in public health directions when the new rules come into effect.

Tuesday’s 1466 cases marked a decrease in the seven-day case average for the first time since Victoria’s third wave began in early August.

With 527 cases in Melbourne’s north and 363 in the south-east, Professor Sutton said he was “cautiously optimistic” new infections were plateauing but warned a spike in hospitalisations would occur two to three weeks after the peak in cases.

The Burnet Institute modelling that informed the government’s road map predicted a seven-day average of between 1400 and 2900 cases in the last fortnight of October, followed by a peak in hospitalisations of between 1200 and 2500. There were 675 Victorians in hospital with COVID-19 on Tuesday.

“The case numbers have been actual at or around the modelling, maybe on the high side,” Professor Sutton said. “The hospitalisation is a little bit under modelling predictions. And maybe that’s because it [underestimated] really how protective that single dose, that first dose coverage was, which Victoria really pushed.”

Epidemiologists agreed there were now promising signs Victoria’s third wave has peaked, but cautioned it may be too early to be “uncorking the champagne”.

Adrian Esterman, a professor of biostatistics at the University of South Australia, said there was a risk it was a “false peak” and he would like numbers to continue to decline for the rest of the week before he could say that the worst of the current outbreak was probably over.

Professor Esterman said the effective reproduction number had dropped to 1.1, which means that 10 people with the virus only pass it on to another 11 people, on average. It’s the lowest this number has fallen since August 29, according to Professor Esterman.

World Health Organisation expert adviser Mary-Louise McLaws said as long as the state avoids further mass breaches of compliance similar to what occurred on the AFL grand final weekend, Saturday’s record of 1965 coronavirus cases could be as bad as it gets, at least ahead of the reopening.

In response to rising hospitalisations, Health Minister Martin Foley said some non-urgent care would be progressively switched off as outlined in the road map.

Despite 675 patients in Victorian hospitals – putting extraordinary and record strain on the health system – the number of people falling seriously ill has not been growing as fast as infections, even taking into account the lag between people getting the virus and getting sick, according to Professor Esterman.

He attributed this to the fact that more younger Victorians were getting infected, who are less likely to get seriously unwell compared to older people. Almost 70 per cent of the state’s active cases are in their thirties or younger.

Stay across the most crucial developments related to the pandemic with the Coronavirus Update. Sign up to receive the weekly newsletter.