Astrology: Expert explains what your star sign means about you

Prince Charles’ first marriage to Diana, Princess of Wales ended in divorce in 1996. However, the Prince of Wales went on to marry a woman with the exact same star sign in 2005. Camilla was born on July 17, making her a Cancer, just like the late Princess Diana who was born on July 1.

Inbaal Honigman, a professional psychic and astrologer, spoke exclusively to Express.co.uk to explain why Charles was drawn to Cancers.

She said: “Prince Charles married two women in his life, and both happen to be Cancerians. Cancer is known as a sign that loves family life, stability and peace.

“Cancerians tend to enjoy a quiet life, surrounded by their closest friends and relatives. Their joy comes not from achievement or attainment, but from simply living and loving.

“Princess Diana was born on July 1, 1961. Her Moon sign is humanitarian Aquarius and her Ascendant is free-spirited Sagittarius. 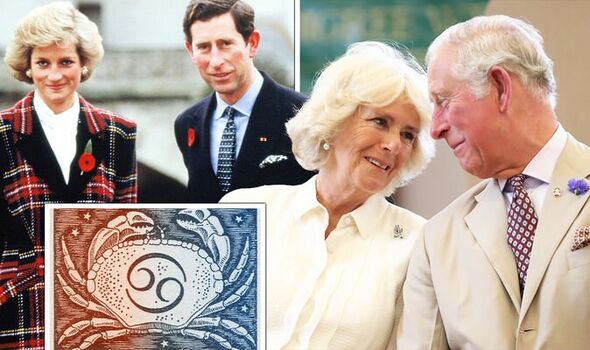 “Camilla was born on July 17, 1947. Her Moon sign is also Cancer, making her a ‘double cancer’, whereas her Ascendant is Leo.”

Inbaal asked: “Is forming relationships with the same sign common? Do people have a particular Zodiacal ‘type’, similar to a physical type? Or is it an accidental quirk?”

The expert suggested: “It’s hard to know whether a person would choose the same sign again and again, because most people don’t marry more than once or twice, which is hardly a sweeping scientific experiment. But star sign compatibility is very real.

“Prince Charles himself is a Scorpio. This is a very passionate and driven sign that operates from the heart, and is determined to get things done.

“Such a focused personality may struggle with a partner who is very driven themselves, such as Capricorn or Leo, whereas easy going Cancerians are happy to let the Scorpio lead.”

What are Charles’ Moon and Ascending signs?

Inbaal added: “His Moon is in Taurus, which is a very steadfast sign, and hates interruptions. Cancerian’s soft approach, again, is a good match.

“The pleasant side of Taurus is their elegance and homeliness, which fits very well with the Cancer.

“Charles’s ascendant is Leo, which shows that he likes to have the upper hand. Leo is a proud and powerful sign.”

How would Diana or Camilla’s Moon and Ascending signs help for compatibility with Prince Charles?

The expert claimed: “Diana’s Sagittarius ascendant would have compelled her towards personal freedom, creativity and expression. Those two astrological placements aren’t an easy match.

“Even though she shares her ascendant with Prince Charles, this won’t necessarily suggest compatibility, because both Leo ascendants want to take the lead.

“As people grow and mature, they change. Each person ‘grows into’ their star sign.

“Whereas as a young Scorpio, the Prince may have embodied the more impulsive elements of his Scorpio sign, and chose to react rather than listen in his first marriage, he was more mature in his second marriage.

“An older Scorpio will mellow out a lot, and feel more aligned with the accepting, non-judgmental elements of this sign, and bring this into the later marriage.”