Princess Charlene at the Monte-Carlo TV Festival in June

Princess Charlene of Monaco has been photographed alongside her husband, Prince Albert, and their two children Princess Gabriella and Prince Jacques. Express.co.uk spoke to body language expert Judi James about the image, and what signals Princess Charlene was trying to portray.

The caption that accompanied the carousel read: “Hereditary Prince Jacques and Princess Gabriella received their ‘Seadventures Summer Camp’ diploma this afternoon at the end of their week of training to discover sailing and raise awareness of the marine world organized by the Yacht Club of Monaco.

“The previous week, the princely children had taken part in an introductory course in diving and water rescue at the Monegasque sea academy, the blue school.”

The first image showed Princess Charlene, Prince Albert and their two children posing for a photo with their medals. 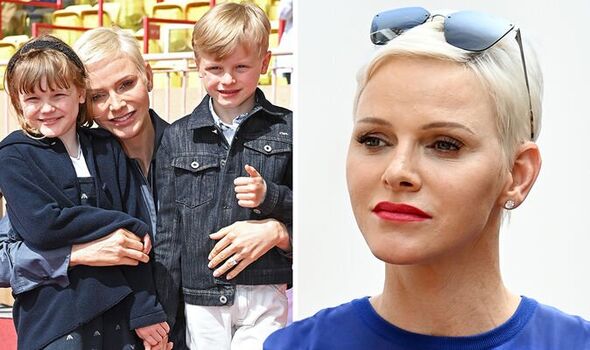 Both parents had their hands on their children’s arms and look like a united family of four.

Judi looked at this image closely and provided her analysis of the Princess’ body language.

The expert suggested: “This is an awkward and contrived pose for the cameras rather than a natural family grouping.

“But it does appear to throw up several ‘intentional gestures’ or signals that suggest Charlene is feeling stronger and that the family is still on track or at least wanting to be seen as so.”

She explained: “Charlene and Albert stand together behind their children in a very evenly-balanced and mirrored pose.

“Charlene is very slightly to the front here and she is leaning into her husband, suggesting a relaxed desire for proximity, in contrast to some of her more overkill displays in South Africa.

“There is still an air of sadness in her facial expression but she has also made the decision to, unusually, wear deep red lipstick. 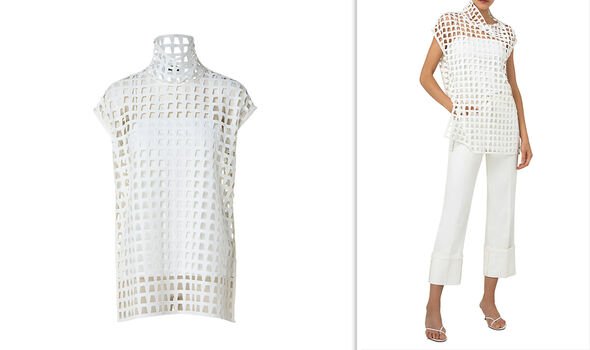 “As an intentional gesture this is often associated with a desire to court attention and to signal confidence rather than a desire to hide.

“It makes her look less fragile than her neutral or pale coloured lips and could be a very small statement to suggest that she is feeling increasingly back on top again.”

As for what the Princess wore for the occasion, Charlene chose a chic white long-line top and white trousers.

The top was particularly interesting as it was created with two layers; underneath was a plain thin-strapped top, and over it lay a cut-out t-shirt with a funnel neck.

The top is said to be from Akris and can be purchased from Saks Fifth Avenue’s website for £1,786.33.

It is the Embroidered Cutout MockNeck Top in colour Ecru.

The website describes it as: “Trapezoidal grid embroidery covers this mockneck top, designed with a layered silhouette.”

She completed the look with a small pair of diamond studs, her hair swept to one side and a dash of deep red lipstick.