President ScoMo gets loose in the studio

Scott Morrison simultaneously blushed with modesty and snorted his disdain at the accusation he’d been running a secret cabinet of one while he was prime minister. 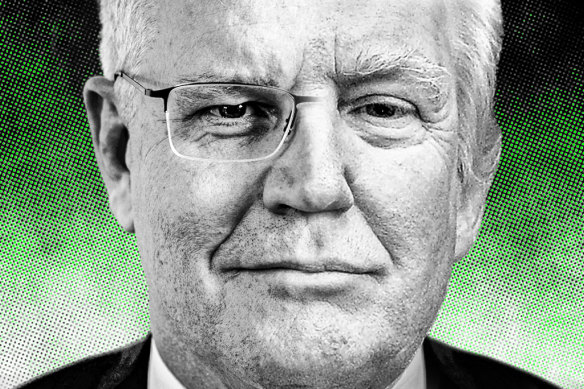 “All this fuss just because I got myself sworn in to every ministerial job. They needed expert help, those incompetents. I was ambitious for them.

“Imagine where we’d be if I didn’t school young Joshy Frydenberg to get the Treasury to understand how the economy really works.

“Have a go and you’ll get a go, I told ’em, and sure enough, the country responded and inflated itself fit to burst.

“And you wouldn’t dare think what our borders would look like if I’d allowed Karen Andrews to run home affairs by herself.

“How do you think I knew just in time that one of those boats I’d always stopped was afloat on election day? I was home affairs minister, that’s how!

“I phoned myself and ordered that I make a statement to save the country. But I never told anyone what I was up to. I’m a very stable genius.”

“I knew they’d find out, eventually, and they’d start yelping about democracy and the Westminster system and complaining about me and the governor-general and all that hooey. But they all missed the real story, just between me and you and our listeners.”

“Do tell,” said Shock, on the edge of his seat.

“I made myself president,” said Morrison, giggling. “For life.”

“But … for life? How does that work? The voters booted you, Mr Morrison,” Shock stammered.

Morrison climbed onto the broadcast desk and began dancing in his elastic-sided boots and spinning his scarf and waggling his fingers in triumph, as if the Sharks had just scored a try.

“Albanese thinks he won the election and he calls himself the prime minister,” he cried.

“It’s a Labor hallucination. I’ve created a republic and I’m president. Tra la la. You can call me President Scotty.”

“But we’ve got a governor-general and a Queen and a Constitution,” squeaked Shock. “We can’t be a republic with a president. Not without a referendum. Can we?”

A rictus masquerading as a smile played on Morrison’s lips. He swept at his skull as if there were a thicket of hair up there.

“What do you mean?” asked Shock.

“I don’t know, really. I just liked the sound of it,” said Morrison.

“Can we get some help in here,” cried Shock.

“There’s a president loose in the studio.”