The Albanese government has quietly wound up the Operation COVID Shield vaccination program, despite millions of Australians being overdue for their boosters and one-fifth of aged care residents waiting for their fourth doses. 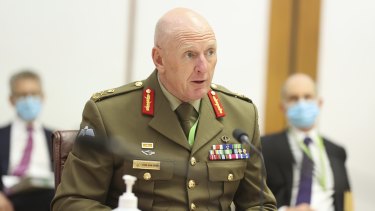 The government has wound up the COVID-19 taskforce led by commander Lieutenant-General John Frewen.Credit:Alex Ellinghausen

“I appreciate your involvement and support in the delivery of Operation COVID Shield and thank you for your assistance during my time as Coordinator General of the National COVID-19 Vaccine Program,” wrote Frewen, who has returned to his post as Defence Chief of Joint Capabilities.

Set up by the former Coalition government after the nation’s vaccination program got off to a slow start, Operation COVID Shield was tasked with ensuring public confidence in the COVID-19 vaccine rollout by overseeing the logistics of vaccine supply and the community messaging. General Frewen’s role circumvented the normal bureaucratic paths and allowed him to deal directly with groups and companies involved in the rollout, meet with state and territory leaders and chief health officers, and report directly to the prime minister.

Prime Minister Anthony Albanese has called a virtual national cabinet meeting to be held on Thursday after Health Minister Mark Butler raised concerns that millions of Australians had “effectively tapped out of the vaccination program”.

She called on the government to explain “what advice formed the basis of their decision to remove this most effective operation, particularly at a time when we are clearly still focused on vaccination as the primary defence against the current wave of the pandemic.”

“The infrastructure of the vaccination program is well-established with capacity to distribute up to 3 million doses around Australia each week,” the spokesman said.

“Existing vaccination channels remain in place – with more than 10,000 sites across the country where people can get their vaccination … every effort is being made to increase rates of third and fourth doses and rates of children’s vaccination.”

New data published by the Health Department on Monday shows while 96 per cent of aged care residents have had a third dose and 79 per cent have had a fourth, some aged care homes have third dose rates as low as 50 per cent.

He said in a speech to the Australian Medical Association national conference on Saturday that vaccine rates for third doses “have just stalled to quite an alarming extent” among those who received their booster more than six months ago, despite a government information campaign.

“There are about five million Australians who effectively have tapped out of the vaccine program,” he said.

Most people aged 16 and over – 96 per cent – have had two doses of a COVID-19 vaccine, but only 68 per cent have had a booster (third dose), which experts say is needed to slow the spread of the Omicron BA.5 subvariant amid waning efficacy of vaccines administered six or more months ago.

In residential aged care, 28,000 people who are eligible for a fourth dose are yet to receive one, representing 1 in 5 residents.