On the eve of COP26, the guest list remains a mystery

Just hours after the Queen made it clear she was unamused by the number of world leaders yet to confirm their attendance at the Glasgow climate talks, Prime Minister Scott Morrison announced he would attend.

But the identities of around 120 other leaders that the UK organisers of COP26 say will attend are still mostly unknown. 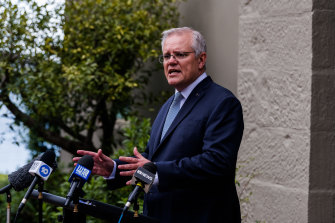 Scott Morrison announced on Friday he would attend the COP26 summit, but many other world leaders are yet to announce whether they will go.Credit:James Brickwood

US President Joe Biden has said he will be there, but it so far appears unlikely that his Chinese counterpart Xi Jinping will, as he has not left China since the COVID-19 pandemic began.

Without the commitment of these two nations – respectively the largest historical greenhouse gas emitter and the current one – it is believed the talks cannot succeed in curbing warming.

It is also not yet known if the leaders of a handful of other high-emitting nations, including Russian leader Vladimir Putin, Indian Prime Minister Narendra Modi or Brazil’s Jair Bolsonaro will attend the conference, which typically attracts over 20,000 dignitaries, diplomats, negotiators, scientists and activists.

“It must be the forum where we put the world on track to deliver on climate and that is down to leaders. It is the leaders who made a promise to the world in Paris six years ago, and it is leaders who must honour it.”

Some leaders have been distracted by pressing domestic issues, but it is telling that many lead countries widely viewed as climate laggards said Dr Wesley Morgan, researcher at the Climate Council and research fellow at Griffith Asia Institute.

To ensure they have a presence, some Pacific Island nations will be represented by a delegation of five Political Climate Champions, who include Cook Islands Prime Minister Mark Brown, Fiji’s Deputy Prime Minister Aiyaz Sayed-Khaiyum and Tuvalu’s Minister for Finance and Climate Change Seve Paeniu. The five were selected by the Council of Regional Organisations of the Pacific.

Pacific Islands Forum Secretary General Henry Puna said earlier this month there was no meeting greater for the region than COP26.

“The stakes are high because climate change is an existential threat to our people, and we know this COP is the final opportunity to keep the 1.5 degrees threshold within reach and avoid a tipping point of no return,” he said.

“That’s why COP26 is critical. World leaders, like our Pacific leaders, must affirm climate change as the single greatest threat facing all humanity and act with urgency to implement the Paris Agreement.”