On the brink: will COP26 fail Greta’s generation? 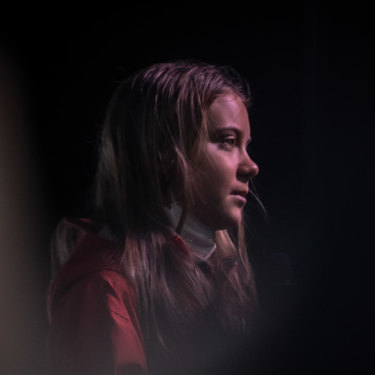 The summit was not all “blah, blah, blah” but its biggest ambitions still feel out of reach. Credit:Bloomberg

I n a basement restaurant in Glasgow last weekend, Alden Meyer, a veteran of three decades of United Nations climate negotiations, gathered a group of journalists and experts together in the hope the latter could explain to the former what was actually going on in the climate talks.

In his opening remarks, Meyer, who has advised many governments on climate and is now a senior associate of the think tank E3G, quoted a comment Barack Obama’s science advisor John Holdren once made about climate change.

“We basically have three choices: mitigation, adaptation and suffering,” Holdren said in 2007.

“We’re going to do some of each. The question is what the mix is going to be. The more mitigation we do, the less adaptation will be required and the less suffering there will be.”

‘We basically have three choices: mitigation, adaptation and suffering.’

On those key metrics, the years since have been wasted, despite the success of the 2015 Paris talks in delivering an agreement on a course of action the world might follow to save itself. 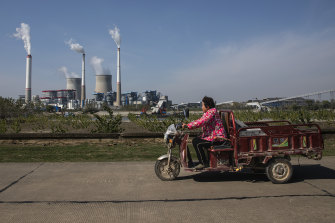 China’s climate pact with the US gave the summit reason to hope, but the superpower was also among the nations trying to water down the final aims. Credit:Getty Asia Pacific

Carbon emissions have continued to rise steadily upwards, as has warming, as has extreme weather, as has ocean rise and acidification.

But with the last hours of negotiating to come, it seems clear the central goal of COP26 – to halve emissions by 2030 so the world has a hope of reaching net zero by 2050 and in turn, perhaps, stabilise the climate at 1.5 degrees – will not be met.

And whatever the final outcome of the talks, the terms of the terrible equation Holdren laid out a decade-and-a-half ago have now shifted.

Due to past and ongoing failure on mitigation, there will now necessarily be far more suffering than there needed to be, and in the corridors of COP26, that fact is etched into the faces of delegates, particularly those from the global south.

There will also need to be faster mitigation and more expensive adaptation. Meyers points out that if we’d started acting decisively to drive down emissions as recently as 2018, we would have needed a 7 per cent cut in emissions each year to be on a 1.5 degree path. But we didn’t, and now we need a 10 per cent cut each year, a figure that grows every month of inaction.

We can now add the trillions of dollars needed for developing nations on the climate frontline. They are counting the cost of loss and damage caused by emissions released by wealthy nations over the past 200-odd years, since the industrial revolution began with the steam engines on the banks of the River Clyde in Glasgow

Well before this COP26 summit started, many had written it off.

There were those that feared that the United Kingdom had sidelined itself as a serious international player with Brexit, that Boris Johnson’s support for the project was rhetorical rather than substantial. There were fears that the summit’s president, Alok Sharma, was too distracted by cabinet duties to focus on building momentum. The energy crisis would wreck it, said others. What Meyer referred to as “the food fight and finger pointing between China and Russia” would derail it.

But overwhelming it all was the threat of COVID-19. Should the conference become a superspreader event, the cost to the UK hosts would have been catastrophic and the talks themselves could have been hampered as delegates retreated to lockdown in hotels. 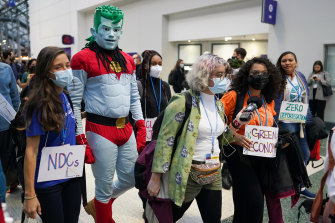 There were fears that a COVID outbreak could shut down proceedings; masks were everywhere, testing was daily. Credit:Getty

Fearing (rightly) that representation from some of the most climate vulnerable countries would be curtailed by pandemic travel restrictions, the Climate Action Network in September called for the conference, which was to have been held last year, to be delayed again.

That was never a serious consideration. In a very real sense, the hard work had already been underway for months. The UK and the US, the G7 and the G20 had laid out a year of diplomacy leading up to this fortnight. It was locked in.

“We say ‘No more blah, blah, blah… No more whatever the f–k they’re doing inside there’”

As the event kicked into its second day, Greta Thunberg offered her searing assessment of its worth to protests outside.

“Change is not going to come from inside there. That is not leadership. This is leadership… We say ‘No more blah, blah, blah… No more whatever the f–k they’re doing inside there’.”

Hers was, is, an absolutely reasonable point. The world has failed on climate, and it has particularly failed her generation. 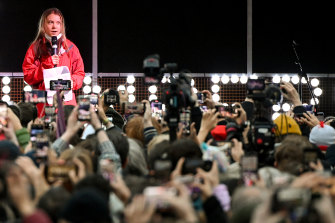 But inside, on that second day, the end of the leaders’ meeting was approaching and the tone was sincere and urgent.

“Recent climate action announcements might give the impression that we are on track to turn things around. This is an illusion,” said UN Secretary General Antonia Guterres, who has been carefully increasing the urgency of his own rhetoric for months.

“Failure to provide the critical finance — and that of loss and damage — is measured, my friends, in lives and livelihoods in our communities. This is immoral, and it is unjust,” said Barbados Prime Minister Mia Mottely in a standout address 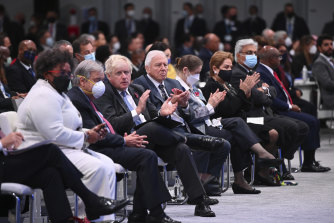 From left, Prime Minister of Barbados Mia Mottley, Secretary-General of the United Nations Antonio Guterres, British Prime Minister Boris Johnson and Sir David Attenborough attend the opening ceremony of the COP26. Mottley’s was a standout speech about the dire need for action particularly for island nations.Credit:AP

What was notable to many who had attended these conferences for years was that there was no challenge to the science of global warming, no argument against the need for action. The debate was settled.

Side deals and backtracking

Over the following days, a momentum orchestrated by the COP presidency was injected into the proceedings as negotiators began the painstaking work on what is known as a cover decision.

A series of pledges, essentially side deals to the UN negotiations, were announced. A pledge by 40-odd nations to phase out coal was welcomed, particularly for the inclusion of major coal users such as Poland and Vietnam. But enthusiasm was dampened because China, the US and Australia were not onboard. 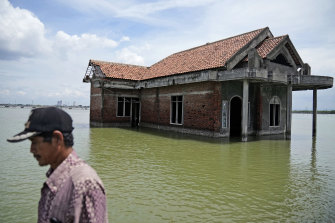 A man walks past a house abandoned after it was inundated by water due to the rising sea level in Sidogemah, Central Java, Indonesia, Monday, November 8, 2021. Credit:AP

More than 100 nations agreed to cut methane emissions by 30 per cent by 2030, a move scientists believed could have the single most significant impact on warming of all the side-deals.

Meanwhile, the private sector congratulated itself for announcing that $130 trillion worth of assets were now in line with a 1.5 degree efforts. Nigel Topping, the UK official appointed by the UN to be High Level Champion for Climate Action at COP26, told the Herald and The Age that this was “a big f—ing deal”. It was welcomed, though some analysts questioned the rigor with which the claims could be tested.

By the week’s end the most optimistic analyses of the pledges combined with new national commitments suggested that the gap had shrunk by as much as 0.7 of a degree.

Later projections by the United Nations’ Environment program and the widely regarded Climate Action Tracker challenged this in large part because many of the reductions commitments – such as Australia’s – were based on 2050 targets without being supported by the 2030 commitments that would make them achievable.

Either way, Johnson and Sharma’s campaign rolled on.

By earlier this week, criticism of Sharma’s presidency began to wane. In his management of plenary sessions and briefings, his manner was firm but calm. He drove the vast cumbersome process forward, constantly urging delegates to work harder and more generously, refusing to allow deadlines to slip.

Early drafts of the cover decision appeared and predictably enough contained elements to disappoint everyone, but some points that reassured observers, particularly a focus on 1.5 and action this decade.

“Come equipped with the currency of compromise,” Sharma kept telling delegates, before shooing them back into their meeting rooms.

As the optimism, and stamina, began to ebb on Wednesday, news broke that the US and China were about to make a joint announcement. Minutes later, Chinese climate envoy Xie Zhenhua was in the briefing room explaining that on this issue the two great powers had common ground. 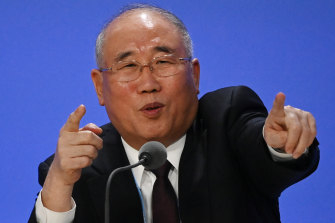 “We need to think big and feel responsible,” he told startled reporters “We need to work … hard to promote world peace and development. We need to actively address climate change through cooperation, bringing benefits to both our two peoples and peoples around the world.”

This sudden moment was long in the making, the product of months of meetings between Xie and his US counterpart John Kerry.

Again, by the following day the response was mixed. The statement was light on detail and self-congratulatory, said the critics. But it did focus on 1.5 and on action by 2030, argued those relieved that the great power rivalry had not ended the proceedings.

As negotiations continued and observers speculated about which elements of the cover decision might be lost in compromise – would China accept more accountability if the US backed down on ambition? – representatives of the most vulnerable nations kept reminding western diplomats, delegates and journalists that though the world faces a common threat, we don’t all bear the same risk.

On Thursday afternoon, news broke that India and China were leading a bloc of nations that wanted to dump the mitigation section of the draft – the language that focussed on 1.5 over 2 degrees, and that might call on nations that have not improved their 2030 targets to do so next year rather than in five years.

Around the same time, Mohamed Nasheed, former president of the Maldives and an ambassador for a voting bloc of nations known as the Climate Vulnerable Forum, issued a blunt statement.

“This COP is in danger of failing. The combined pledges from parties are still far from 1.5 degrees. If we don’t limit global temperature rise to 1.5 my country will die,” he said.

“Our islands will go beneath the waves. 40 million islanders around the world will become refugees.

“We are now in an urgent situation and we need to save this COP.”

The night before the summit began, a staffer for a key official considered the weeks ahead. Asked about the prospect of failure, he said the process created in Paris was already a miracle. There is no other diplomatic instrument in history that has extracted commitments from so many nations. There is no other mechanism to herd a global community of nations in the same direction, let alone one that might have a passing chance at reaching a consensus.

Whatever its outcome it will be too little too late, but far better than nothing.

Get weekday updates on the climate summit that will shape our future. Sign up to our COP26 newsletter here.