No clear winner… but Penny didn’t make the splash she’d hoped for: SARAH VINE offers her view on the Tory leadership debate from the sofa

After days of mudslinging on all fronts, finally the chance to hear the leadership candidates speak for themselves.

In the green room beforehand, pre-debate drinks and nibbles. Temperatures rising, both real and metaphorical.

It started off relatively amicably, Kemi Badenoch in sunshine yellow, Rishi tie-less, Liz Truss in a pair of killer heels, Penny Mordaunt elegant and groomed, Tom Tugendhat gently flirtatious. The nagging question in my mind: have Tom and Colin Firth ever been seen in the same room together?

Fair to say the audience was not a natural Tory one. The first question – ‘why should the public trust any of you?’ – was harsh and straight to the point. Truss first out of the blocks: she’s delivered what she said she would deliver, so there. Putin, Brexit, Northern Ireland Protocol, focus on the economy. Solid, if slightly wooden. 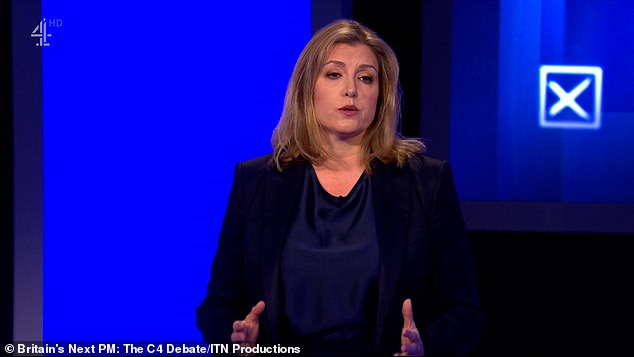 Penny Mordaunt was unequivocal in distancing herself from Johnson’s government: ‘I have spoken truth to power’ 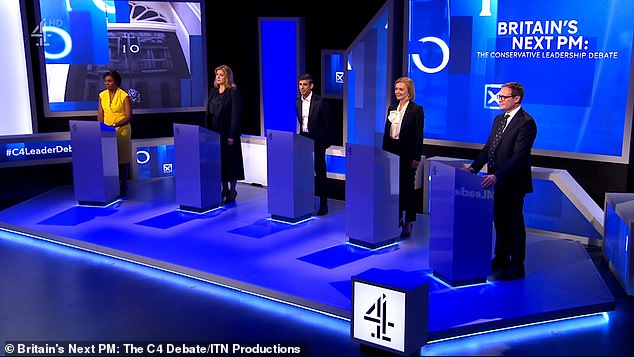 The compliments weren’t exactly flying, but no one seemed to want to address the elephant in the room: that this is turning into a dirty old fight 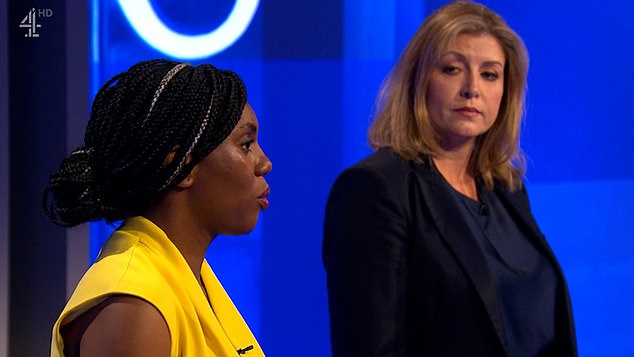 A winner? Too early to tell. But Mordaunt failed to make the splash she might have hoped for

Tom (bashful smile, friendly specs) was more relaxed – and more accepting of the problem of trust. His Unique Selling Point – and he knows it – is that he has always been critical of the current administration, and he was keen to play that advantage, pointing out that it’s always easy to criticise one’s enemies, much harder to criticise friends. Are you serving the interests of the people, or your own career? Quite. Rishi, ever the slick professional, was the first to address the questioner directly. The first rule of TV debates: win the trust and the engagement of the audience. He tried to give Boris Johnson the benefit of the doubt, he explained, but in the end the trust ran out.

On the other hand, he wasn’t going to walk away from the Government’s achievements. In other words, I shall have my cake and eat it. Kemi Badenoch seemed a little less self-assured. ‘We haven’t exactly covered ourselves in glory,’ she said, adding that as a minister, however, she was not afraid to take collective responsibility for mistakes made. Penny Mordaunt was unequivocal in distancing herself: ‘I have spoken truth to power.’

So far, so predictable. Addressing the question of blue-on-blue attacks between the candidates, things began to get a little more complicated. Viewers might have been slightly astonished to learn that, far from loathing each other’s guts, the panel all trusted each other. Best of friends, really.

The compliments weren’t exactly flying, but no one seemed to want to address the elephant in the room: that this is turning into a dirty old fight. Apart from Kemi: ‘Is Boris Johnson honest?’ asked Krishnan Guru-Murthy. ‘Sometimes,’ she replied, to gentle laughter from the audience.

Mordaunt showed her skill as a politician, by answering with a yes, which clearly meant no.

It was quickly becoming apparent that this wasn’t so much an examination of the relative merits of the candidates, more a punishment beating for the mistakes of the Johnson premiership. So much of the fire from Guru-Murthy was directed at the person absent here – that is to say Boris.

They ploughed on nonetheless. About halfway through, they began to put a bit of ground between each other. Sunak’s delivery was slick, but his main pitch remains his record in government – which in the context of Partygate remains problematic. Mordaunt, so far the bookies’ favourite, was nevertheless defensive on the question of trans issues. Both Truss and Badenoch challenged her hard on this, all but calling her a liar.

Tugendhat was the first to elicit any sort of positive response from the audience, receiving a faint round of applause for his line about the NHS, and later for being the only one who voted against the hated national insurance rise.

This seemed to embolden him: he became more confident as the minutes wore on. In fact, if the audience had any kind of favourite, it seemed to be him. He spoke to them as people, not voters, and sounded like a man with the right kind of motives.

Badenoch too made some headway, despite an annoying and persistent cough. Straight and to the point, relatable both.

By contrast, Mordaunt seemed a little defensive, as did Truss. Sunak was, despite everything, impressive. Experience does count in politics, even if it’s not always a 100 per cent positive record. He certainly seemed to have the best grasp of detail overall. A winner? Too early to tell. But Mordaunt failed to make the splash she might have hoped for.