Nicki Chapman on going back to work after brain surgery

‘Doctors told me I had a brain tumour the size of a golf ball’: TV presenter Nicki Chapman could have died without major surgery. Here she reveals how she coped with the crisis – and why she was back at work just two weeks later

In her large, light, super-tidy kitchen, television presenter Nicki Chapman is taking me through the past six weeks of her life, which include filming Escape To The Country, hosting her Radio 2 music show, attending her step-father’s 80th birthday party and undergoing a seven-hour operation to remove a life-threatening brain tumour.

It is a surreal experience to be in her presence as she talks about that operation to remove a meningioma brain tumour the size of a golf ball, which had slowly started to steal her eyesight, her voice and her memory before she was sent to A&E by her GP and told by a neurosurgeon she needed immediate treatment – ‘or that could have been it,’ she says. 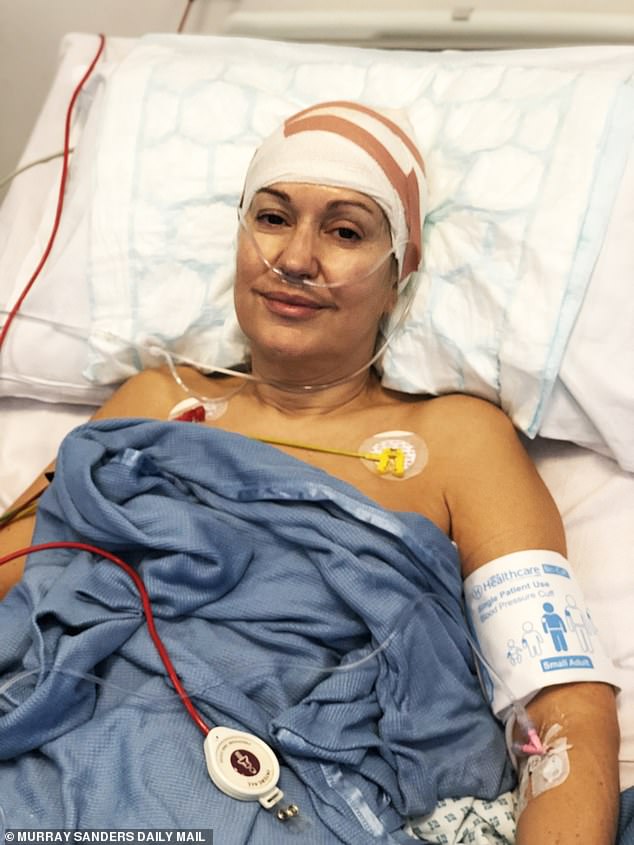 Nicki Chapman recovering from her operation at Charing Cross Hospital, London. ‘Once I knew what I was dealing with, I decided to put my faith in my doctor’

It is surreal, because as she talks she is making tea, laying out an array of expensive biscuits (all presents from concerned friends) and there is no sign that Chapman has been through any form of trauma. There are no emotional dramatics as she recounts making her will before the operation at Charing Cross Hospital in west London and sending a text to her husband, music manager David Shackleton, confirming that she did not want to be revived if her surgery went wrong.

The focus of her experience is on the fantastic NHS doctors, her vigilant GP, the kindness of her bosses on Radio 2, Escape To The Country and her Channel 5 show, The Great Gardening Challenge. She looks fit, well and untouched by illness. ‘The only difference is I can’t put in my hair extensions yet or have my usual acrylic nails,’ she says chirpily.

Chapman, 52, whose television career began on Popstars and Pop Idol in 2001 and 2003, has become a firm favourite with Middle England audiences, fronting shows from Holiday to the RHS Chelsea Flower Show to BBC Breakfast News and City Hospital. Her current show sees her team up with garden designer Diarmuid Gavin to see which gardener will win the chance to exhibit at RHS Wisley. ‘I was told I was perfect for television because I am so average,’ she grins. ‘And I am. I am an average 52-year-old woman and what you see is what you get.’

This is not true. Chapman is not average. What she has been through would have felled a lesser woman. Four months ago she had a series of episodes in which she lost vision in one eye, and the ability to speak properly, remember names and read or write emails. She put it down to the menopause, migraines and even the effect of a minor knee operation until a friend forced her to contact her GP. Fearing she was suffering from a series of strokes, her doctor sent her straight to hospital.

I ask how she coped without falling apart, without spending hours in tears, and she shrugs: ‘It was a choice. Once I knew what I was dealing with, I decided to put my faith in my doctor. He became my god. I didn’t Google anything, I didn’t panic. I was told my worst-case scenario but even then I didn’t think: “I’m going to die.” I thought: “I am going to do exactly what this man tells me because I believe he is going to make me better. I forced myself to be positive. The only thing I couldn’t stop was a tear, which just kept running from my right eye.

‘It was an NHS hospital. I went in under my married name, Nicki Shackleton, so there was no special treatment for being “that woman off the telly”. I was initially given medication, which stopped the episodes happening, and I told my boss at Escape To The Country and he rearranged my filming schedule. My boss at Radio 2 said she was happy for me to continue doing my live show if I felt able to – which I did. Neither of them breathed a word to anyone else. 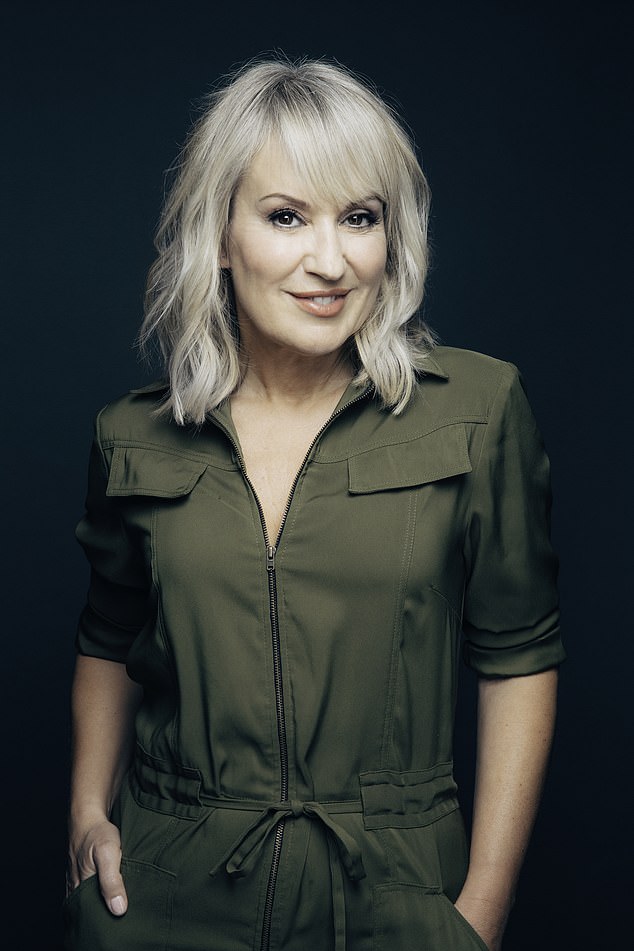 Chapman talks about being a woman – young and blonde – in the music business in the Eighties and Nineties. ‘You had to wise up pretty fast – and I did’

‘I went in for my operation a couple of weeks later,’ she says. ‘I was told I could end up with loss of vision or problems with my memory and speech, and obviously more could go wrong than that. I had my husband and my friend with me when I went in. So many people who didn’t even know me were just very kind. When I came out of the operation I told the doctor, who was in the recovery room with me, to text my husband, who was waiting several floors above me. That was the moment he broke down. He saw the message from a phone number he didn’t recognise and realised I must have given his number to someone, that I’d remembered it exactly, and that everything was fine.

‘As soon as I came home, I felt OK. I gave myself a couple of weeks to rest before I went back to Escape To The Country. I wouldn’t wish it on anyone, but I was lucky. I got through it. I’m here.’

There are tears in her eyes as she says those words, but Chapman refuses to let them fall. There is a stoicism in her that comes, she says, from the positive parenting she received as a child growing up near the sea in Kent.

‘We didn’t have lots of money but I had a very happy childhood. My dad [Barry, who sold photocopiers] worked really hard. I had a very academic older sister, Shelley, but I never shone at school.

‘When my sister passed her 11-plus, she got a bike. My parents told me if I worked hard and did my best, they would buy me a bike. I did work hard but I didn’t pass. But on the day of the results, there in the living room was a Raleigh bike.

‘I was always made to feel completely valued, happy and taught to always make the best of things. I think that has had a massive effect on the way I live my life.’

There is, I tell her, something else that has contributed to her attitude over her illness. It comes from a very different version of Nicki Chapman, one I knew well 20 years ago when she worked in the music industry. That Chapman was known for being unflappable and reliable and working with some of the most notoriously difficult names in the business. Her job was to get artists on to the biggest and best TV and radio shows. She started out – aged 19 – as a secretary and rose through record labels to running her own business, representing clients from Kylie Minogue to David Bowie and putting five wannabes called The Spice Girls on the world map back in 1996, before moving full time into presenting.

She admits the pop world helped prepare her for coping with disasters. ‘When your day-to-day job involves organising a major event with one of your artists and you walk into a hotel room to find them either not there, unconscious or in a real state, and just knowing you’ve got to be very calm, sort things out and be sure in your own head that you are going to make sure everything is going to be all right – there is definitely a connection to the way I dealt with what I went through.’

She was the complete opposite to most other women in the industry. ‘I came from a very secure solid background. I’d been to a convent school. I was reliable. I didn’t party and I definitely didn’t want to sleep with either the artists or anyone else,’ she says. ‘There was one occasion I was given an envelope with £1,000 cash by an artist and asked to “sort him out”. I handed it straight to my MD and said: “This is not what I do.” She was rapidly promoted.

She talks about being a woman – young and blonde – in the music business in the Eighties and Nineties. ‘You had to wise up pretty fast – and I did.’ There was sexism (she was paid half the money of her male peers but had the most success getting her acts on TV), sexual advances and drugs aplenty. ‘I refused to be on my own in meetings with certain figures in the industry,’ she says. ‘It wasn’t shocking to anyone, it was just how it was.’

She has worked with everyone from Van Morrison to Take That to Phil Collins. She and her then business partner signed the 19-year-old Amy Winehouse to their management label, along with a young Billie Piper. ‘With Amy we knew she was the real deal. We knew she had problems but that is part and parcel of the job.’

She has been offered many a book deal and is considering writing her memoirs, which will no doubt include the tale of one young pop star who had to be revived after a drug mishap by the only medic she could find in a hotel: ‘Prince’s personal doctor, who came head-to-toe dressed in white including white wellington boots. He spoke no English but completely understood we had to get this guy ready for his first major TV appearance – and he did.’ She grins at the memory. ‘What all those experiences taught me is that I never wanted to be famous.’

But she is, as her face is rarely off the television. ‘I think I’ve stayed because I work hard, I don’t complain and right now I am so bloody grateful for every day that comes.’