Newlywed, 26, discovered lump in her breast on honeymoon

Newlywed, 26, who discovered lump in her breast on honeymoon criticises NHS Covid rules that meant she had to go through chemo, a mastectomy and fertility treatment ALONE

A newlywed who discovered her breast cancer while on honeymoon has spoken of her upset after Covid rules meant she had to attend dozens of appointments alone – including her mastectomy surgery.

Charlotte Dudeney-Tucker, 27, from Hornchurch, east London, says she owes her life to the NHS but argues that some rules felt too strict considering the seriousness of her illness.

She had to have fertility-preserving IVF treatment – including an egg collection – on her own and even had her right breast removed with no family there due to virus rules.

And she says she is now worried about how many people are putting off getting their symptoms checked out because they cannot get a face-to-face GP appointment.

She believes no-one else should have to go through such stressful treatment without a hand to hold. 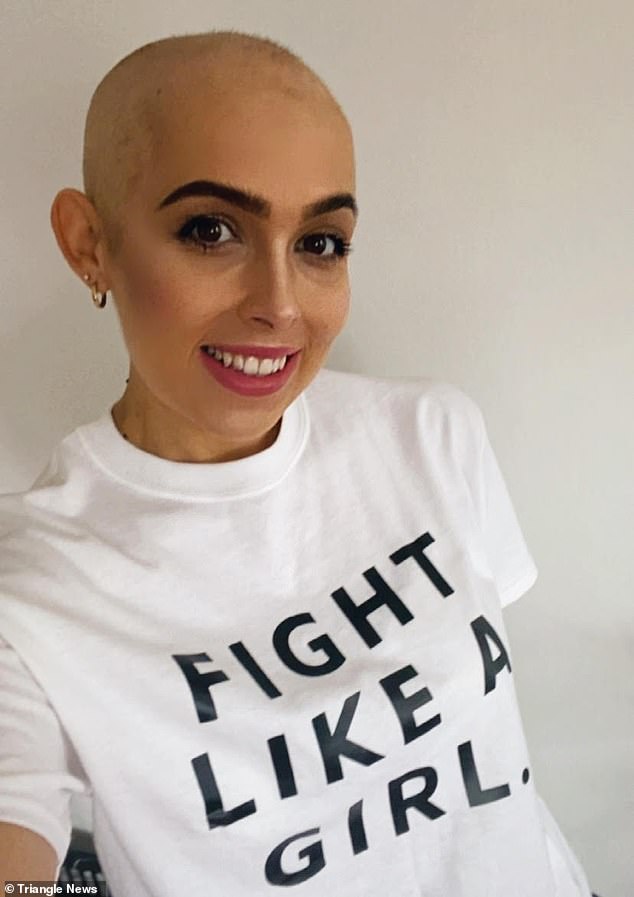 Charlotte Dudeney-Tucker, 27, from Hornchurch, east London, says she owes her life to the NHS, but has hit out at Covid restrictions that meant she had to go through difficult appointments and treatments on her own 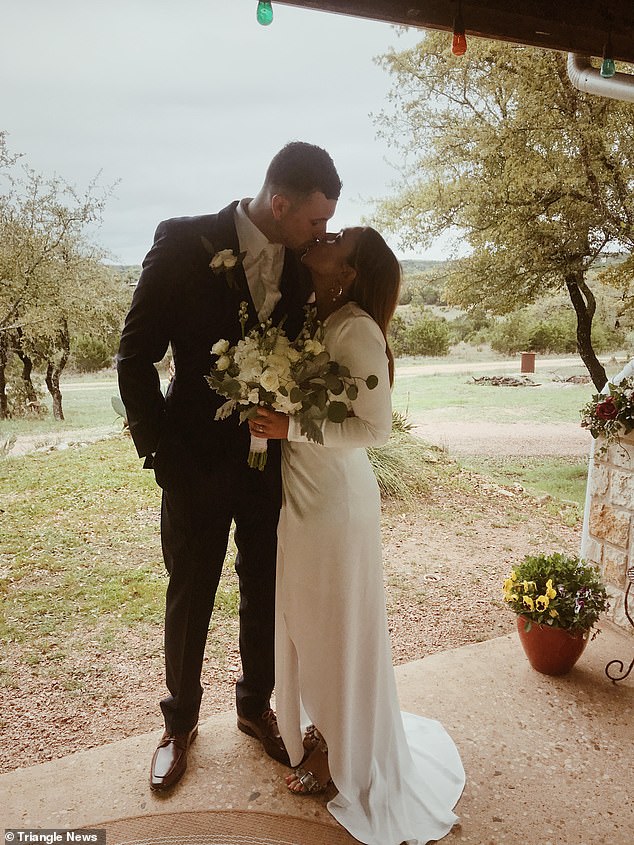 Charlotte Dudeney Tucker and her husband Cameron on their wedding day in Texas, after holding a scaled-back ceremony due to Covid

She said: ‘I don’t understand why Covid has been deemed more important than cancer treatment.

‘All of the restrictions in the hospital were purely due to Covid.

‘It was really tough at times, especially during all the fertility stuff when I just wanted my husband with me. And I was alone for about 24 hours after my mastectomy.

‘I feel really strongly about it. I’ve had to receive difficult and upsetting news completely on my own and I’ve had to have most of my treatments on my own. 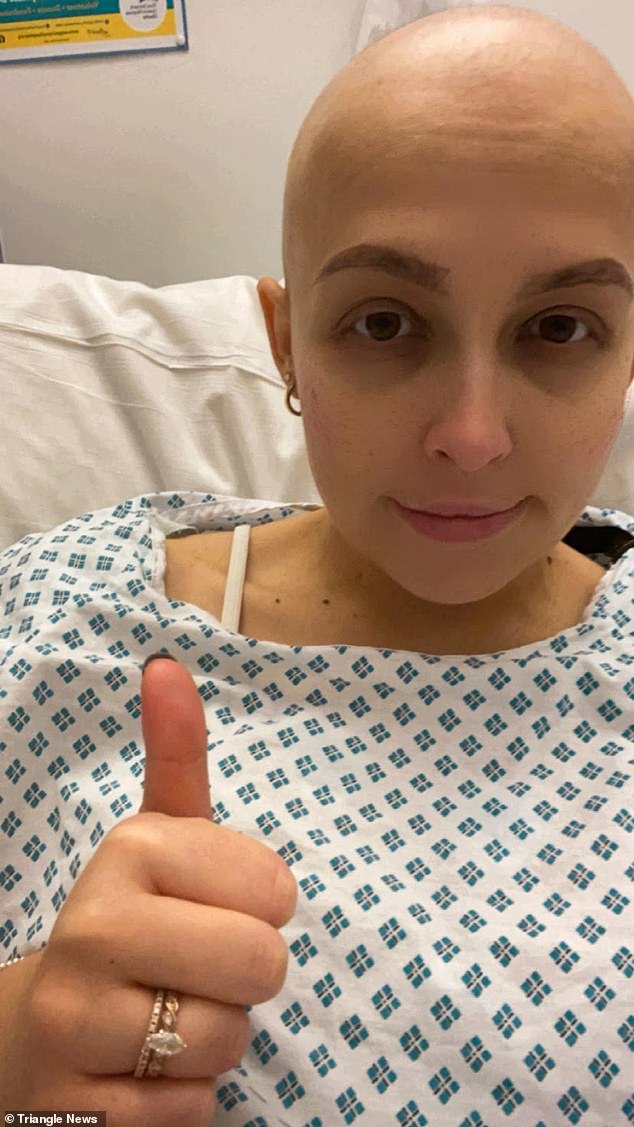 Charlotte, pictured during treatment in hospital, had to go through eight-hour-long chemo sessions by herself, as well as IVF treatment to preserve her fertility

‘Having cancer is hard enough, let alone during a pandemic when you have to face it on your own.’

Charlotte met her American husband Cameron Tucker, 25, when she was travelling the US four years ago.

They had planned their wedding in Austin, Texas, for last April and she had travelled there in February 2020 to finalise the ceremony.

But in March, Covid struck and she ended up stranded in the US with their large-scale nuptials cancelled in favour of a courthouse wedding with just the bride and groom and immediate members of his family.

Charlotte had planned to return to the UK to apply for her spousal visa, but since she was stuck in the US due to Covid-related travel bans, a solicitor told her to apply from within the country. 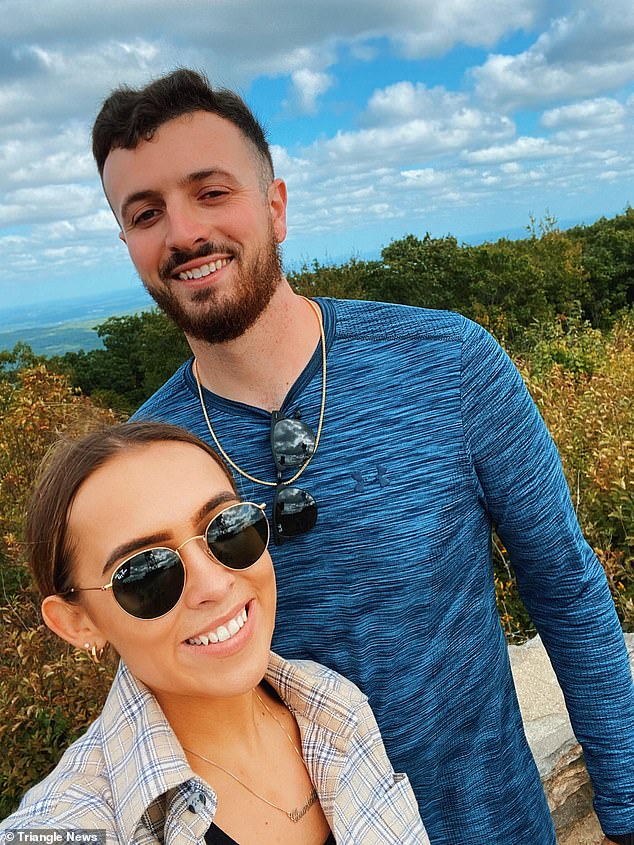 Charlotte with her husband Cameron, who she met while travelling around the US five years ago

As 2020 went on and US domestic rules relaxed, Charlotte and Cameron decided to take a trip to New England in September as a low-key honeymoon.

But while they were there, Charlotte discovered a lump in her breast in the shower and immediately began to panic.

‘As soon as I felt it I had a sinking feeling in my stomach as I’d never had any lumps and bumps before and I knew it wasn’t normal for me,’ she said.

‘I instantly thought it was something bad but everyone else thought I was mad.

‘My husband could feel it but he told me not to panic and we’d monitor it. 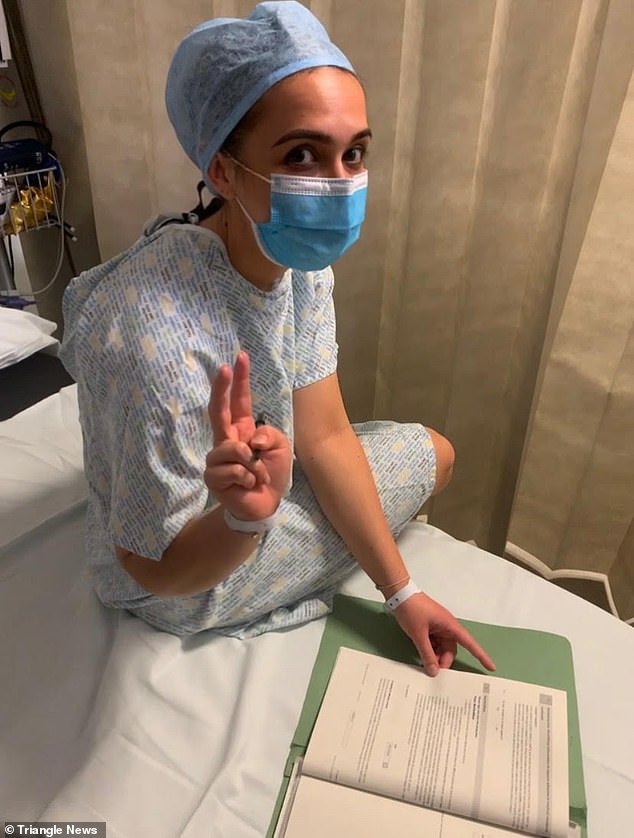 Charlotte, pictured in hospital, has revealed how Covid rules meant she had to attend dozens of appointments alone – including her mastectomy

‘I couldn’t shake the feeling it was something ominous.

‘Two days later I was worried sick and wanted to get it checked out for peace of mind.’

Because Charlotte was in between being a tourist with travel insurance and a resident with healthcare, she struggled to get anyone to take a look at the lump on her right breast.

She was turned away from five clinics due to her not being a US resident and being unable to pay via insurance.

Eventually she found an urgent care centre that said the lump should be further investigated, but specialist clinics said because of her age – then just 26 – they couldn’t see her until late November as she wasn’t a priority. 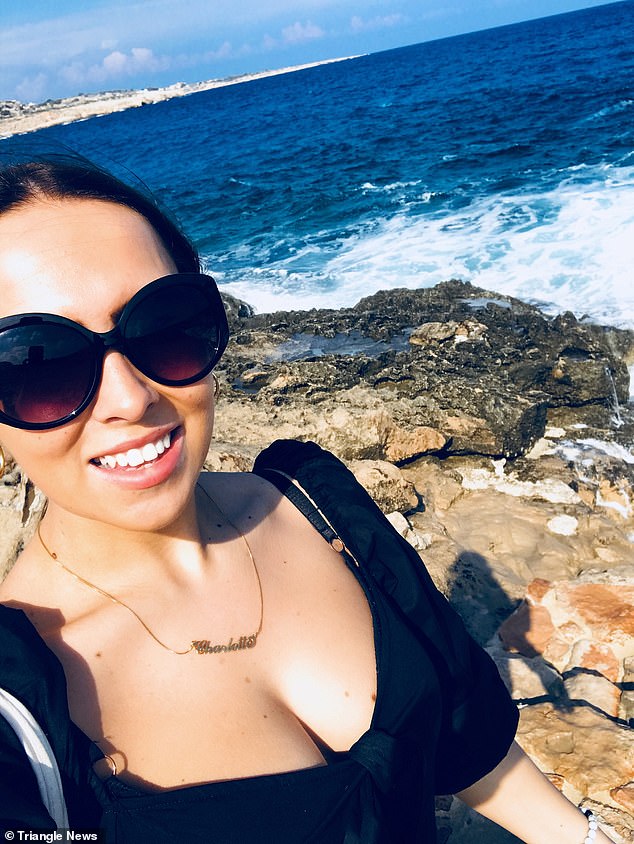 Charlotte Dudeney-Tucker, 27, before her cancer diagnosis. When she felt a lump in her breast she immediately panicked because she knew it wasn’t normal for her

She managed to secure an ultrasound and was then told she should have a biopsy, with the total bill for her US treatment coming to more than $4,000.

A few days after the biopsy on November 6, she was told over the phone that she had cancer.

Charlotte said: ‘The doctor said she was hoping that because of my age it would come back clear, but it hadn’t and she said ‘You do have cancer.’

‘In a way I felt vindicated as I knew I was right. My husband was devastated. I then had to call my mum and that was the hardest conversation I have ever had in my life.’

Charlotte immediately booked a flight home to the UK but was frustrated when she was made to quarantine for a fortnight despite repeatedly supplying negative Covid tests.

‘The most frustrating part was having to quarantine for two weeks despite having negative tests,’ Charlotte said. 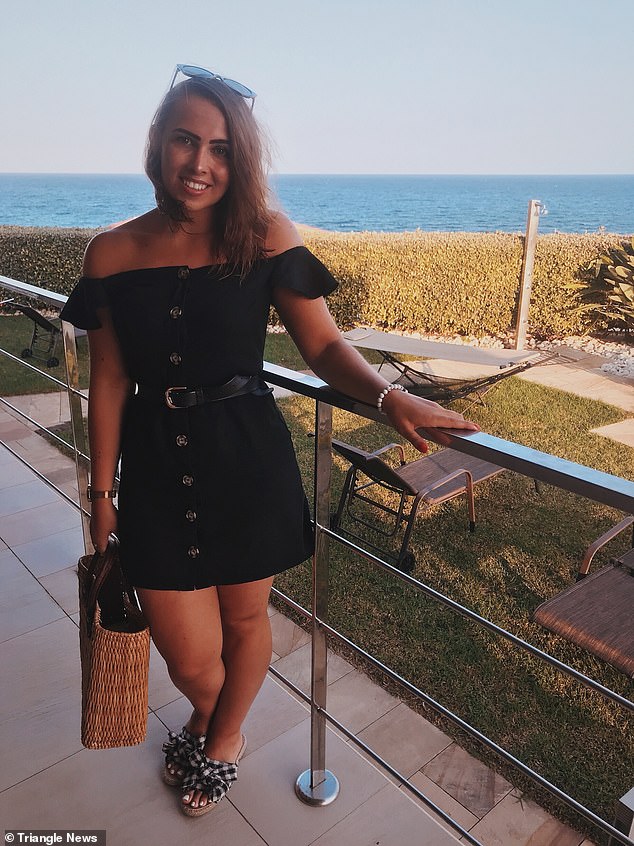 The newlywed, pictured before her cancer diagnosis, said she was terrified when Covid delayed her cancer treatment because she feared it would spread while she was waiting

‘I wanted to start my treatment as I was worried it was spreading.

‘There was one part of me that thought, “Maybe I’ll be back in Texas by the New Year” and another that thought I’d be dead by Christmas.’

After another mammogram and biopsy, Charlotte was diagnosed with stage 2a invasive ductal carcinoma, despite being just 26, having no cancer in her family and no genetic susceptibility.

After Christmas, she began fertility treatment at St Bart’s Hospital in London, but had to do all scans and an egg collection – where you are heavily sedated – alone.

At a second egg collection in January her husband was allowed in briefly but couldn’t stay.

Between February and June this year, Charlotte had seven rounds of chemotherapy at Queen’s Hospital in Romford, Essex, as well as immunotherapy to shrink the tumour.

Some of her chemo infusions were eight-hours long and she was, again, alone.

And in August at Broomfield Hospital in Chelmsford she had her right breast removed with no family there to see her into surgery.

In fact, it was 24 hours before anyone was allowed in to visit her due to pandemic restrictions.

Even more frustratingly, she had received both doses of the vaccine by that point, the first in February and the second in May.

She has now been put into a chemical menopause and will be on hormone blockers for ten years, but as the couple made seven healthy embryos during their IVF treatment it is hoped that she will be able to have children when she is older.

Charlotte will need to stay in the UK for at least a year because she is due to have more low dose chemotherapy and will be on immunotherapy until spring 2022.

What is breast cancer?

Breast cancer develops from a cancerous cell which develops in the lining of a duct or lobule in one of the breasts.

When the breast cancer has spread into surrounding breast tissue it is called an ‘invasive’ breast cancer. Some people are diagnosed with ‘carcinoma in situ’, where no cancer cells have grown beyond the duct or lobule.

Most cases develop in women over the age of 50 but younger women are sometimes affected. Breast cancer can develop in men though this is rare.

Staging means how big the cancer is and whether it has spread. Stage 1 is the earliest stage and stage 4 means the cancer has spread to another part of the body.

The cancerous cells are graded from low, which means a slow growth, to high, which is fast growing. High grade cancers are more likely to come back after they have first been treated.

A cancerous tumour starts from one abnormal cell. The exact reason why a cell becomes cancerous is unclear. It is thought that something damages or alters certain genes in the cell. This makes the cell abnormal and multiply ‘out of control’.

Although breast cancer can develop for no apparent reason, there are some risk factors that can increase the chance of developing breast cancer, such as genetics.

What are the symptoms of breast cancer?

The usual first symptom is a painless lump in the breast, although most breast lumps are not cancerous and are fluid filled cysts, which are benign.

The first place that breast cancer usually spreads to is the lymph nodes in the armpit. If this occurs you will develop a swelling or lump in an armpit.

How is breast cancer diagnosed?

If you are confirmed to have breast cancer, further tests may be needed to assess if it has spread. For example, blood tests, an ultrasound scan of the liver or a chest x-ray.

How is breast cancer treated?

Treatment options which may be considered include surgery, chemotherapy, radiotherapy and hormone treatment. Often a combination of two or more of these treatments are used.

How successful is treatment?

The outlook is best in those who are diagnosed when the cancer is still small, and has not spread. Surgical removal of a tumour in an early stage may then give a good chance of cure.

The routine mammography offered to women between the ages of 50 and 70 mean more breast cancers are being diagnosed and treated at an early stage.

She was told a fortnight ago that she is currently cancer free.

Now she has urged anyone with concerns to book a GP appointment as soon as they can.

She said: ‘I worry about how many people – not just young people – are putting off going to the doctors to get a symptom checked out.

‘They could be living with undiagnosed cancer.’

Only four per cent of people are diagnosed with breast cancer under 40.

The Royal College of General Practitioners recently said it was a myth that people could not secure face-to-face GP appointments, with chair, Professor Martin Marshall, saying general practice was open for business.

But figures show just 57% of people needing appointments had them face to face in July, compared with 80% before the pandemic.

Charlotte is supporting the charity Breast Cancer UK this October – Breast Cancer Awareness Month – to raise awareness of the Breast Cancer UK Prevention Hub; to encourage people to make some simple lifestyle changes that can help lower the risk of developing breast cancer.

A spokesperson for Mid and South Essex NHS Foundation Trust, which runs Broomfield Hospital, where Charlotte had her mastectomy, said that visitors to the hospital were still restricted.

She added: ‘We understand the importance of being able to see loved ones while in hospital, which is why we are doing all we can to support people to keep in contact while under our care.

‘The safety of our patients and staff is our main priority and where it is not possible to have visitors due to the risk of infection, this is explained and patients are given the opportunity to speak with family or friends in other ways, such as through the use of video calls.’

For more information on the early signs of breast cancer and how to check your breasts visit: breastcanceruk.org.uk