New York State legislation that would give adult survivors of sexual abuse a one-year “lookback” window to file lawsuits – even if statutes of limitations have expired – cleared a hurdle Thursday when the state’s Senate voted to approve the measure.

For the legislation to become law, it will also have to be passed by the state Assembly before the legislative session ends on June 10, and then be signed by Governor Andrew Cuomo.

Asked if the Assembly would vote on the bill, and if Assembly Speaker Carl Heastie supported it, a spokesperson said, “Our members are being deliberative and thoughtful.”

The proposed legislation is similar to the Child Victims Act, which was passed in 2019 and led to thousands of lawsuits.

In 1993, nearly two decades before Hadden was charged in state court with sexually abusing patients, Dian Saderup Monson said she wrote an “excruciating” letter to warn the head of Hadden’s department about his behavior. Hadden continued working until 2012 and was charged in 2014.

Now Monson is one of more than 200 former patients signed on to a lawsuit claiming Columbia University “concealed” allegations of sexual abuse by Hadden for decades.

Monson and several other former patients were gathered outside Columbia University on May 26 to urge New York State lawmakers to pass the Adult Survivors Act.

“No one wants a sexual assault to go unpunished, yet they do. No matter when it happened, we just want survivors to be protected. That’s what everybody says, but it doesn’t ever seem to happen,” Maloney said. “My question is, Why do we have the statute of limitations to begin with?”

Marissa Hoechstetter, a former patient of Hadden’s who is among those leading the efforts to get the Adult Survivors Act passed, said “it takes years to realize the full reach of someone’s crimes and women continue to report Hadden to law enforcement even today.”

Hoechstetter said during a phone call Friday that the bill may be helpful for some of the former patients in the Columbia lawsuit, which covers allegations dating back nearly 30 years. 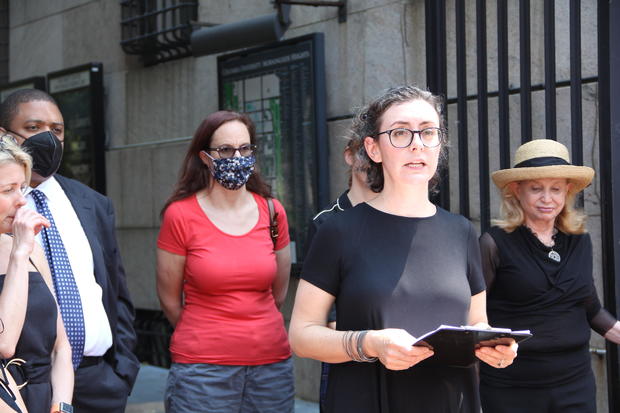 Hoechstetter was among 17 women who filed suit against Hadden and Columbia in 2018, but the number of potential plaintiffs in the suit grew after Evelyn Yang — whose husband Andrew sought the Democratic nomination for president and is currently running for New York City mayor — revealed in a January 2020 CNN interview that she was among Hadden’s former patients.

“It makes me really angry because I feel like, if they had only paid attention — I wrote a three page, very detailed letter that was excruciating to write. I never let my husband read it. I don’t think I told him about it. I couldn’t bear the thought of anyone even reading it. It was so awful and they just ignored it apparently,” Monson told CBS News.

Asked about Monson’s letter and the Adult Survivors Act on May 26, a spokesperson for Columbia University said, “Nothing is more important to Columbia than the safety of our patients, and we condemn sexual misconduct in any form. We commend all those who have called Robert Hadden to account for his abhorrent actions and deeply regret the harm he caused to women in his care, and to their families.”

Hadden was charged in 2014 in New York state court on allegations of sexual assault involving six women. In 2016, he agreed to plead guilty to two individual counts of a criminal sex act in the third degree and forcible touching. The no-jail plea deal downgraded his sex-offender status to the lowest level — meaning he is not listed in New York State’s online sex offender registry.

In September 2020, federal prosecutors unveiled new charges in six cases in which patients traveled between states for their appointments with him, but prosecutors alleged in the indictment that Hadden assaulted “dozens of female patients, including multiple minors” between 1993 and 2012. Each of the six counts of enticing and inducing individuals to travel interstate to engage in illegal sexual activity carries a maximum sentence of 20 years in prison.

Hadden has entered a not guilty plea in the case. An attorney for Hadden did not reply to a request for comment.

The office of Manhattan District Attorney Cyrus Vance said in September that it is conducting an “intensely active” investigation “which examines potential failures by Dr. Hadden’s employer and hospital to disclose additional incidents of abuse to our office and to regulators when required.”

That investigation is active and ongoing, according to a source with knowledge of the case.