Never mind the 45 years since they were in their raggedy prime; legendary Manchester punk icons Buzzcocks are still riffing and raging through all new, original music.

The band began as a ramshackle opening act for Sex Pistols in 1976. What they lacked in proficiency, they made up for with enthusiasm and unadulterated stage energy. Steve Diggle (guitar), Steve Garvey (bass guitar), John Maher (drums) and Pete Shelley (vocals) pioneered the UK punk scene alongside Siouxsie and the Banshees, The Clash and The Damned.

“We never planned anything,” says Diggle, 66. “It was in the moment; let’s get the band together, say what we’ve gotta say and create some excitement. If we get one or two gigs, let’s see where we go from there.

“We opened up for Sex Pistols in Manchester and from there we got other gigs. Suddenly, the press reviewed us and put us in all the music pages. Punk was new then. Suddenly, everybody wanted us, know what I mean?” 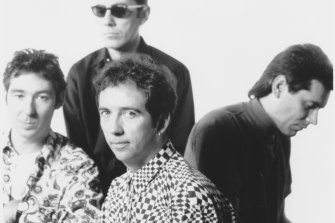 The success of their debut EP Spiral Scratch shocked no one more than the band when it sold 16,000 copies in six months. It became an instant classic, if not for its astounding commercial success, but for its raw chutzpah in existing and appealing to a generation of disenfranchised British youth.

The band has weathered plenty in their four decades together. Original vocalist Howard Devoto left to form Magazine in 1977, then the band broke up in 1981, reformed in 1989 and suffered the death of frontman Pete Shelley in 2018. Diggle stepped up to the mic as the band’s remaining original member and having long been a co-songwriter. While their full-length studio album won’t be released until later in 2022, their new Senses Out Of Control EP is a taster. 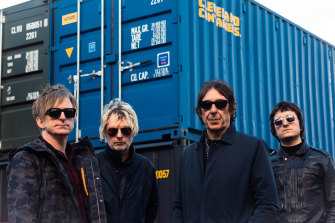 ”Buzzcocks needed a new album, a new start without Pete,” Diggle says. “I know how the guitar goes and how the words go; I’ve written over 50-odd songs for Buzzcocks in the past. It was just easier for me to get on with it at home, really. It’s got a good vibe, this one, back to our roots. It’s got that timing, that urgency, that tune and complexity of the lyrics.“

Their new single, Senses Out of Control, is a thrumming, solid chunk of melodic punk rock with Diggle’s nasal Mancunian drawl repeating “senses out of control” as if he’s on the comedown from a bad acid trip. The steely spiralling, sprawling guitar riffs lay the groundwork for Diggle’s jangly, sing-song vocals.

It rivals their 1978 chart-hit “Ever Fallen in Love (With Someone You Shouldn’t’ve)” as the catchiest of Buzzcocks’ singles.

“We had a very distinctive sound, didn’t we?” recalls Diggle. “We weren’t proficient at the beginning, but it was always about the attitude.”

The Buzzcocks’s EP Senses Out Of Control is released on April 29.