Nature instead of pills: GPs have realised the healing power of spending time outdoors 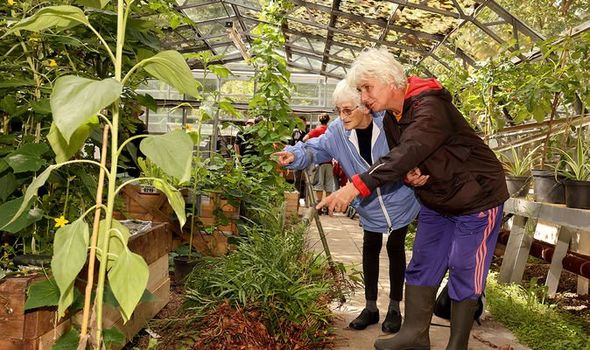 But Hasti, 16, is a picture of serenity after spending months helping to restore an abandoned 50-year-old greenhouse and fill it with plants on the edge of Blackburn, Lancs.

She said: “Restoring this greenhouse and linking up with nature have really helped me. I have made friends and find nature very calming.

“I am helping the community, and seeing plants grow into something beautiful motivates me. I feel like I am part of something bigger. It gives me something to look forward to and makes me worry a little less.”

Two years ago, Hasti defied the Iranian authorities by singing in public — which is illegal for women — and was arrested and interrogated for hours by the police.

Get the latest three-day weather forecast where you live. Find out by adding your postcode or visit InYourArea

Then her mother converted from Islam to Christianity, which carries the death penalty in Iran, and they had to flee when her underground church was raided.

To compound their ordeal they had to leave Hasti’s father behind because he was still recovering from an accident. They are currently sweating on whether they will be allowed to stay in the UK.

Hasti, who cares for her mother and is on a youth forum advising the local council, added: “I do have nightmares. It has been two tough years. I really miss my dad. I worry about him.”

The teenager is one of hundreds suffering from anxiety, loneliness and mental health problems to benefit from the healing powers of MyPlace, a scheme run by Lancashire Wildlife Trust and Lancashire and South Cumbria NHS Foundation Trust.

Its success over the past five years has helped to pave the way for seven trials of prescribing nature instead of pills — from Somerset to Humberside — in a £5.77million Government scheme. It has also added to evidence that time in green spaces can help patients recover from operations or cope with stress.

The Daily Express has made space for nature part of our Green Britain Needs You crusade.

Getting people active could also help to save the NHS £2billion a year by tackling obesity, says a Groundwork study, with potentially further large savings from tackling mental illness.

Another scheme, run by the Green Light Trust, mainly on RSPB reserves in East Anglia, led to a 28 percent reduction in GP appointments and a 24 percent drop in visits to A&Es among participants.

Green Light says 80 percent of its patients make a full recovery, while an Essex University study put the savings per successful patient at £24,000 over a decade. Dom Higgins from The Wildlife Trusts said: “It’s a Natural Health Service. We provide people, place and purpose.

“They find company, meaning in what they are doing and take part in physical activity. It’s the perfect mix.

“We want this to be introduced everywhere but it needs to be properly funded through the health system. It can’t be hand to mouth.”

Gardening has been a godsend for widow Dilys Walker, 59. It has helped get her out of the house and take her mind off her grief since Ian, her husband of 25 years, died of cancer two years ago.

Dilys, whose next-door neighbour Hazel Wilson accompanies her to each session, is also learning new skills. They have made a planter and found themselves using a saw and a drill for the first time.

Dilys, from Blackburn, said her life imploded when her lorry driver husband died, so her doctor put her forward for the MyPlace project. She said: “We have only been coming for three weeks but it has already made a difference.

“I’m still taking medicine for my condition but hopefully by doing this I will get to the point where I do not need to take pills.”

ONLY PLACE I CAN RELAX

Tinta Ali swapped a life of persecution and fear for peace in the greenhouses and woods of MyPlace.

Eleven years ago he fled the Ivory Coast after his father was assassinated, and has been coming to the project since it started in 2016.

Tinta, 34, said it was like going back to his homeland, “back to nature, and I never thought I would find this in Blackburn.

“It is quiet and calm. There’s no politics, no war, just greenery. It is beautiful.

“It may seem that you are working with plants but you are being healed naturally – by the atmosphere, by the people. If you have the courage to be kind to plants, you will surely be kind to people.”

Mum-of-three Saleha Bhayat says the therapeutic power of nature has helped her give up medication, and opened up new horizons for her.

Saleha, 47, said: “I had a breakdown. I gave up my work in retail and I gave up everything. My go to was alcohol which was total rebellion for a Muslim girl.”

She started going to MyPlace in Blackburn about four months ago. Describing it as magical, she said: “I have benefited so much from nature.

“I have stopped my medication. I love being around people. It has really helped my wellbeing and mental health.” Going there opened up other opportunities, and Saleha is now doing an online course for women about herbs and medicine.

Whether it’s spending the afternoon walking through the countryside, or tending to plants in a window box, being around nature helps to improve our physical and mental wellbeing.

The pandemic has highlighted the importance of being able to connect with our natural environment.

I am a major advocate for getting people out into nature as well as promoting the role we can all play in protecting our planet – things I know the Express also champions through its Green Britain campaign.

This was part of the thinking behind our Green Recovery Challenge Fund.

We have awarded more than £80million to nature-based projects to increase biodiversity, plant trees and create over 2,000 jobs.

Last month I was in the Severn Valley visiting B-Lines, an initiative bringing the local community together and creating beautiful insect pathways.

We’ve recognised the physical and mental healing powers nature offers people too. GPs and health services are making green social prescriptions for some patients to participate in some of these initiatives to tackle a range of issues.

For example, the Green Light Trust offers people in Suffolk and Norfolk the opportunity to take part in woodwork and conservation tasks. This is an eight-week programme helping people with mental health issues, substance abuse problems and social exclusion.

The results are impressive.

Research from the University of Essex found that GP appointments and A&E visits reduced by a quarter amongst participants.

Another excellent example is MyPlace run by Lancashire Wildlife Trust. It leads conservation initiatives, as well as creating five permanent jobs as a result of our funding.

And we want to go further – which is why we’ve just launched the green social prescribing pilot, awarding more than £5million to schemes helping the mental wellbeing of communities hardest hit by the pandemic.

I am determined to see us build a greener future for ourselves and generations to come. At the same time, we can reap the mental and social wellbeing benefits that can be provided by our surroundings as we improve our natural habitats.