Senior Nationals are putting the Prime Minister on notice over his promise to protect regional jobs under a commitment to reach net zero emissions, warning the bush has been burnt before by national reforms like the Murray Darling Basin Plan and the sale of Telstra.

Federal Cabinet will on Wednesday debate a plan to decarbonise the economy developed by Energy and Emissions Reduction Minister Angus Taylor, ahead of a Nationals party room meeting on Sunday. 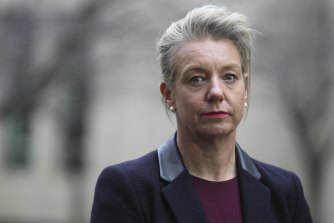 Prime Minister Scott Morrison has signalled his intent to commit Australia to set a 2050 target of net zero emissions ahead of the United Nations climate summit in Glasgow next month, but he needs the junior Coalition partner to back the move.

Nationals Senate leader Bridget McKenzie said on Wednesday said there would be no deal with her party “unless it’s right for the regions”.

Mr Taylor said on Tuesday there would be a regional jobs boom from clean energy and while traditional industries would need to change, the government’s net zero plan would shield them from losses.

“Agriculture, heavy industry, resources. We don’t want to see those industries being badly damaged. And they don’t need to be,” Mr Taylor said.

Senator McKenzie was sceptical of the net zero plan and said the Liberal Party had failed to deliver for the bush on water reform and telecommunications.

“There have been promises out of Canberra of perceived opportunities that haven’t been realised,” she told ABC radio. “The lived experience of people out there in the regions isn’t what was promised prior to those decisions being made.”

The Murray Darling Basin Plan, an environmental reform to recover water from irrigators instigated by the Howard government, has generated anger in regional communities for more than a decade. The Nationals have lost several formerly safe state seats in irrigation areas to independents and minor parties. More challenges are expected in the upcoming federal election.

The privatisation of public telecommunications provider Telstra, which kicked off in 1997, is another sore point with ongoing complaints of poor services across much of regional Australia.

Nationals Agriculture Minister David Littleproud said the party’s position on net zero would be determined by a majority vote but the Prime Minister had given his party “much comfort” by promising “rural Australia won’t foot the bill this time”.

“We want to make sure that regional Australia doesn’t foot the bill because it did last time,” Mr Littleproud told Sky News on Tuesday. “We want to be honest and transparent with the Australian people and the global community, otherwise you don’t have standing.”

Moderate Liberals are urging the federal government to set more ambitious climate targets. Chair of the Senate Environment and Communications Committee Andrew Bragg told a meeting of the Investor Group on Climate Change on Wednesday that “as a nation, we can all win from net zero” as he calls for regional support amid faster decarbonisation.