A music industry accountant who gave evidence for the prosecution at the recent embezzlement trial of Guy Sebastian’s former manager has been accused of siphoning off more than $1 million from several prominent Australian bands including ARIA award winners Peking Duk.

Damien Luscombe was stood down from his role as a partner and business manager at White Sky Music accounting services last week after the company claims it discovered a series of discrepancies in the accounts of at least two major clients. 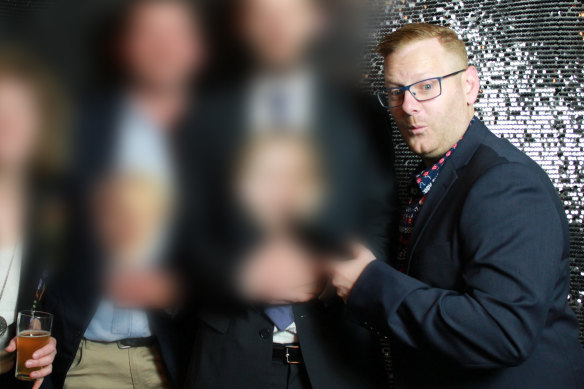 Damien Luscombe, who has been accused of embezzling more than $1 million from prominent musicians Gotye and Peking Duk

The firm, which manages the finances of more than 500 artists, promoters, music festivals and record labels, called in external auditors and provided a statement to Victoria Police’s fraud squad on Tuesday.

A source familiar with the investigation, but not authorised to speak publicly, told The Age that the company believed more than $1 million may have been embezzled, and electronic dance band Peking Duk was among the alleged victims.

Management for Peking Duk did not respond to requests for comment.

While a few other musicians may have been affected by the alleged fraud, major acts represented by White Sky Music, including Tame Impala, Vance Joy, Amy Shark, John Butler, Angus and Julia Stone and Guy Sebastian, were not among those the company claim have been impacted.

White Sky Music management did not respond to questions from The Age but released a statement confirming the matter had been referred to police.

“White Sky Music Pty Ltd has become aware of an issue affecting a small number of accounts managed by one of our senior employees. That person has now been stood down from his employment,” the statement said.

On Wednesday afternoon, the company also emailed its clients advising them of the alleged embezzlement.

A Victoria Police spokeswoman confirmed it had received a report involving allegations of fraud.

“Investigators from the financial crime squad have made contact with the organisation to assist with enquiries and are awaiting further information to make an assessment on whether an investigation will proceed,” the spokeswoman said.

Luscombe did not respond to phone calls or requests for comment. The Age does not suggest the company’s allegations are true, only that they have been referred to police.

According to a profile on the company website that was removed on Wednesday afternoon, Luscombe joined the business in 2010 and had “hands-on experience with every element of the services we offer and become an expert in most”.

“His innate understanding of the challenges of running a small business makes him a client favourite. His process-driven work ethic and attention to detail make him a valued member of the team,” the now-removed profile said.

In June, Luscombe gave key evidence at the trial of Guy Sebastian’s former manager Titus Day, who was found guilty by a jury and convicted of 34 charges, including the embezzlement of more than $620,000 from the former Australian Idol winner.

Luscombe told the NSW District Court that Sebastian had hired White Sky Music to manage his financial affairs in 2015.

He said either Sebastian or Day’s company 6 Degrees had provided authorisation to White Sky in order for payments to be made.

“If there was anything deducted for the purpose of commission we would generally ask Titus to provide where that came from,” Luscombe told the court.

“The problem that we had here was we were suggesting what the commission may look like based on our figures. But it certainly didn’t match the money that hit Guy’s bank account,” he said on June 2.

The Age does not suggest that Luscombe was involved in the embezzlement of performance, royalty and ambassador fees from Sebastian.

Day will face a sentencing hearing in the NSW District Court on November 4.