The mother of Becky Godden-Edwards, who was murdered by double killer Christopher Halliwell in 2003, has revealed that she’s now ‘good friends’ with the detective who was blamed for the case against her daughter’s murderer falling apart.

Detective Sergeant Steve Fulcher resigned from the police force in 2014 after he was found guilty of misconduct for not reading Halliwell his rights when he first confessed to killing Godden-Edward in a remote rural location in 2011.

The blunder saw Halliwell charged with the murder of 22-year-old Sian O’Callaghan in May 2012 but not convicted for Becky’s killing.

Despite Halliwell’s conviction being set back by four years by DS Fulcher’s error – he was eventually convicted in 2016 when new evidence emerged – Becky’s mother reveals she’s now struck up a close friendship with the detective and his wife. 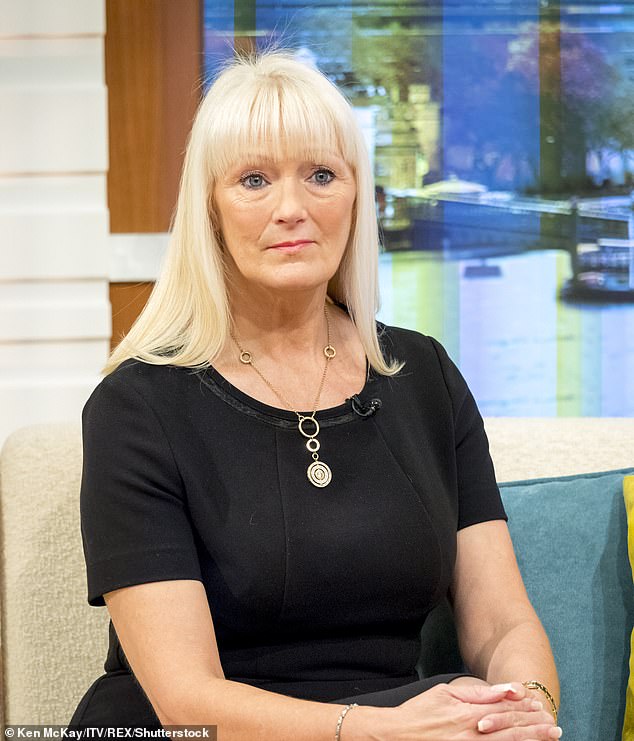 Karen Edwards, mother of 21-year-old Becky Godden-Edwards, who was murdered by Christopher Halliwell in 2003 says she’s struck up a close friendship with former DS Steve Fulcher and his wife Yvonne – despite the fact Fulcher’s errors almost saw her daughter’s killer escape conviction (Karen Edwards pictured on This Morning in 2016) 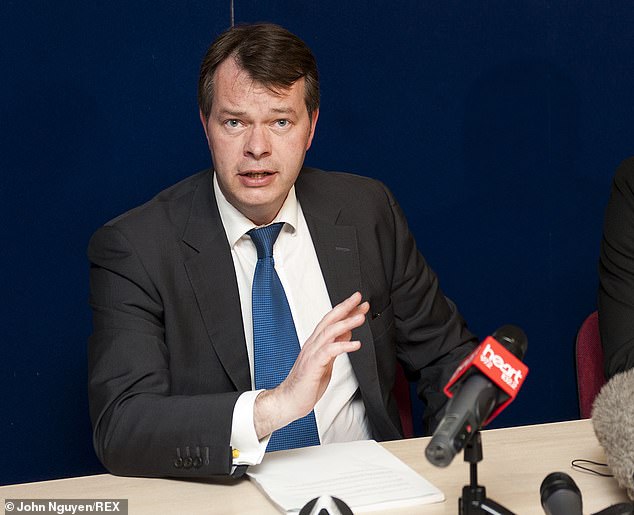 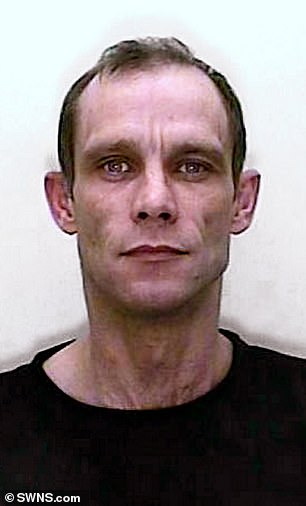 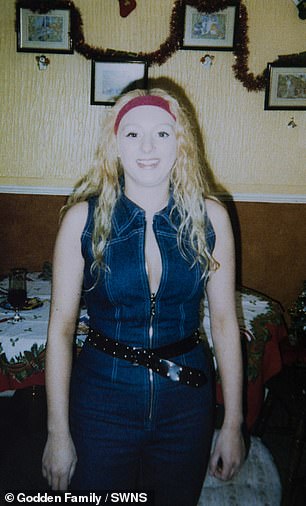 Christopher Halliwell, who was sentenced for the murder of Sian O’Callaghan in 2012 and escaped conviction for the killing of Becky Godden-Edwards, right, because Fulcher didn’t read the murderer his rights at the point of confession in 2011

Speaking to Chat magazine, Edwards said: ‘Since the trial, our family has kept in touch with Steve Fulcher and his wife Yvonne. They’ve actually become good friends of ours.’

She added: ‘I never blamed him. He brought Becky back to me’.

Fulcher explained at his misconduct trial that he had been keen to lead Halliwell to the spot where the killer said he’d buried Becky and that’s why he hadn’t escorted him back to the nearest police station, as regulations dictate, to formalise his confession.

At just 4ft 11in tall and slightly built, Becky was no match at all for Halliwell the man who decided to kill her and dump her body in a Gloucestershire field.

No one really knows why he did it — or even when. Edwards only knows that some time between 2002 and 2003, when her daughter was 21, her path crossed with taxi driver Christopher Halliwell and she was never seen again.

Earlier this year, Karen was invited onto the set as filming got underway on an ITV drama based on the story of how Becky’s killer was caught and the extraordinary legal saga that led to his conviction.

A Confession starred actor Martin Freeman as Fulcher, who managed to achieve what no policeman before him had been able to do – bring Becky home and identify her killer – but who was sacked as a result.

Karen’s dogged campaign to bring Halliwell to justice turned into one of the most astonishing sagas in British legal history.

For the fact that Becky was dead — not estranged from her family, not wanting-to-be-missing — only became apparent when her killer was being questioned about the disappearance of another young woman, 22-year-old Sian O’Callaghan, who had failed to return home after a night out in Swindon in March 2011.

When cornered by detectives, Halliwell admitted that he had killed Sian and led them to her body. Then he turned to the officer in charge, DS Steve Fulcher, and said: ‘Do you want another one?’ He then told them where he had buried Becky many years earlier. 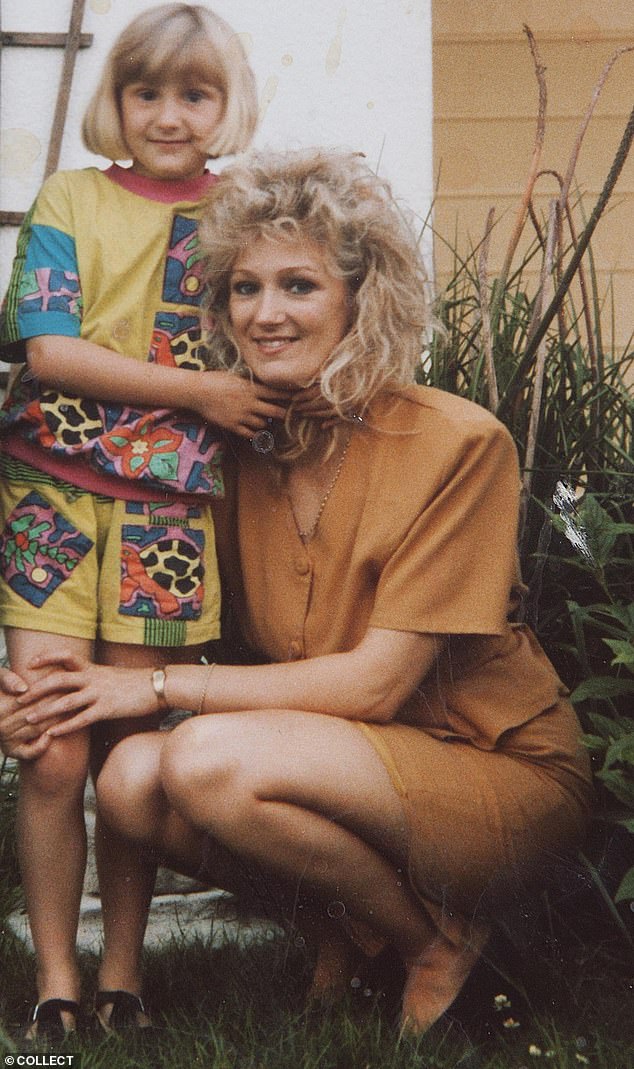 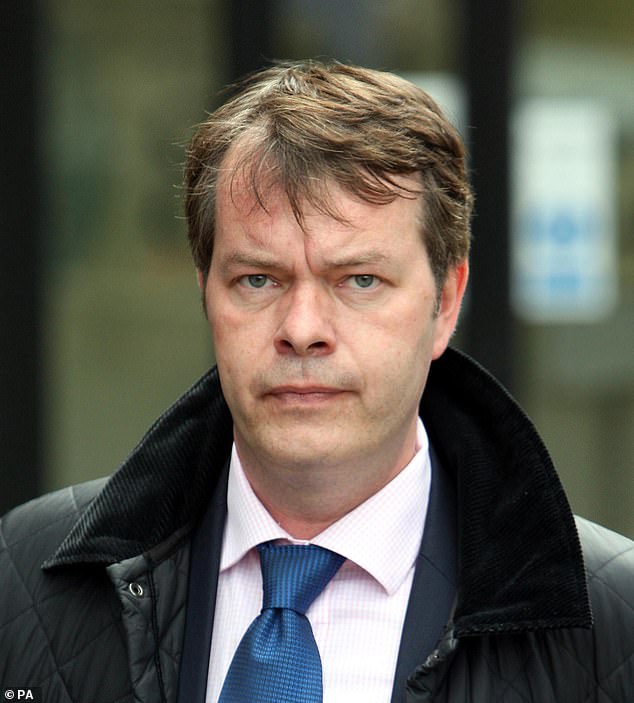 What should have been a straightforward double murder investigation became much more complicated as the trial got underway.

The reason? Halliwell’s confession to Becky’s murder had been given without him being reminded of his rights by DS Fulcher — subsequently described, wrongly, as a ‘police blunder’ — meaning he couldn’t be held to account for killing Becky.

In October 2012, Halliwell was sentenced to life for Sian’s murder — but not Becky’s. Karen had to fight like a warrior to bring him finally to justice.

Under the PACE code of practice (relating to The Police And Criminal Evidence Act of 1984), DS Fulcher should have taken Halliwell straight back to the police station as soon as he confessed to Becky’s murder.

Instead, seeing a ‘window of opportunity’, he’d driven him to the field where Halliwell claimed another body would be found.

That decision cost DS Fulcher his career. In 2014, he was found guilty of misconduct at a disciplinary hearing. Later that year, he resigned, his police career over.

Not once has Karen, a beautician, blamed the detective for jeopardising the pursuit of justice for Becky. Quite the opposite — the two remain close to this day.

‘That man is a hero. He brought Becky home — if he hadn’t done what he did, Halliwell would never have shown him where she was.

‘If it hadn’t been for DS Fulcher, Becky would still be in that field, and I would not know if my daughter was alive or dead.’

Mother Karen Edwards (left) clung for eight years to the hope that her daughter Becky was still alive. Imelda Staunton (right) played Karen in the ITV drama ‘A Confession’

Karen has written a book, telling the story of her daughter’s short and troubled life, and attempting to make sense of what happened.

Born in April 1982, a little sister for Steven, Becky was a sensitive child who was deeply affected when her parents split up when she was six.

At school, her shyness made her a target for bullies. Karen remembers one incident where dog dirt was smeared on her cardigan and she was made to put it on.

Before she was 12, Becky had attempted suicide, was self-harming and had been referred to a child psychologist. ‘I could not believe it was happening — not to my little girl,’ says her mother.

Yes, there were happy family memories, too; Karen says Becky was thrilled when she remarried in 1997, adored her stepdad, Charlie, and was a proud bridesmaid. But there were also dark times.

As she moved through her teens, she fell in with a bad crowd and started inhaling solvents; then she moved on to heroin.

By then, all Becky’s ambitions of becoming a vet had gone and she dropped out of school.

Over the coming years, Karen’s whole life became about getting Becky help, or dealing with the fallout from her addiction. Time after time, she went to drug dens and dragged her home.

She tried to keep her off the streets, too, supporting her when Becky insisted she was going to get clean. She so wanted to get her life back, Karen insists.

‘She hated what it was doing to her, to me, to everyone. But she still went back, every time.

‘Afterwards, I know everyone was asking how a clever girl from a loving family could end up as a sex worker, in a shallow grave in a field, and I’ve asked that question myself a million times.

‘I feel I failed her. Any mother would. But it was the drugs that failed her. They left her vulnerable to monsters like Halliwell.’

Karen last saw her daughter in 2002, on that day they’d been in court. Afterwards, with a fine and a criminal record, Becky asked her mother to drive her to see a boyfriend. ‘I had to — I knew she would go anyway,’ Karen says.

It was the last time she would see Becky alive.

In the coming weeks and months, she expected Becky to walk in the door at any moment.

‘She’d gone off before, but she’d always remembered Mother’s Day and birthdays,’ she recalls. ‘But this time there was silence.’

Weeks became months. Then years. Karen searched, of course. She went back to the streets, looking for Becky, and got in touch with the police — twice.

‘But the situation was confused. There were members of the family — on her dad’s side — who said they had seen her. ‘Her grandfather insisted he had seen her on a bus and she’d got off and given him a hug. Someone else said she was running a club in Bristol.

‘I got in touch with all the clubs — nothing. But because there had been supposed sightings of her, the police said they couldn’t register her as a missing person.’ 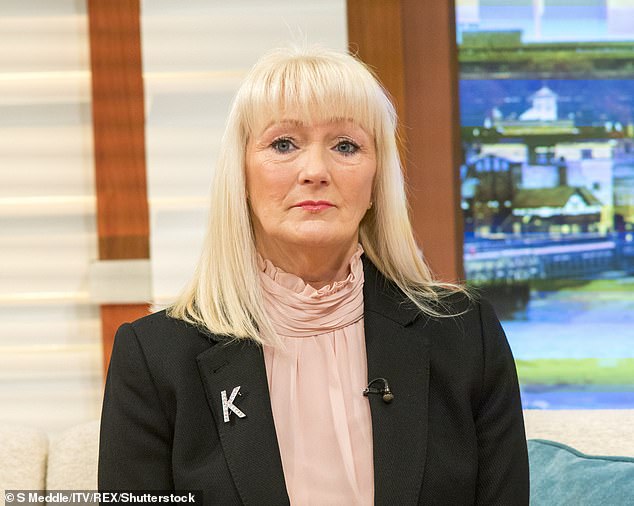 Edwards’ determination to get a conviction for her daughter paid off. Halliwell, now serving life for killing Sian, was convicted of Becky’s murder in September 2016 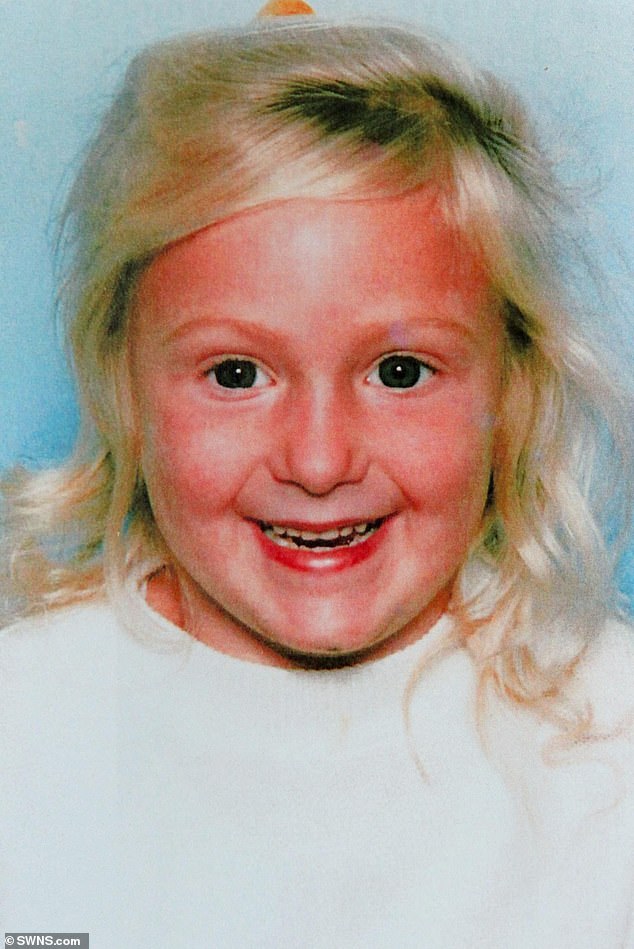 Speaking about her daughter’s addictions, Edwards said: ‘So many times I had tried to fix Becky, and I couldn’t. I had to let her go’

Yet Karen thought about Becky constantly. She wrapped gifts every birthday. She got in touch with the Salvation Army, with Missing Persons charities. But without official Missing Person Status their hands were tied. Then, suddenly, the police were at the door, with the most devastating news.

Not only was Becky dead, but she had been for years. Coincidentally, the mother of Sian O’Callaghan, the other girl Halliwell killed, lived just around the corner from Karen.

The manner in which their daughters’ disappearances were treated, however, could not have been more different.

Sian vanished as she walked home from a nightclub. A nice girl who had never been in trouble, her disappearance was immediately deemed out of character, and police acted quickly.

Using her phone signal and sightings of a taxi, they arrested Halliwell within days.

‘Sian was always the “good girl” in this story — and we were kind of dismissed. But Becky always mattered, too,’ Karen says.

‘After Halliwell got life for Sian’s murder, the police told me there wasn’t enough evidence for him to be charged over Becky, but they hoped I’d be satisfied he was going away for a long time.

‘Satisfied? That he’d got away with killing Becky? Never.’

Actually, the evidence to convict him was there. A spade, removed from Halliwell’s home, was, years later, found to contain soil samples linking it to the field where Becky lay. Witness statements were taken that put him near the scene.

So why the delay? There are so many questions Karen still needs answers to. An official report into a formal complaint about how her case was handled is still pending.

She started her own petition to have charges brought, trudging streets to collect signatures. She convinced her local Asda to let her stand outside the store to engage with shoppers. Not only did they agree, they offered her a table in the foyer, so moved were they by her story.

Her determination paid off. Halliwell, serving life for killing Sian, was convicted of Becky’s murder in September 2016.

Understandably, Karen is still furious that the efforts of the police in the years following the discovery of Becky’s remains were focused on taking action against DS Fulcher, rather than making sure the killer was held to account.

She sat with Becky’s coffin for three weeks while the funeral was arranged. She didn’t want a ‘big black funeral’. ‘We were never going to be able to give Becky the wedding she would have wanted, but I wanted her funeral to reflect that side of her.

‘She had a white wicker coffin and Stargazer lilies.’ The music played as they said farewell to Becky was Coldplay’s Fix You, an apt choice.

‘So many times I had tried to fix Becky, and I couldn’t. I had to let her go. My only comfort was that she was at peace. She wasn’t lying in a field, alone, forgotten. We had her home, where no one could hurt her any more.’

Karen’s book, A Killer’s Confession, is published by Headline at £20