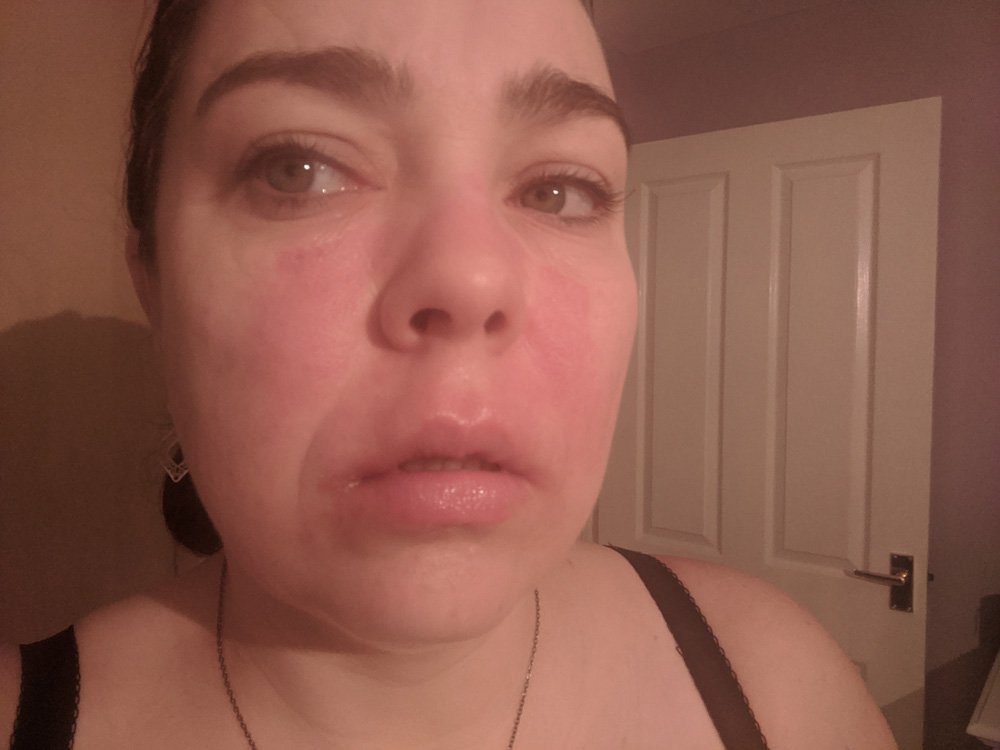 A widowed mum whose confidence was destroyed by painful facial welts is jumping into dating again after a £49 cream cleared her skin.

When the mysterious rash that had blighted her childhood returned with a vengeance, during flare ups Samantha Smith, 47, avoided friends, only leaving the house to go to work or do the school run with her 12-year-old son, Morgan.

Desperately self-conscious, she would make up excuses to avoid seeing people and, despite being single after losing her fiancé Steve Kirkden in 2009, felt dating was out of the question.

Then, in February 2020, executive assistant Samantha, of Redditch, Worcestershire, decided to try a cream she found online – and within weeks, her skin had cleared.

During a bad flare up after being under extreme stress due to Steve’s passing (which happened every few weeks and would last for months) Samantha found her confidence in tatters.

‘When my skin was bad, I wouldn’t socialise. I wouldn’t go out apart from work, the school run and the supermarket – only essential visits. I was incredibly self-conscious,’ she said.

Without Steve, Samantha felt she did not have anyone to confide in, but on a late-night trawl of the internet, discovered Medovie, a skincare range for chronic conditions.

Medovie claims that using three botanics commonly used in Chinese medicine, they can reduce symptoms of skin conditions that can’t be cleared up with traditional methods.

With low expectations, she booked an online consultation for February 2020 after which she ordered the cream, which is made up of natural ingredients.

Within weeks, her skin was softer and the red, sore patches on her cheeks had all but disappeared.

Now, 12 months on, during which time Samantha’s skin has stayed consistently clear, she feels ready to rejoin the dating world, and has set up an online profile.

Feeling ready for romance once again, she said: ‘Dating wasn’t on the agenda at all before.

‘I would never have done online dating, as I was too worried that a flare up would make me look different from my photos.

‘But now, I think it’s something I’m ready to tackle. I’ve set up a dating profile and have been on a couple of socially distanced walks with potential matches.

‘When we come out of lockdown, I would like meet somebody special.’

Samantha’s skin problems began when she was around eight, with red rashes spreading across her face.

Her mum, Annie, took her to see a dermatologist, who suggested it could be dermatitis or eczema.

She recalled: ‘My skin was so bad on my face that the dermatologist decided to bring in a team of trainees to have a little poke and prod – and I ended up fainting.

‘I suffered a lot with sore patches when I younger. I’ve always had sensitive and troublesome skin but the older I got, the worse my skin got.’

Though Samantha’s symptoms persisted, she was enjoying a period of relatively clear skin when she met her late partner Steve in 2000, aged 26.

She continued: ‘We met through my brother. Steve was living in Worcester but came to London to take me on a date.

‘I remember spotting him walking up the street, and me and the girls from my office were giggling and watching him from the window.

‘At the time, my skin wasn’t as bad. I’d have patches that came and went but it was much more manageable.’

Falling in love, the pair set up home together and were engaged to be married when Samantha gave birth to their son, Morgan, in January 2009.

‘Suddenly I was very busy,’ she said. ‘I was a widow, working and raising a child. Over time, my skin got really bad.’

From there, Samantha, who has never had a formal diagnosis, went back and forth to various specialists, but doctors remained baffled.

To make matters worse, the ointments she was prescribed to ease the angry red rash only seemed to exacerbate it.

She said: ‘It was all steroid creams. My face was so sensitive anyway that they weren’t doing it any good.

‘When the rash flared up it was very aggressive and painfully sore, to the point where I couldn’t even wash with plain water…

‘Us girls like to put a bit of makeup, but I just couldn’t do anything to make myself feel presentable. I couldn’t wear any foundation as it’d sit on the top of my cracked skin.’

Due to the pandemic, she has been limited to taking social distanced walks with potential suitors, but is looking forward to dating properly when life returns to normal.

Samantha has been shocked by the changes in her skin since trying Medovie, saying: ”I’d lost hope of finding a solution so I’m still in disbelief.

‘The key thing for me was that the founder of Medovie took the time to video chat with me. Throughout the first three months of use, they checked in on me so much and were so attentive.

‘All that time I spent at home, too self-conscious to leave the house – it’s only now I look back, that I realise how much I was missing out on. I’m making up for lost time.’