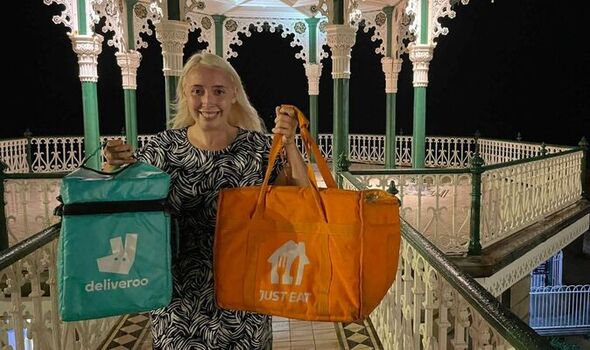 A mum-of-one who earns £1,000 a week as a delivery driver completed a challenge where she worked for 24 hours straight, making 77 drop-offs and raking in £330. Atlanta Martin left her job as a flight dispatcher last year after learning she could make more money as a delivery driver.

The 22-year-old was joined by her boyfriend, Benjamin Hasker, 36, who also works as a delivery driver.

The couple decided to set themselves a challenge of delivering packages for 24 hours straight.

Starting at 7am on a Tuesday morning, the pair set off delivering orders from Just Eat, UberEats, Beelivery, Deliveroo, and Gophr across Worthing in Sussex from their car.

At 10pm, they switched to delivering only for Uber Eats and Deliveroo across Brighton, and they continued through the night until 7am on the Wednesday morning, when the challenge was over.

The two kept themselves going by taking turns driving and eating Domino’s, fizzy drinks, and croissants while occasionally stopping at a local McDonald’s for a toilet break.

The hard work paid off for the couple as they earned a whopping £330.16 during their 24-hour challenge that saw them travel an exhausting 220 miles for 77 deliveries.

Delivery driver Atlanta, who lives in Worthing with her four-year-old daughter, said: “I’ve wanted to do this as a challenge for a while.

“When I first looked into doing it, the only place where you could really do 24 hours of delivering was London, but as deliveries have become more available, you can now do it in Brighton.

“I had Ben with me so we motivated each other and took turns driving – I’m not a morning person so already struggled getting up for 7am and Ben drove a lot in the night.

“I didn’t realise how much caffeine affected me but I was so tired in the night and then had a Diet Coke and suddenly had this burst of energy which was really helpful!

“We kept going to a 24 hour McDonald’s for the toilet, and we had a Domino’s at about 11pm which was amazing. 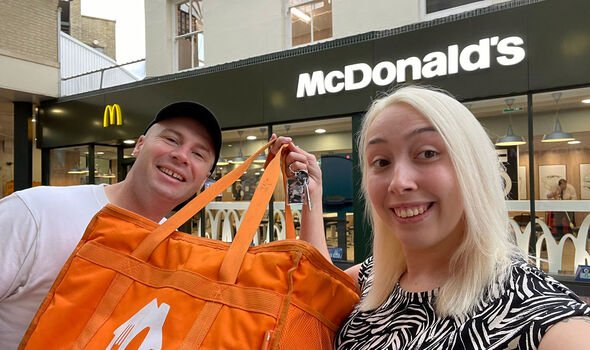 “We got a croissant from Budgens at 6am – that kept us going in the final stretch.

“We wanted to see what it was like delivering at night and it was actually the busiest between about midnight and 5am, despite it being midweek.

“Most of the deliveries at that time were alcoholic drinks, which wasn’t very surprising, and they were really easy to pick up, always ready to go when we arrived so there was no waiting about.

“We used my apps for the deliveries and then just split the money at the end – it wasn’t really about the money, it was more of a challenge, but of course the money helps!

“It was really tiring, but I would probably do it again, we made about £330 and travelled 220 miles but it was fun and a great challenge.”

Their most lucrative app was Uber Eats where they earned a whopping £161.19 and they also received £12.35 from grateful customers.