Mudcat Grant, who helped take the Minnesota Twins to the 1965 World Series when he became the American League’s first Black pitcher to post a 20-win season, has died at 85.

The Twins announced Grant’s death on Twitter but did not immediately provide details.

Grant led the American League in victories, winning percentage and shutouts in 1965 and pitched for 14 major league seasons.

He was remembered as a leading right-hander of his time, but also for his intriguing nickname, his second career singing and dancing at nightspots, and his book profiling outstanding Black pitchers.

Grant, a two-time All-Star, was a mainstay in the starting rotation for the Cleveland Indians and the Twins for much of his career, then became a reliever, most notably with the Oakland A’s and Pittsburgh Pirates.

The Indians traded Grant to the Twins in June 1964. His best season came the following year, when he went 21-7, turned in a winning percentage of .750 and threw six shutouts. He pitched two complete-game victories against the Los Angeles Dodgers in the World Series, losing once, and hit a three-run homer as the Dodgers went on to win the series in seven games.

By his account, Jim Grant acquired his nickname at an Indians tryout camp in 1954 through a combination of racial stereotyping and disregard for his geographical roots. Mudcat was the informal name given to large catfish found in muddy streams, especially in the Mississippi Delta, though Grant was born and raised in Florida.

As a youngster, Grant performed in a choir. Following the 1965 World Series, he founded Mudcat and the Kittens, a song and dance group that played at nightclubs and hotels during the off-seasons and that also gained international bookings.

“First his musicians — up to seven of them — begin, playing dance music and jazzier stuff, and then the Kittens, some very sexy girls in spare feline outfits, take over the stage to sing and dance and purr,” Frank Deford wrote in Sports Illustrated in 1968. “Then Mudcat comes on. He sings — everything from show tunes to rock ‘n’ roll — and tells jokes and dances.”

“I made way more money in music than I did in baseball,” Grant once said.

James Timothy Grant Jr. was born on Aug. 13, 1935, in Lacoochee, Fla., a town some 40 miles north of Tampa. He grew up in a poor family amid rigid segregation.

His father, who worked in a lumber mill, died of lung disease when Jim was a child. His mother, Viola, took a job in a citrus canning plant to provide for the family. At age 13 or so, Grant played third base for a local semipro team but also worked part-time in a mill.

Grant was a third baseman and pitcher and also played football and basketball at Moore Academy, a Black school in Dade City, Fla., then received an athletic scholarship to the historically Black Florida A&M. He played mostly third base in college, where he was also a reserve running back. He left in his sophomore year to help his family financially, working as a carpenter’s helper.

When a scout for the Indians who had been impressed by his play in high school learned that Grant had dropped out of college, he recommended him to the Cleveland organization.

He was still a teenager when he was signed by the Indians for their farm system in 1954. Converted to pitching full time, he advanced through the minors and made his major-league debut in 1958. His best season with the Indians came in 1961, when he was 15-9 and voted to the All-Star team for the first time.

When Grant reached the major leagues, Black players were often barred by hotels and restaurants at spring training sites in the South and even in some major-league cities.

They largely avoided speaking out on racial issues, but Grant found ways to assert himself and expose teammates to Black America. When he was refused service at a lounge frequented by white teammates on his farm team in Reading, Pa., he came back night after night following home games and sat there in a silent protest, though he never did get served.

He later attended civil rights rallies. One night, he took three white teammates to the Apollo Theater in Harlem to see James Brown, and Gladys Knight and the Pips.

“After that, they didn’t mind going among Black people,” he told Steve Jacobson in “Carrying Jackie’s Torch: The Players Who Integrated Baseball — and America” (2007). 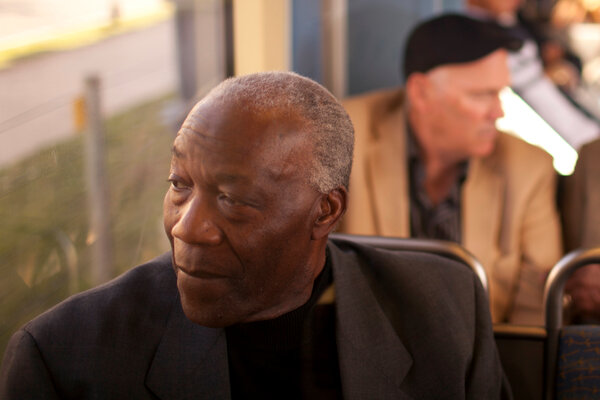 In mid-September 1960, Grant was involved in an incident with racial overtones that received national attention.

He was in the Indians’ bullpen at the outset of a home game and was singing the national anthem when he provided his own take on the words “land of the free and the home of the brave.” As he told The Associated Press after the game, he sang “something like, ‘This land is not so free, I can’t even go to Mississippi.’ ”

The bullpen coach, Ted Wilks, objected to Grant’s wording and got into an argument with him. Grant then went to the clubhouse and left the ballpark, later saying that Wilks had made a racist remark.

Sporting News reported that Wilks had tried to apologize as soon as he made the remark, but Grant wouldn’t accept it. He was suspended for the last two weeks of the season for leaving the ballpark without permission though he quickly apologized to his manager, Jimmy Dykes, for having done that.

Grant was a TV analyst for Indians games in the 1970s and supported groups fighting childhood illiteracy and drug use.

Information on survivors was not immediately available.

Grant’s experiences with racism and his interest in Black history inspired him to write “The Black Aces: Baseball’s Only African-American Twenty-Game Winners” (2006).

The book, a collaboration with Tom Sabellico and Pat O’Brien, profiled 13 Black pitchers, including Don Newcombe of the Brooklyn Dodgers, who, playing in the National League, was the first Black 20-game victor, having achieved that distinction in 1951.

“At certain points in our past, we didn’t have a lot of African-American pitchers,” Mr. Bush said. “I want to thank you, Mudcat, for showing courage, character and perseverance, and also thank you for setting an example.”