MONEYSAVINGEXPERT has revealed its top Christmas deals and sales predictions so bargain hunters know exactly when to shop.

The consumer site's helpful shopping tool is back to let shoppers know when it expects retailers, including Argos and Disney, will drop prices. 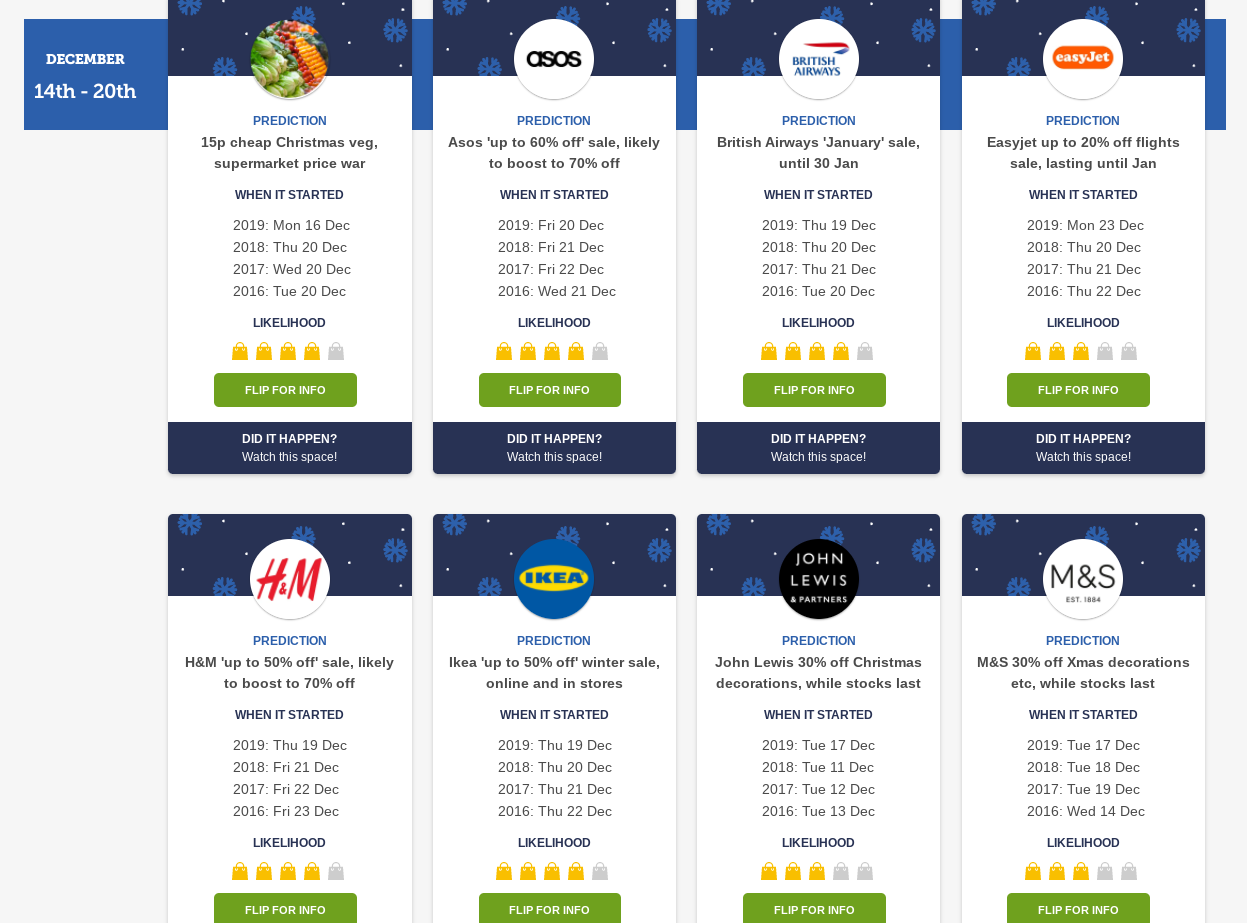 It's based on seven years' worth of deals watching – last year, 63% of the predictions were spot on, while 89% were correct within a day or two.

Once again, it looks like the best deals are to be had in the final week before Christmas, aside from Black Friday, when many retailers boost their sales.

For the past four years, Argos has knocked up to 50% off prices on Christmas day and MSE reckons it will do the same this year.

Boots is expected to cut prices in half on Christmas Eve again this year, after doing it on the same day annually since 2016. 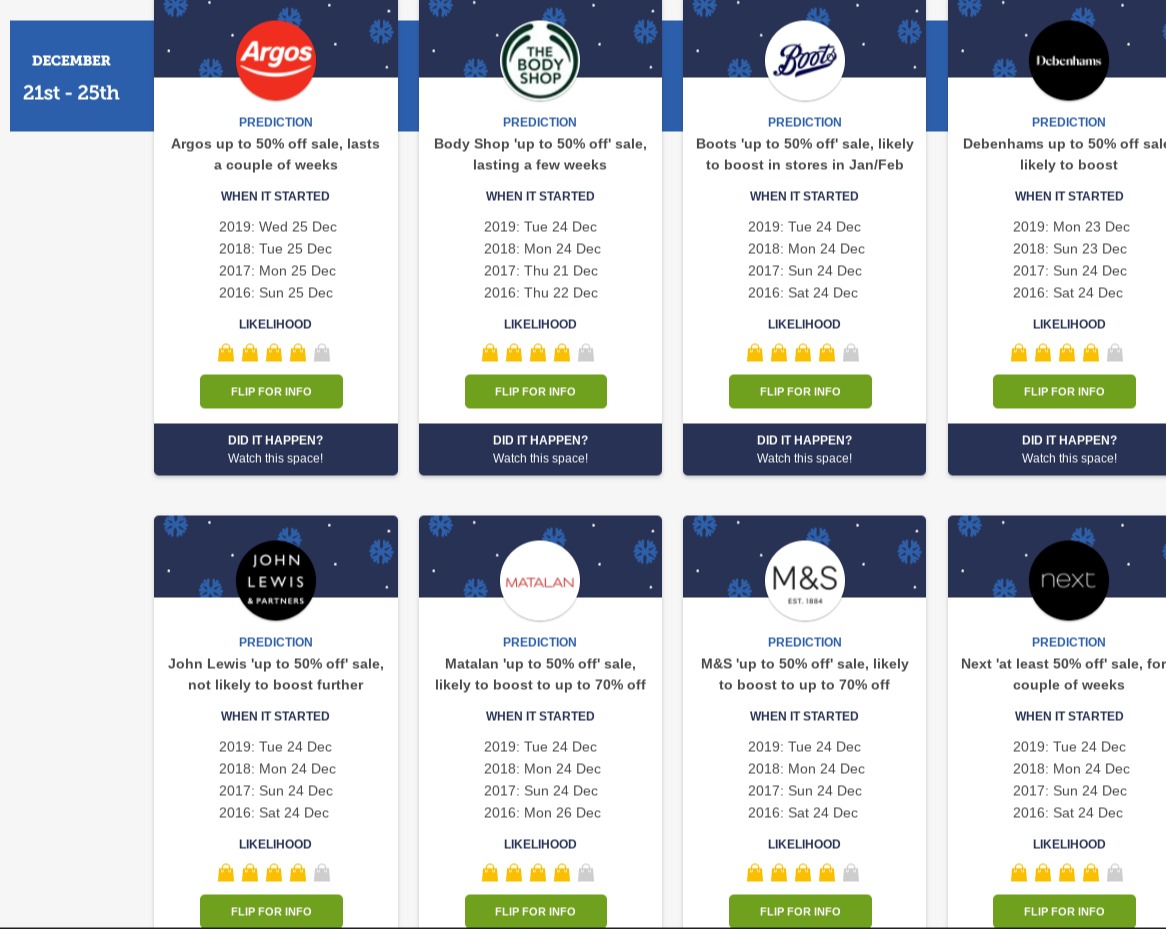 The pharmacy and health brand normally boosts these sales even more in its highly anticipated 70% off January deals event.

John Lewis and Next are also expected to halve prices on December 24 in 2020, like they have done for the last four years.

Some of these deals may be too late to cash in on ahead of Christmas, especially as there is uncertainty whether shops will be allowed to reopen by then.

England's current coronavirus lockdown is due to end on December 2 but the government has said the Tier system will be reintroduced, enforcing local lockdown restrictions.

Many of the best deals are usually found in store but it's not clear if retailers will be moving them online this year, particularly if shoppers aren't able to go to a branch.

There's still time to shop in the Black Friday sales though. The spending spree doesn't officially start until November 27 but many retailers have already kicked off the sales, including Amazon.

The MSE predictions tool reckons there are still some decent Black Friday deals to come.

Disney fans should keep an eye out around November 27 as ShopDisney is expected to cut online prices by up to 20%, for three days.

Matalan is predicted to slash prices by up to 50% too in a week-long sale around the same time – November 23 to be specific.

But shoppers who miss out on the Black Friday deals will still be able to pick up some bargains from the first week in December.

How to compare prices to get the best deal

JUST because something is on offer, or is part of a sale, it doesn’t mean it’s always a good deal.

There are plenty of comparison websites out there that'll check prices for you – so don't be left paying more than you have to.

Most of them work by comparing the prices across hundreds of retailers.

Here are some that we recommend:

The consumer site reckons Topman will hold its annual 20% off for 48 hours flash sale starting on December 3.

Shoppers hoping to bag a bargain No7 beauty Star Gift set from Boots should expect prices to drop in the second week of December.

In previous years, the sets have been sold for half price between December 11 and December 16.

Ikea and Asos are among the retailers expected to slash prices between December 14 and December 20.

Traditionally, fashion house Asos has cut prices by up to 60% – sometimes boosting it to up to 70% off – between December 20 and 22.

Ikea has been known to launch its up to 50% off winter sale the Thursday before Christmas, which this year falls on December 17.

Of course, it's worth remembering that this year shoppers are being advised to order gifts earlier than usual if they want them to arrive before December 25.

Retail bosses have also warned the lack of clarity over when national lockdown measures will end may cause delivery chaos.

It's worth bearing in mind that by holding out for the deals you risk not getting them in time for the festive break.

Plus, this year, Brits may be restricted to spending the festivities in certain household bubbles to limit the spread of Covid-19.

It could leave many people relying on the postal service to send presents to friends and families they won't be able to see over the festive period, which could cause further delays.