Mom Moment! Amanda Seyfried Thanks Her Kids and Dog After Emmy Award Win

One proud mama. Amanda Seyfried thanked her kids and her beloved dog, Finn, during her emotional acceptance speech at the 74th Primetime Emmy Awards.

“This is a really nice feeling,” the Dropout star, 36, said after winning Outstanding Lead Actress in a Limited or Anthology Series or Movie on Monday, September 12, for playing disgraced Theranos founder Elizabeth Holmes. After thanking creator Liz Meriweather and the cast and crew, Seyfried shared a sweet message of gratitude for her loved ones. 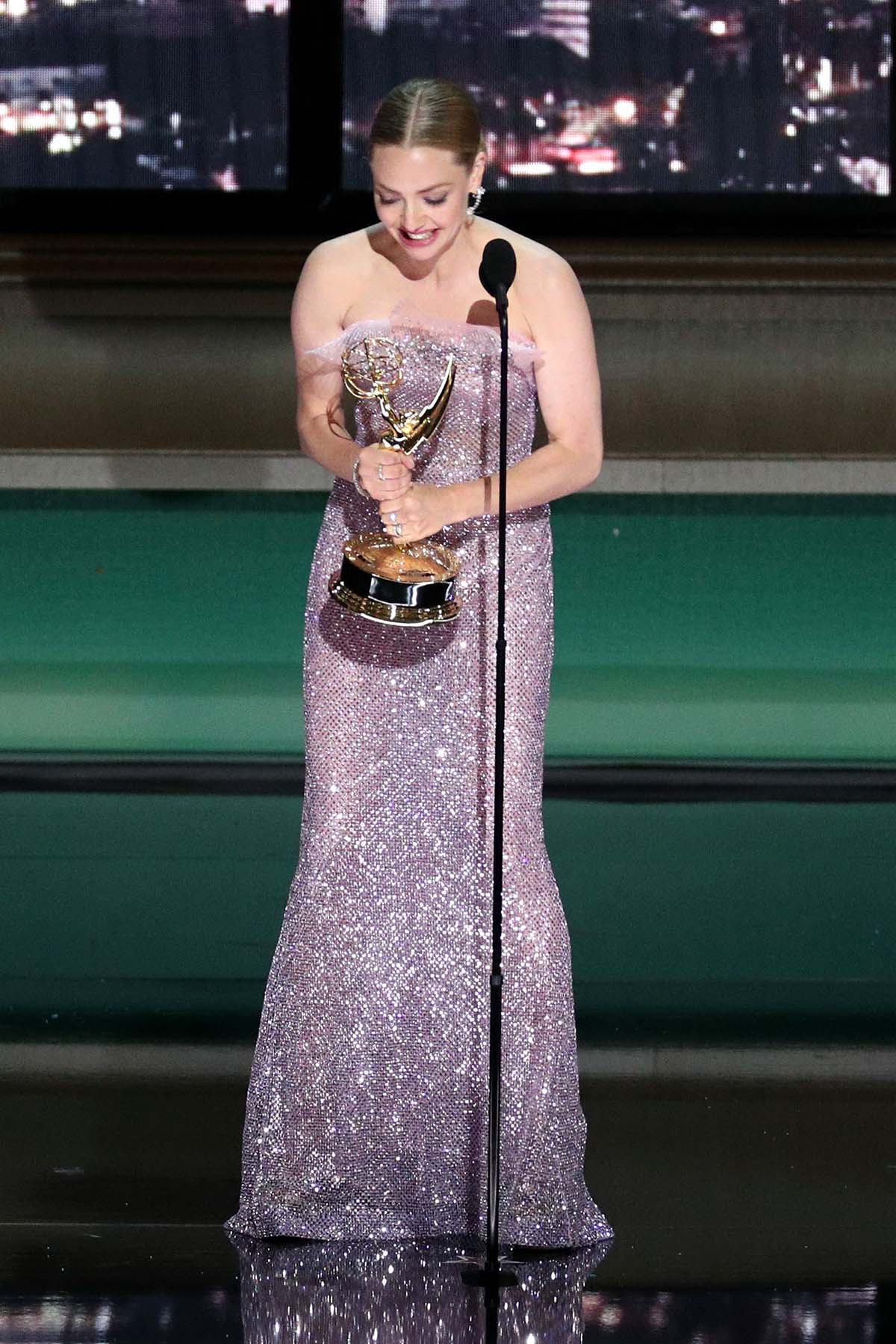 “Hi! Bubs, you gotta go to bed now, but thanks!” the Mean Girls star said, addressing the two children she shares with husband Thomas Sadoski. “Thank you, my family. [Thank you to] my mom, my husband, my dad and my kids — and my dog Finn! Thank you so much.”

The Newsroom alum, 46, was equally emotional when Seyfried was announced as the winner, grabbing his wife’s face and giving her a passionate kiss as they stood up from their seats. Sadoski also appeared to be holding back tears as he accompanied the Big Love alum to the stage to accept her award, before cheering her on from the audience. 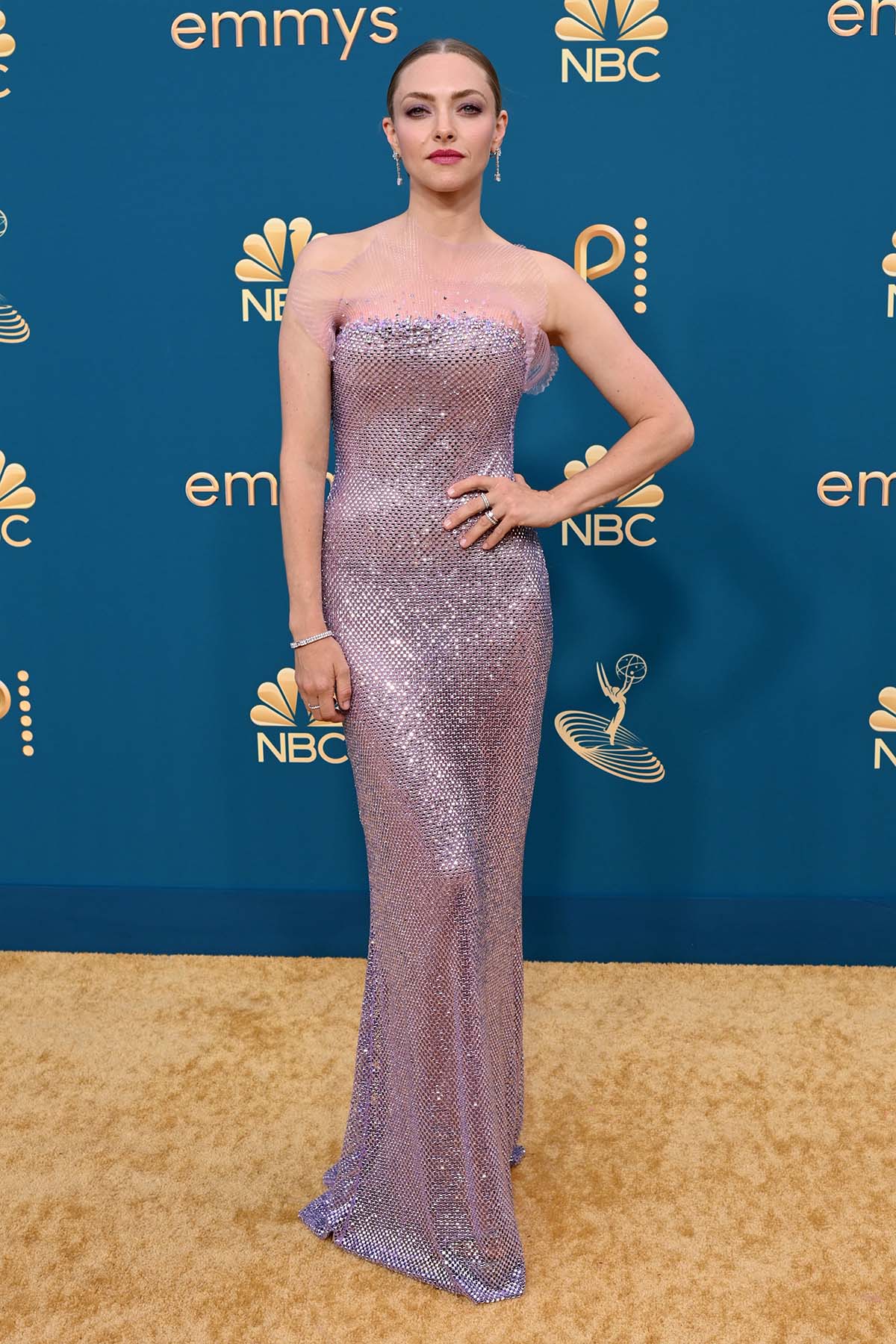 Us Weekly confirmed in September 2016 that the couple — who met in the year prior while starring in the Off-Broadway play The Way We Get By — were engaged after a whirlwind romance. Seyfried and Sadoski secretly tied the knot in March 2017 when she was nine months pregnant. The Mamma Mia! star gave birth to daughter Nina two weeks later.

“I really wanted to have rings on in the hospital, you know?” Seyfried told PorterEdit in July 2018 about why she wanted to get married before they welcomed their daughter. “And what if something goes wrong, and he’s not legally my husband?”

Stars Packing on the PDA at the Emmys Through the Years

She added that the ceremony was a low-key event followed by brunch at Cheebo in Los Angeles. “We got married in Topanga, March last year,” she said at the time. “Just the two of us. And afterward, I was like, ‘Can we just go to Cheebo?’ It was awesome.”

The pair announced in September 2020 that they had welcomed a second child in a statement via the organizations INARA and War Child. “Since the birth of our daughter three years ago our commitment to the innocent children that are so brutally affected by conflict and war has been a driving force in our lives,” the twosome wrote at the time. “With the birth of our son the work of INARA and War Child has become our North Star.”

Love on the Carpet! The Best Emmys Couple Style Moments of All Time

Seyfried’s shout-out to her pooch was particularly special as she revealed earlier this year that he had completed his final round of chemotherapy. “So this is a big day for us because … Congratulations Finny, it’s your last chemo,” the Pennsylvania native shared via her Instagram Story in July. “No more chemo! This is his sixth and final chemo [round today.]”