Memories of another terrible virus from the recent past

Les Solomon has staged five productions of Three Winters Green by Campion Decent since its 1993 debut, dedicating a steady portion of his time to keeping the play, a snapshot of Sydney life during the AIDS crisis, part of the theatrical conversation.

Joined by Decent as co-director, in the tiny Fringe HQ venue, Solomon skips the subtlety to meet his mission. The set consists of an oversized red ribbon (the universal symbol for HIV awareness) which spills out into red blocks; everything happens under its gaze. The performers are dialed up in energy and volume, forgoing nuance to shout their fears, sob, and rush towards jokes. It creates a rhythm – something terrible happens, a person erupts, they shake it off and move on; it all starts again. It’s repetitive and a little wearying – but still, compulsively, watchable. 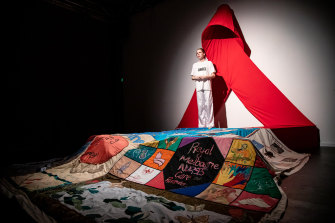 The set consists of an oversized red ribbon until the end of the play when a portion of the AIDS quilt is rolled out.Credit:David Hooley

Nearly 30 years on, the script shows its age. It paints its characters in broad strokes – Jen (Julia Muncs) and Beck (Maddison Silva), a steadfast lesbian couple, suffer the most from this – and it can’t quite manage its competing stories: the redemption of Maxine (Norah George), mother to Beck and Martin (Tom Kelly), who eventually becomes an ally; the friendship between Andrew (Ben Jackson) and straight guy Mick (Kelly); Francis’ (Sebbie Thornton Walker) dangerous flirtation with teacher Joseph (Samuel Welsh) and blink-and-you’ll-miss-it romance with Andrew. The play doesn’t slow down to give any of these stories weight, and since the production is extremely earnest but surprisingly sexless, the end result is perfunctory and gestural. It doesn’t connect.

And yet there are moments. A few lines in Decent’s script still land directly in the throat, unvarnished and unselfconscious. And the prologue and epilogue, set in 2003, suit this production’s reverential tone nicely by offering space for real scale and reflection. In these parts the cast, gloved and solemn, unfurl Block 106 of the Australian AIDS Memorial Quilt.

The quilt and the play are artworks in conversation with each other – records of grief and community and solidarity, dispatches from a time the popular consciousness would rather shove back in the closet.

This production might feel uneven and unpolished, its ragged edges and overplayed sincerity occasionally grating, but there is room to hold space and compassion for the urgency with which it is performed and the queer history it is desperate to impart. We lost so many people. We cannot forget.

TV, movies, Find out the next TV, streaming series and movies to add to your must-sees. Get The Watchlist delivered every Thursday.