This holiday season just got a lot jollier, thanks to Jimmy Fallon and two of his special helpers – Ariana Grande and Megan Thee Stallion.

Mariah Carey got another challenge to her title of Queen of All Christmas Music. Days after Elton John and Ed Sheeran decided to drop some holiday cheer with their new single, Jimmy Fallon decided to get in on the fa-la-la fun….and he wasn’t alone! The Tonight Show Starring Jimmy Fallon host recruited Ariana Grande and Megan Thee Stallion for “It Was A… (Masked Christmas),” a holiday song that could have only come during this time of COVID.

As Jimmy and Ariana sang about wearing masks and waiting for boosters, Megan Thee Stallion appeared as a sexy nurse ready to give them their shots. Check it out above!

Jimmy alerted the world to his new song on Monday (Dec. 6) afternoon. “Guys. I can’t believe I’m typing this but – I’m dropping a new single and video tonight with [Ariana] and [Megan],” he tweeted, along with the single’s artwork. “I am so damn excited!!!” replied Joan Grande, Ariana’s mother. “You are so incredibly cute,” responded Ariana. “Thank you mama!” On Ariana’s Twitter page, she wrote how making the song was “the most fun ever. Love you !!!! both so much.” Megan responded with, “Love y’all.”

Ariana Grande is no stranger to Christmas songs. She’s released two holiday EPs – 2013’s Christmas Kisses and 2015’s Christmas & Chill – and in 2019, she joined Idina Menzel for “A Hand for Mrs. Claus,” off of Christmas: A Season of Love. The following year, Ariana teamed with Mariah and Jennifer Hudson for “Oh Santa!”, a song from the Mariah Carey’s Magical Christmas Special Soundtrack. In fact, “It Was A…(Masked Christmas)” isn’t even Ariana’s only Christmas song for 2021. Kelly Clarkson featured Ms. Grande on “Santa,’ Can’t You Hear Me,” from Kelly’s When Christmas Comes Around… 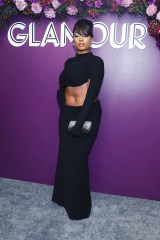 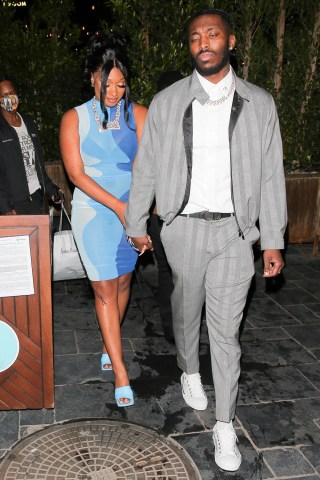 As for Mega, the closest thing she’s come to for a Christmas song is “Savage Santa,” a remix of “Savage” for an episode of The Late Late Show with James Corden. It oddly kind of worked, with Megan rapping some Christmas-themed lyrics along to the “Savage” beat. Hopefully, James Corden doesn’t get too jealous that Megan with playing reindeer games with Jimmy instead of him.

Megan recently spoke with HollywoodLife about her new “Hot Girl Enterprises” Cash By Cash Capp apparel collection, which would make for a great stocking stuffer this holiday season. “We called this collection ‘Hot Girl Enterprise’ for a reason – because it captures my sexiness and sophistication,” she said in the EXCLUSIVE interview. “I’m always working on being the best version of myself, and that’s the message I want to send to all my Hotties with this drop.”