Look inside a billionaire developer's $140 million 'spaceship house' in a Russian forest, which has an underground nightclub and a master bedroom that soars 100 feet in the air

In the middle of a forest outside of Moscow sits a home that looks unlike any other.

Nicknamed "The Spaceship House," the futuristic-looking structure is the only private home designed by legendary architect Zaha Hadid, who died in 2016. It was commissioned by Russian-born billionaire Vladislav Doronin, a real-estate developer and owner of luxury resort brand Aman, who once dated supermodel Naomi Campbell.

Doronin's 36,000-square-foot home, which he calls the "Capital Hill Residence," sits in the Barvikha Forest outside of Moscow and features a master bedroom perched atop a narrow tower more than 100 feet in the air. The lower part of the home, which is partially underground, includes a 65-foot swimming pool, a spa, and a nightclub, Doronin told the Financial Times in 2018.

The residence cost approximately $140 million to build, a spokesperson for Doronin confirmed to Business Insider.

A one-of-a-kind home in a Russian forest nicknamed "Spaceship House" is the only private residence designed by the late Zaha Hadid, an award-winning British-Iraqi architect. 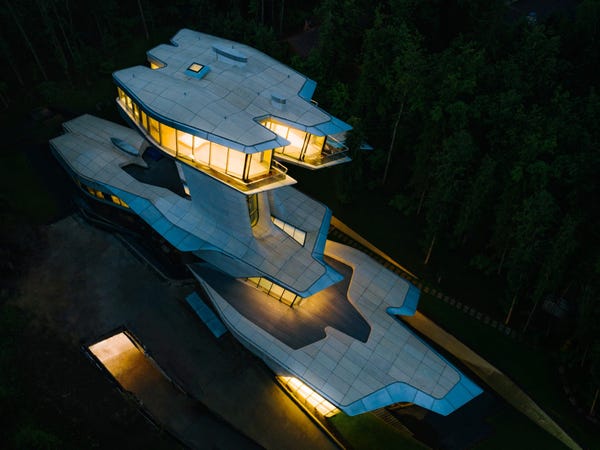 It cost approximately $140 million to build, according to a spokesperson for Vladislav Doronin, who commissioned the home.

Doronin is the billionaire founder and chairman of real-estate development firm OKO Group and owner of luxury resort chain Aman. Instead of its futuristic nickname, Doronin refers to the home as the "Capital Hill Residence."

The first design visuals of the home were seen in 2008, but it wasn't completed until 2018, two years after Hadid died.

Doronin's home sits in the Barvikha Forest on the outskirts of Moscow in the elite suburb of Rublyovka. 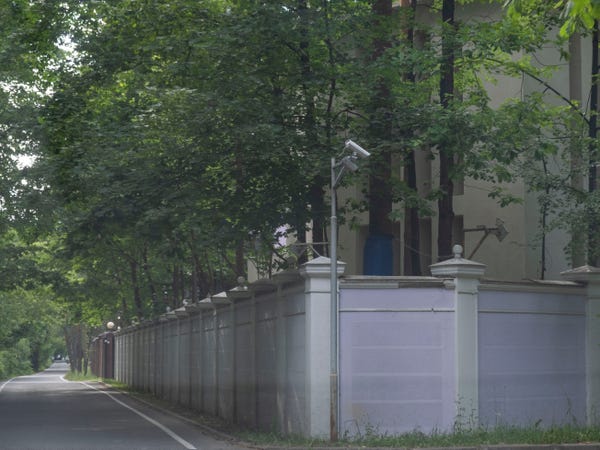 Rublyovka is an ultra-exclusive, leafy suburb that's home to government officials and old money, where homes can cost up to $80 million, according to Leonid Nikitskiy, the head of country real estate at Moscow Sotheby's International Realty.

According to Doronin, he had initially wanted Hadid to design him an apartment building in Moscow, but that project never happened. 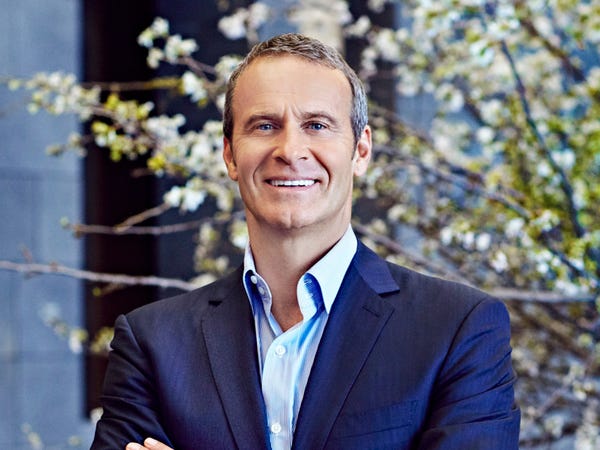 In their business dealings, the two became friends, Doronin said in a 2018 interview with the Financial Times. Hadid referred to him as "the Russian James Bond."

After Doronin bought the land in the forest, he asked Hadid to design him a house there.

"We had lunch at the Wolseley in London and I asked her to build my house," Doronin told the Times. "I said, I want to wake up in the morning and not see anybody, just to look over the top of the trees. 'She drew a sketch on the napkin and I said, 'You're hired.'" 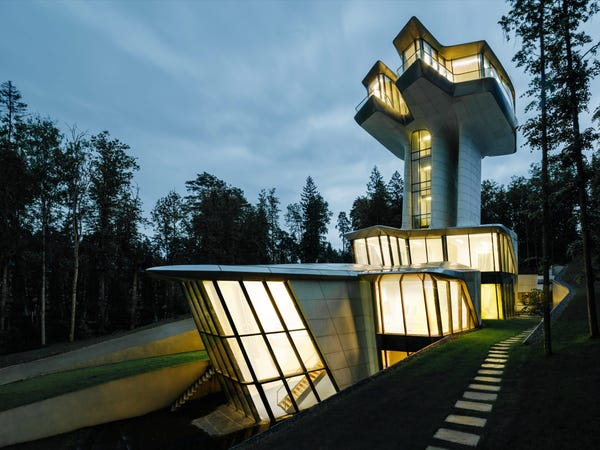 "She wanted this skinny leg," he told the Times. "The contractors and engineers said, 'We can't do this' — but she was right."

Atop the "skinny leg" sits the home's master bedroom, elevated about 100 feet in the air among the trees. 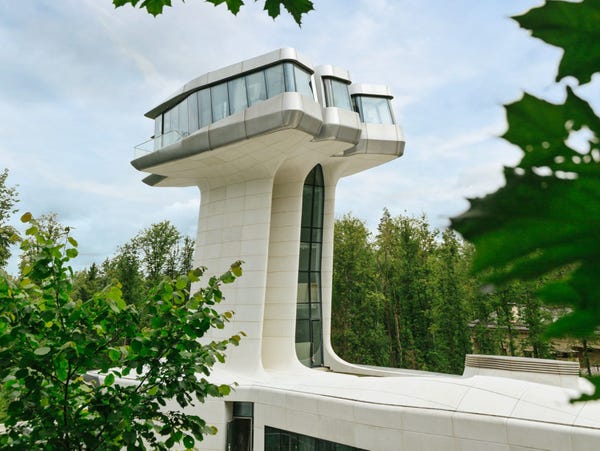 When discussing the designs for the home, Doronin told Hadid, "I want to wake up in the morning and I want to just see blue sky. I don't want to see any neighbors and I want to feel free." 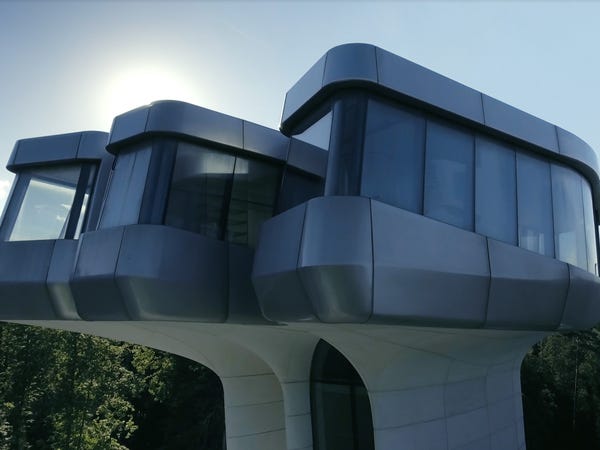 "She told me, 'Do you realize you have to be above the trees?'" Doronin said in a video he released about the project. "And I said, 'Yes.'"

Inside the tower's supporting column is a glass elevator and staircase. 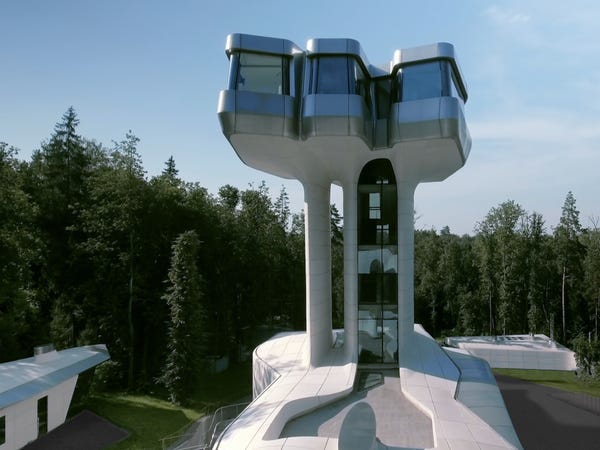 But most of the home actually sits partially underground, as it was built into sloping ground. 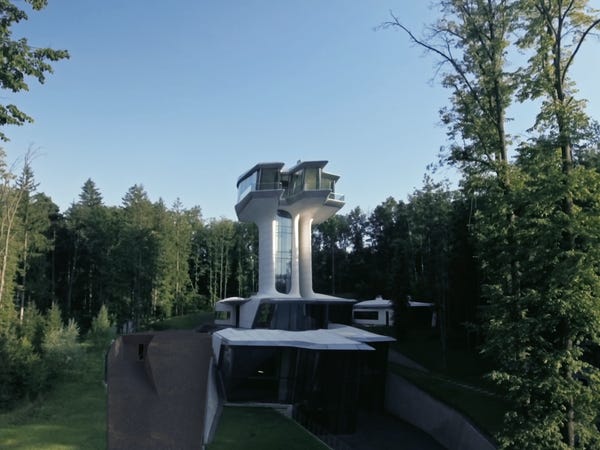 Inside, the residence spans more than 36,000 square feet — but Doronin has only released a single photo of the interior. 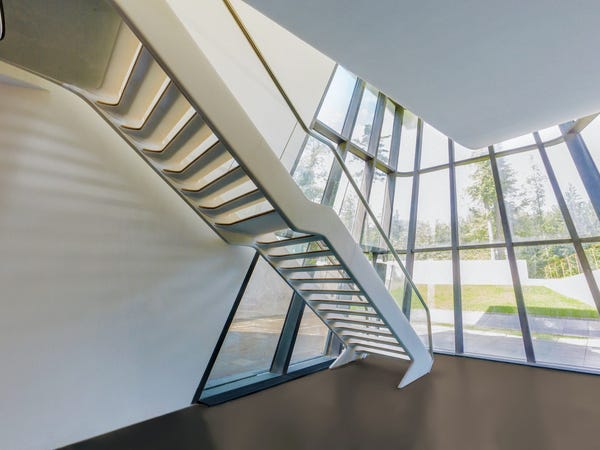 According to Dezeen, the home's lowest level includes "leisure facilities." Doronin told the Times that the partially-underground section of the home features his very own nightclub.

On the ground floor are the living room, kitchen, a lounge, and the swimming pool. On the floor above that is the entrance, guest bedrooms, and a library. 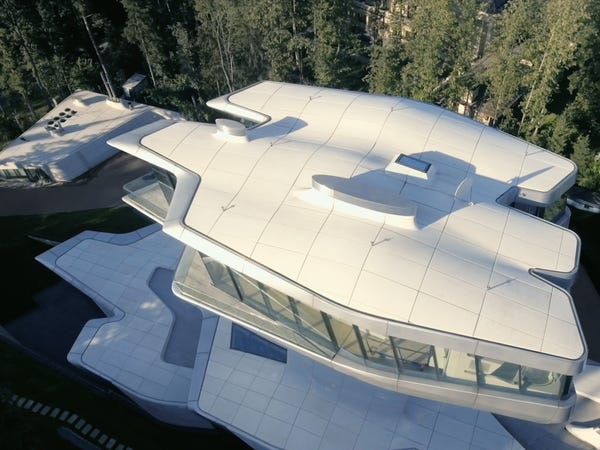 A bird's eye view of the home shows off its unique shape. 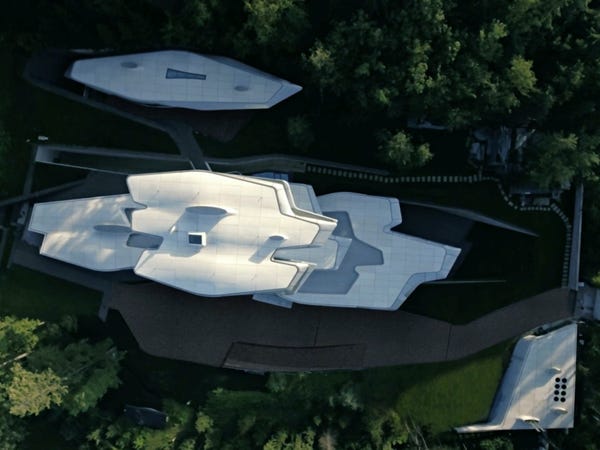 Hadid's former business partner, Patrik Schumacher, who took over her architecture firm after her death, called the Capital Hill Residence "a dream house."

"No architect would refuse such a commission," he said in Doronin's video about the project. Schumacher told the Financial Times that the home "has Zaha's signature features of organic intricacy, complexity, of spatial arrangements, a lot of surprises, a lot of craftiness and beauty in the honing of the shape and forms."