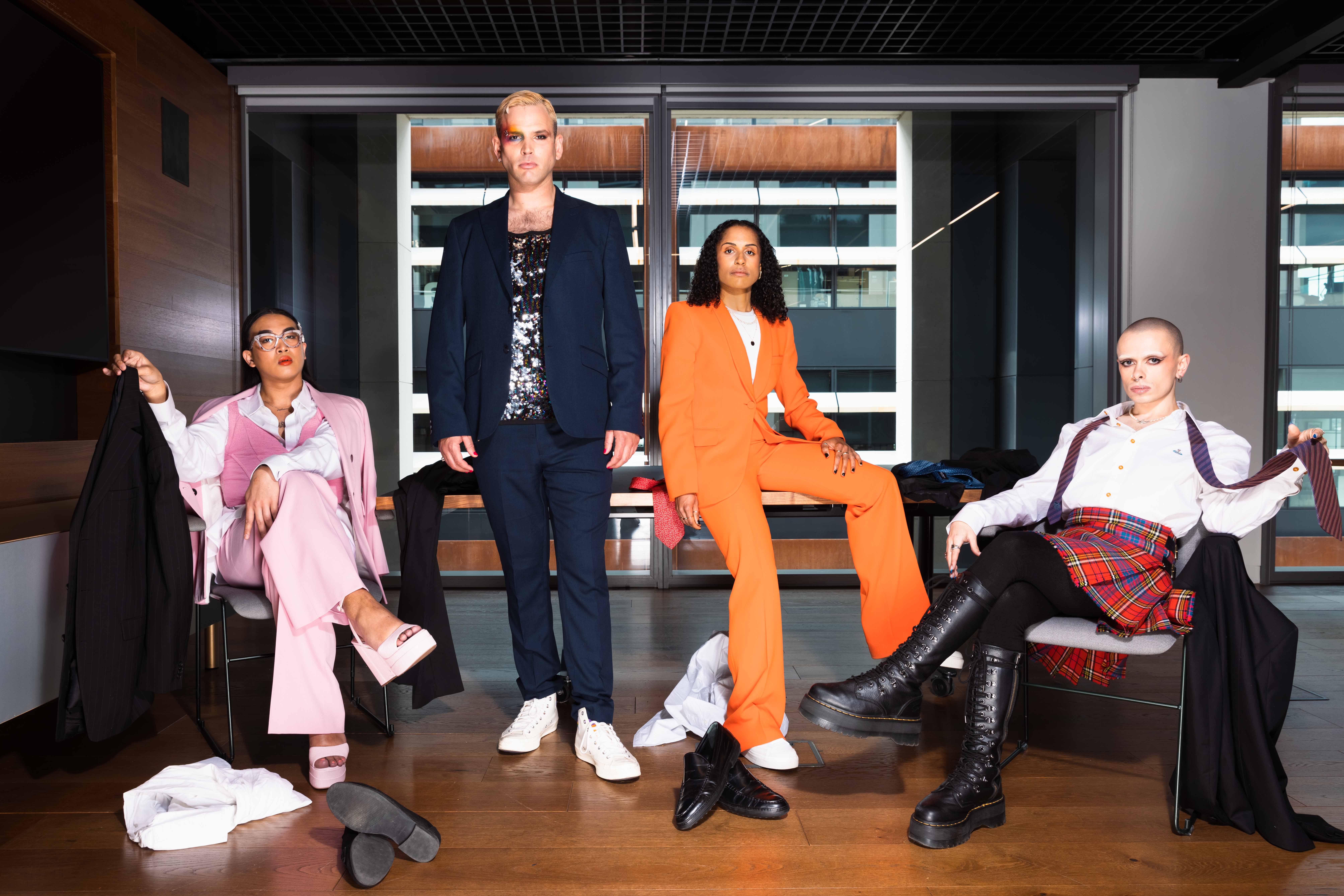 We spend most of our time at work – and yet, workplaces can be restrictive and prevent us from expressing our true identities: in what we wear, how we speak, and how we are interacted with.

Intertwined with that, in some cases, can be discrimination.

It shouldn’t happen and yet it does, leading to more self-policing and discomfort at work.

New research from The Body Shop – which is launching a Work in Pride Charter to benefit queer employees – found that of 2,000 people in the LGBTQ+ community, 35% fear being ostracised or rejected at work and 30% either know someone, or have personally experienced, workplace bullying due to their sexuality or gender identity.

As a result, 56% act differently at work than in personal lives to avoid discrimination and 49% dress differently to fit in. Over a third go out of their way to hide their gender identity or sexuality at work.

Shockingly, as many as one in four have taken leave due to harassment at work.

Keane Spenle, who uses the pronouns they/them, has experienced discrimination at work on multiple occassions.

‘Unfortunately, I’ve experience a broad spectrum of discrimination across each role I’ve had in my working career – and I’m only 23,’ Keane says.

‘I’ve had co-workers square up to me, I’ve had relentless taunting and even quit one job with immediate effect, as I felt scared for my safety.

‘Day to day microaggressions are a form of discrimination, too.

‘Being called “dramatic”, “camp” or a “diva” in a professional environment is not acceptable.’

These experiences have ‘torn down’ their confidence, especially as so much time is spent outside of work ‘reckoning and becoming comfortable’ in their identity.

Keane now feels like ‘an empowered and successful non-binary individual’, but these instances have felt like setbacks.

‘I’ve been made to feel secondary or only celebrated when I’m acting out LGBTQIA+ clichés,’ they add.

‘In previous jobs, I’ve been editorial with my identity, withholding parts of myself that are truly authentic in order to keep myself safe.

‘I hated it and it made me more determined to find safe working spaces that accepted me in my entirety.’

She says: ‘I experienced discrimination at the workplace.

‘I overheard comments spoken about the LGBTQ+ community that were derogatory and very offensive.

‘This then made me withdraw back from those colleagues at work and also made me feel like I had to hide my sexuality.

‘It then escalated into comments made certain male colleagues with one going as far to say that “lesbians should not be teachers,” with the idea that I would somehow indoctrinate the pupils.’

This experience isolated her at work, which was made even worse by the fact she lived on-site at the boarding school, with these other staff members.

On a career level, feeling this way can stifle someone’s professional growth – equating to lost money, status and progression.

Eventually, it became a ‘struggle’ for Karina to go into work and she developed an unhealthy coping mechanism.

‘I started to create this persona that just wasn’t authentically me and tried to project this to these people I worked with,’ she explains.

‘It made me feel as if my sexuality was wrong and that I should not be this way, I really started to question myself.

‘In contrast to now, I am so comfortable with who I truly am and I feel sorry for those colleagues that I worked alongside who have that narrow-minded outlook. As a teacher it worries me that these kinds of people are in my profession attempting to educate the next generation.’

Now, she’s moved onto a different teaching job, where she feels accepted.

It did take Karina more time to ‘come out’ to her colleagues though, as she found herself ‘holding onto the horrible comments’ made at her last workplace.

This left her with fear and anxiety around being openly gay at work. Previously, she’d hide plans to see her partner and other tells of her sexuality.

For her, that is now thankfully a thing of the past.

Homophobia at work is still something some workers are living with daily.

Arian, a 34-year-old Filipino immigrant who is non-binary, at first didn’t understand the slurs, such as ‘bender’, being thrown at them – as English is not their first language, so it was unfamiliar territory.

They say: ‘One of the main ways I’ve experienced discrimination where I work is mostly through looks because of how I present myself.

‘I dress very flamboyantly bold – especially now because most of the time I present female.

‘There’s a very distinctive way a person looks at another person when they want to low-key be shady to them.

‘The majority of the time, this happens with people visiting the office – but sometimes a former manager would join in which made me feel even more helpless and alone.’

Eventually, they ‘reclaimed’ any derogatory comments and tried to ‘turn it into banter’ to take the power back.

Arian refuses to hide themselves, making who they are clear even in interviews.

‘I see my identity as an asset and a strength and that’s something I will never hide,’ they add.

‘I truly wish what I can give some of my confidence to other people who are struggling because if they go be their fabulous self, a target could be put on their back and they could open themselves to further discrimination in a workplace set-up.’

With Pride month fully underway, it’s clear workplaces still have work to do to ensure their LGBTQ+ employees are safe and free of discrimination.

The Body Shop’s Work in Pride Charter can be read here.

This year marks 50 years of Pride, so it seems only fitting that Metro.co.uk goes above and beyond in our ongoing LGBTQ+ support, through a wealth of content that not only celebrates all things Pride, but also share stories, take time to reflect and raises awareness for the community this Pride Month.

And we’ve got some great names on board to help us, too. From a list of famous guest editors taking over the site for a week that includes Rob Rinder, Nicola Adams, Peter Tatchell, Kimberly Hart-Simpson, John Whaite, Anna Richardson and Dr Ranj, we’ll also have the likes Sir Ian McKellen and Drag Race stars The Vivienne, Lawrence Chaney and Tia Kofi offering their insights.

During Pride Month, which runs from 1 – 30 June, Metro.co.uk will also be supporting Kyiv Pride, a Ukrainian charity forced to work harder than ever to protect the rights of the LGBTQ+ community during times of conflict, and youth homelessness charity AKT. To find out more about their work, and what you can do to support them, click here.